Something was up. It was December 28, 1966, the Christmas holiday season, and Phil “Saddle” Turnock (17) and Bill Gilchrist (17) were having a quiet night in with their “mod” mate Tony Slade (18) at their Halswell Road rental in suburban Christchurch.

Normally, the Halswell Road mods would be down at their local hangout, the Stage Door dance club in Hereford Lane.

Normally, the Halswell Road mods would be down at their local hangout, the Stage Door dance club in Hereford Lane, “pulling birds” and dancing to new resident band Our Generation – but tonight they had other things on their minds, such as the violence five days earlier at their mate’s Rutherford Street digs, which was finally broken up by police with dogs. Earlier in the evening, several carloads of rockers had arrived uninvited at the mod party and started stirring shit.

Inside, Bill Gilchrist had been felled by a rocker then kicked in the mouth while on the ground. His brother Jim and Phil’s younger sibling, Mickey, copped the worst of the aggro though: Jim was beaten badly by a couple of rockers outside and Mickey was smashed in the face with a bottle while going to Jim’s aid. He needed 11 stitches.

“Saddle” Turnock emerged from the house just in time to see the punch-up turning nasty and grabbed an empty bottle, swinging it harshly at the offending rocker.

At the time it seemed like natural justice, an eye for an eye, but things are rarely that simple when you’re 18. The bottled rocker was Michael Byrne. His brother, Francis Byrne, himself one of the instigators of the Rutherford Street violence, swore revenge on Turnock. That desire would percolate and sour over the next five days, with tragic results. 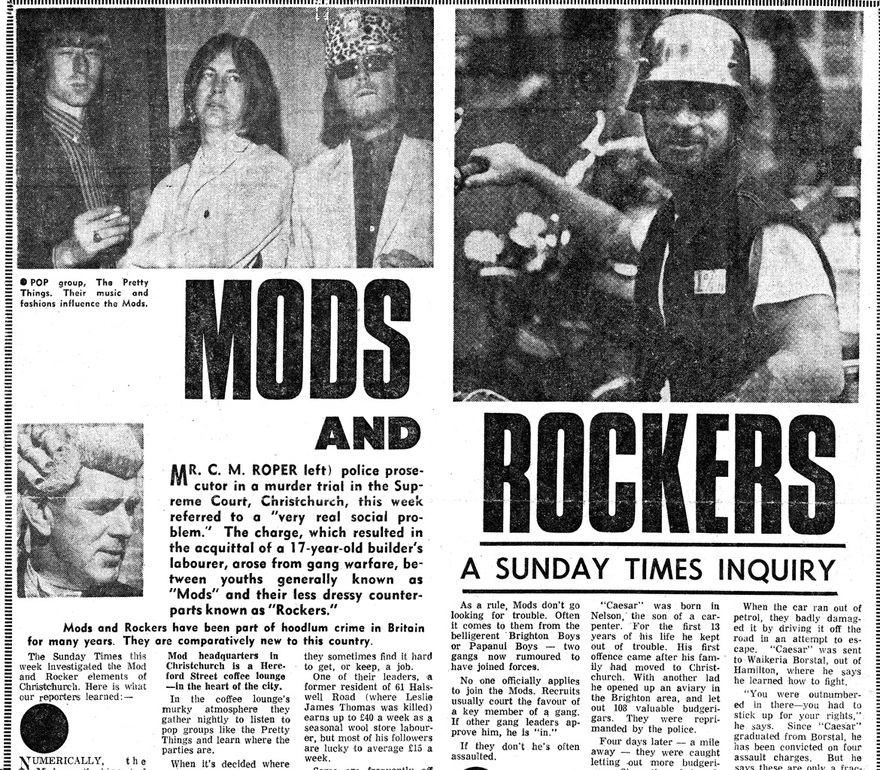 Mods and Rockers in The Sunday Times, 1967 - Jeff Smith collection

Tit for tat violence wasn’t a new thing in the hard world of teenage Christchurch youth cults. Conflicts between mods, rockers, and surfies were common, but it mainly came down to fists and boots. That night however, the mods decided fists and boots might not be enough.

Conflicts between mods, rockers, and surfies were common, but it mainly came down to fists and boots.

Inside they had two loaded rifles – one .303 and a .22. Word had been circulating all week that Saddle was in line for a savage revenge beating courtesy of Francis Byrne, a man not to be taken lightly, as past convictions for assault and possessing a plastic hose sheathed iron poker testified.

It was amid this climate of fear and apprehension that Saddle Turnock, Bill Gilchrist and Tony Slade heard four cars draw up outside their home at 61 HalsweIl Road just after 10 pm. Out spilled up to 25 rockers, who shambled noisily onto the roadside, just as Turnock’s mate Kenny Duff told them they would. Five minutes earlier he had turned up at Halswell Road and said that the New Brighton rockers were on their way to get Saddle for bottling Michael Byrne, under the guise of coming to a party there.

With the house quiet, it must have been clear to the restless rockers that the “party” they were there to attend wasn’t that happening. A pity really, as they’d already unpacked their party toys – motorcycle chains, empty beer bottles and hefty chunks of wood.

Bolstered by piss and overwhelming numbers, a rocker called Tiny approached the door, knocked and asked a scared Bill Gilchrist if there was a party there. Gilchrist said “no” and closed the door. But not before he spied the New Brighton boys outside.

He could hear them yelling and screaming that they wanted Saddle. He and Turnock backed off to the lounge and grabbed the rifles while Slade grabbed a carving knife and clicked off all but the hall light.

They gathered in the hallway. Turnock and Gilchrist screamed out a warning that no-one should come in or they’d be shot.

The door was kicked in from the outside and several empty beer bottles were thrown into the hallway. Four rockers entered, but seeing the guns quickly heeded the warning to get out. The door was then closed again.

When it was kicked open once again, Gilchrist fired his .303 from the hip out the doorway into the crowd of rockers. A deadly hollow-tipped bullet travelled 30 feet and struck 18 year old Les “Lightning” Thomas high in the right shoulder, exploding on impact and exiting through two wounds in his back. Thomas was dragged out of the line of fire by Francis Byrne, but died from his wounds and related trauma on the way to hospital. Police found a knife in his boot and gave evidence that Thomas knew that a confrontation was planned that evening, and that he had personally armed an accomplice with an iron rod. His black leather jacket, which bore a Devil’s Disciples patch, was also presented in court.

Any one of the rockers and their followers outside that night could have been in Thomas’s place. Fate decided the bullet would be his.

Rows of mods and rockers glared hatefully across the courtroom at each other.

In April 1967 a jury found Bill Gilchrist not guilty of murder or manslaughter. The single shot was, they said, self defence. The trial went for three days, shocking prim Christchurch with its disclosures of youth gang crime and idle teenagers drinking, having sex and fighting. As if the killing wasn’t enough, the lower court depositions hearing brought scenes of new hostility.

At the hearing back in February, rows of mods and rockers glared hatefully across the courtroom at each other. Conflict erupted when a female mod came face to face with a girl from the enemy camp outside the court ... the rocker let drive with a right hook, fist clenched; as it landed she spat at her victim, “Take that mod bitch.”

The trial proper would itself be awash with half-truths, outright lies and unasked questions. In his first statement to police, Gilchrist denied shooting Thomas, claiming another unidentified youth fired the gun. He soon changed his story, claiming the gun had a hair trigger and he’d fired into the air by accident. The gun was subsequently found not to have a hair trigger and in all probability to have been fired from hip level. The question still remained why had Gilchrist pumped another live bullet into the firing chamber after he “accidentally” fired the rifle the first time. Do people who accidentally discharge weapons think about firing again?

Then there was the earlier visit by Kenny Duff, warning the occupants of the rockers’ imminent arrival. Why didn’t the three mods just flee? By staying there, did they make conflict inevitable? Or did they expect their fellow mods, who departed earlier that evening looking for rockers to fight at New Brighton, to be close by? Neither question was asked in court.

The prosecution fared little better. Rocker after rocker would repeat the “party” line (literally). Francis Byrne swaggered before the court, proclaimed he was on probation when the incident happened and couldn’t possibly have wanted to be involved, even though his probation didn’t stop him assaulting two mods five days earlier at the Rutherford Street party.

When asked whether he was a rocker or a member of a gang, Byrne, obviously a fan of Marion Brando’s Wild One, uttered he wasn’t a member of either, stating, “I’m mostly for myself.”

What was plain to the jury though, was the intent of the rocker raiding party – to seriously injure Saddle Turnock and at the same time teach their rivals, the mods, a lesson in teen tough. Ultimately the jury decided that the rockers went looking for the mods in both incidents, leading to the killing.

After his acquittal, a subdued Bill Gilchrist huddled with his mother and brother Jim at an Auntie’s house in Bryndwr, then quickly and quietly left Christchurch for Auckland the next morning, spurning his fellow mods’ joyous celebration, where they toasted him and danced to the Pretty Things and other R&B heroes in fine mod style. The trial, it seemed, was simply another mods and rockers confrontation. And this time the mods had won. 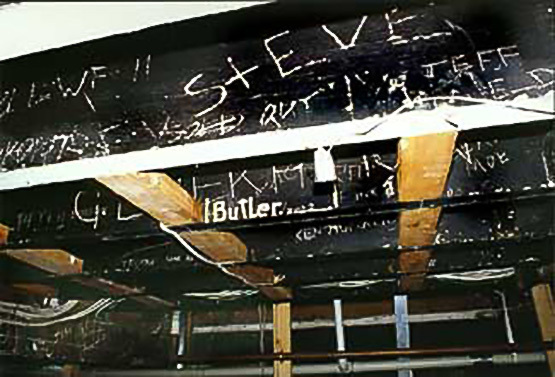 Mod/rocker tensions simmered over the coming months; graffiti would appear around town proclaiming “Mods Killed Lightning”, but the violence largely ebbed and the rumours that Gilchrist had aimed from the shoulder and deliberately shot Thomas retreated into rocker folklore.

Many of the rockers drifted off to bikie gangs or jobs, while for the mods it was nearing the end of an era: Chants R&B were long gone, their hangout, the Stage Door changed its name to the Ram Jam and closed, and the mods too drifted off to other cities, or to marriage and jobs.