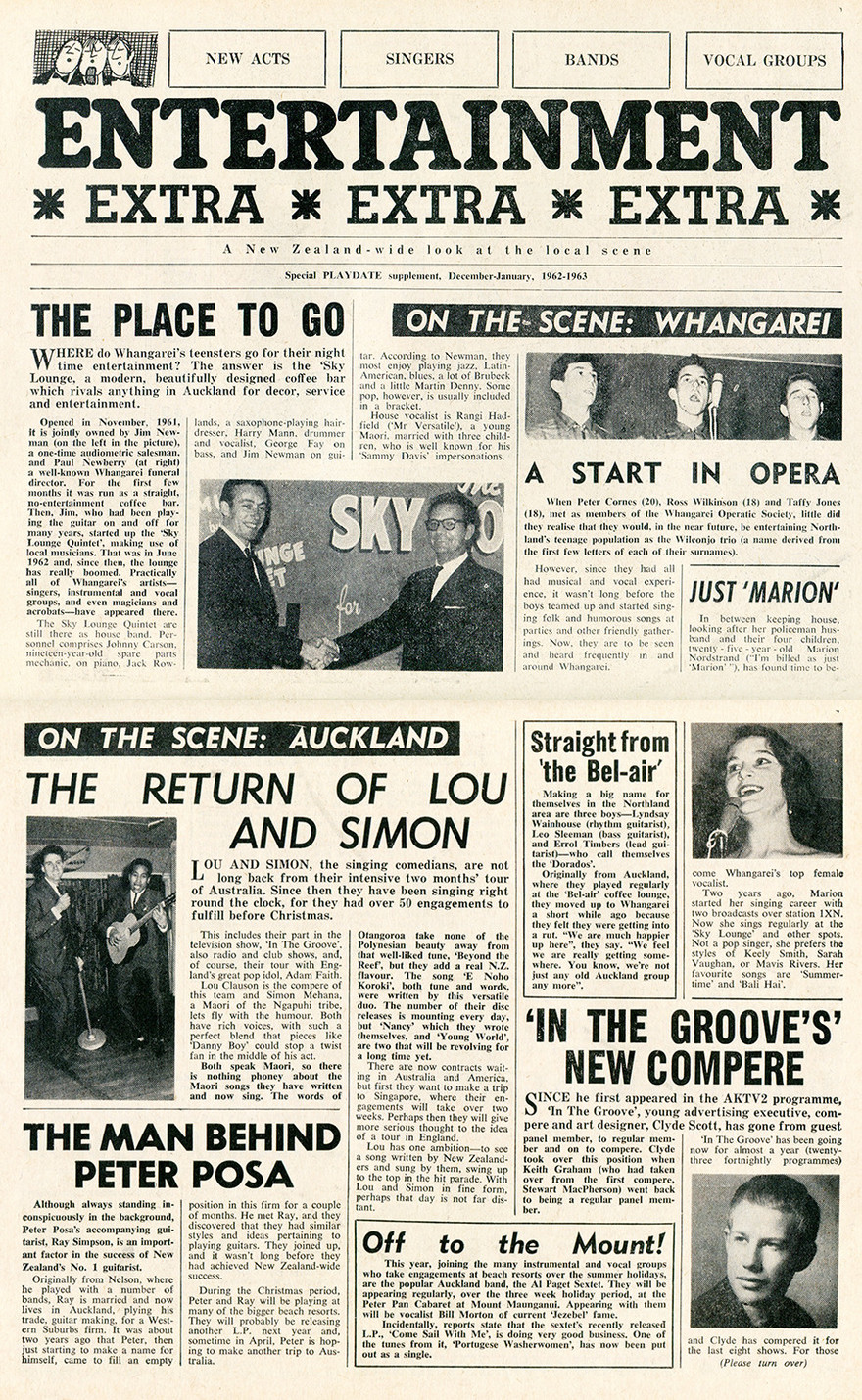 In the summer of ’62, where did Whangārei’s teenagers go for their night time entertainment – or teens in Invercargill? Playdate provided the answers in its December/January issues of 1962 and 1963, when the magazine produced supplements describing nightlife on offer throughout the country. The 12-page entertainment special of 1962 was printed sideways in the magazine, and laid out newspaper style. The many stories give an idea of the talent of the era, and the context in which they worked. In Whangārei, a 25-year old called Marion sings jazz, when not keeping house, looking after her policeman husband and their four children. In Auckland, Lou and Simon are back from overseas, singing in te reo. Many acts are off to play Mt Maunganui for the season, and pioneering TV pop show In the Groove has a new compere, Clyde ‘Gravedigger’s Rock’ Scott. (To enlarge these images, click on them, open in a new tab, then expand.) 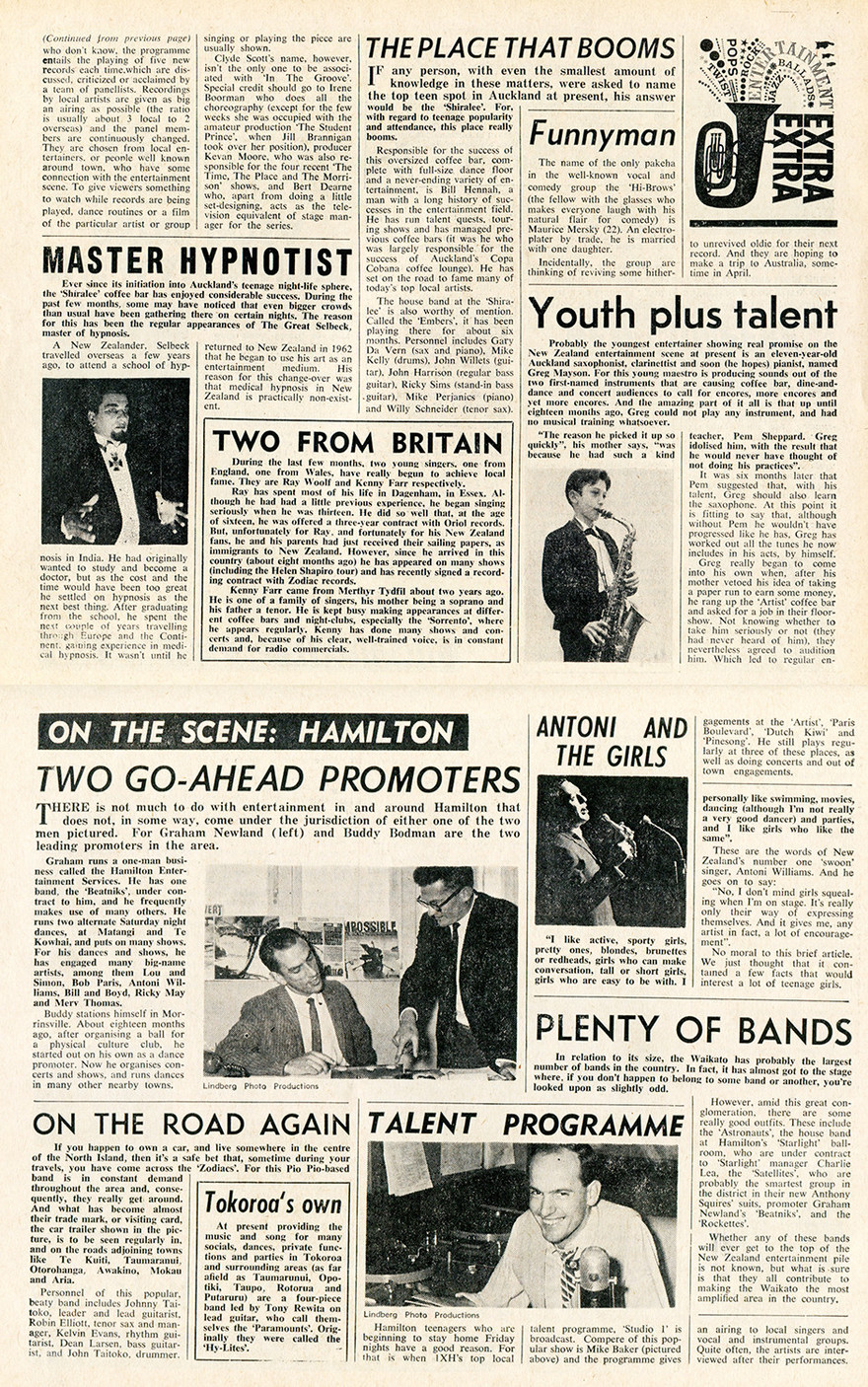 In Auckland, the Embers hold court at the Shiralee – an oversized coffee bar with a full-size dance floor – with Mike Perjanik and Gary Daverne among the musicians. Ray Woolf has recently arrived from Britain, and Toni Williams likes all kinds of girls. In Hamilton, new bands play the Starlight ballroom, though some teenagers stay home Friday nights to hear future Radio Hauraki DJ Mike Baker on 1XH. Touring the Waikato are the Zodiacs from Pio Pio. 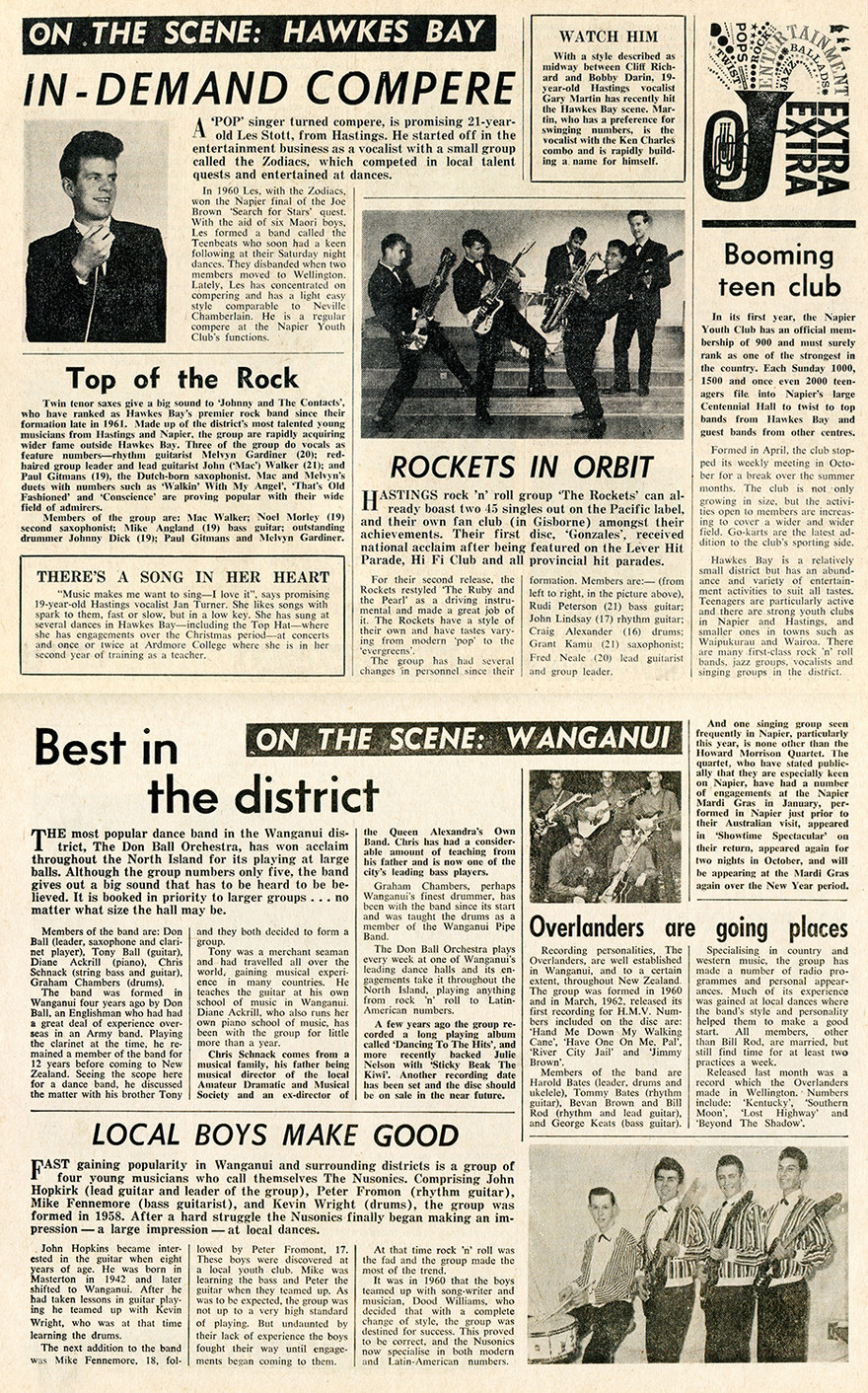 Napier’s Youth Club is booming, with 900 members after only a year. Each Sunday over 1000 teenagers flock to the Centennial Hall to twist to top Hawkes Bay bands such as Johnny and the Contacts and The Rockets. In Whanganui, the Don Ball Orchestra – a quintet – recently backed Julie Nelson on her single ‘Sticky Beak the Kiwi’. The NuSonics have been going four years, and are now incorporating Latin-American numbers in their rock’n’roll sets. 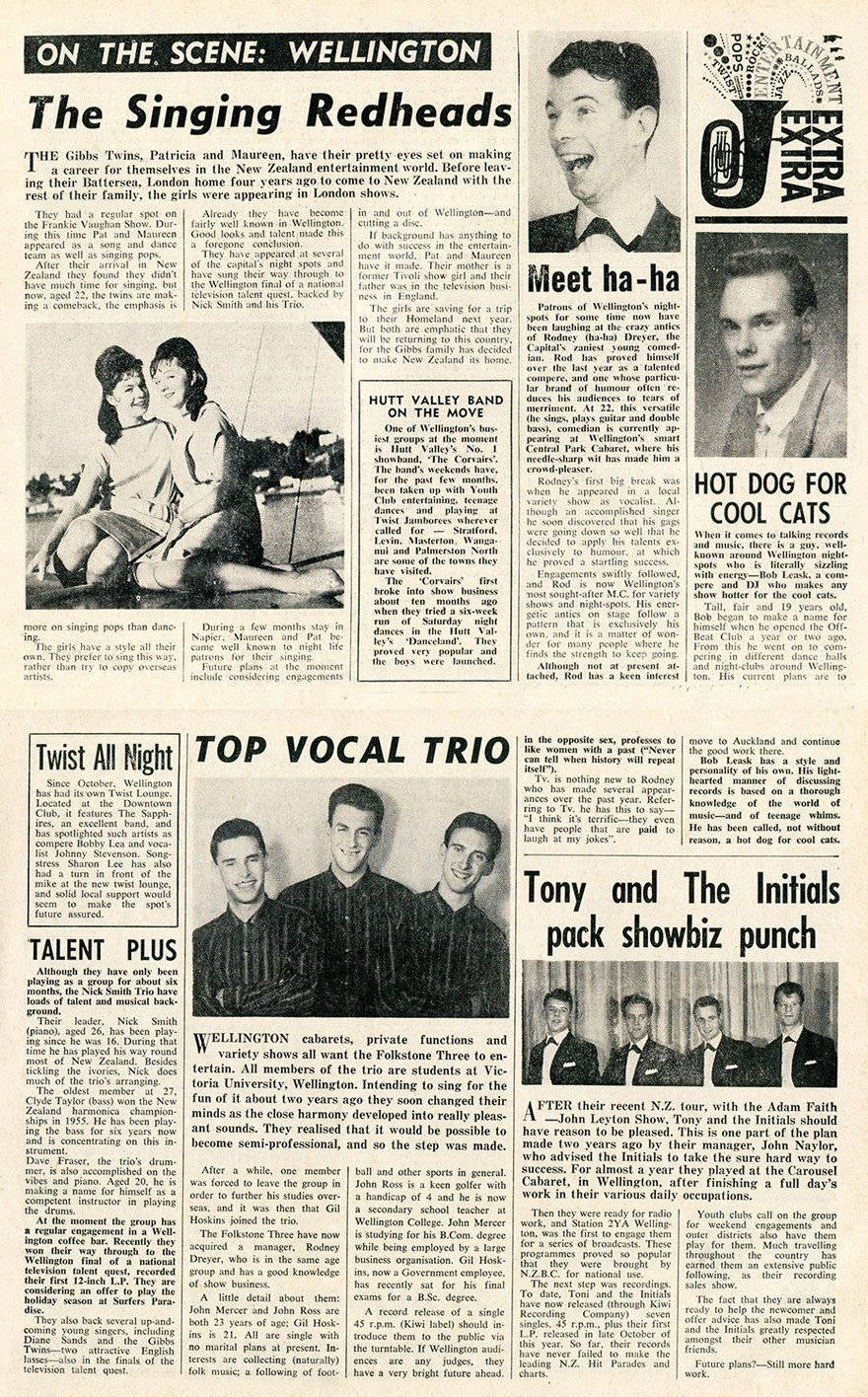 In Wellington the Gibbs Twins are not Bee Gees, but the red-headed Gibson sisters; the Folkstone Three are about to release the first of several singles; Nick Smith leads a hot jazz trio, with 20 year-old Dave Fraser on drums; and – fresh from a national tour with Adam Faith – Tony and the Initials pack a showbiz punch. 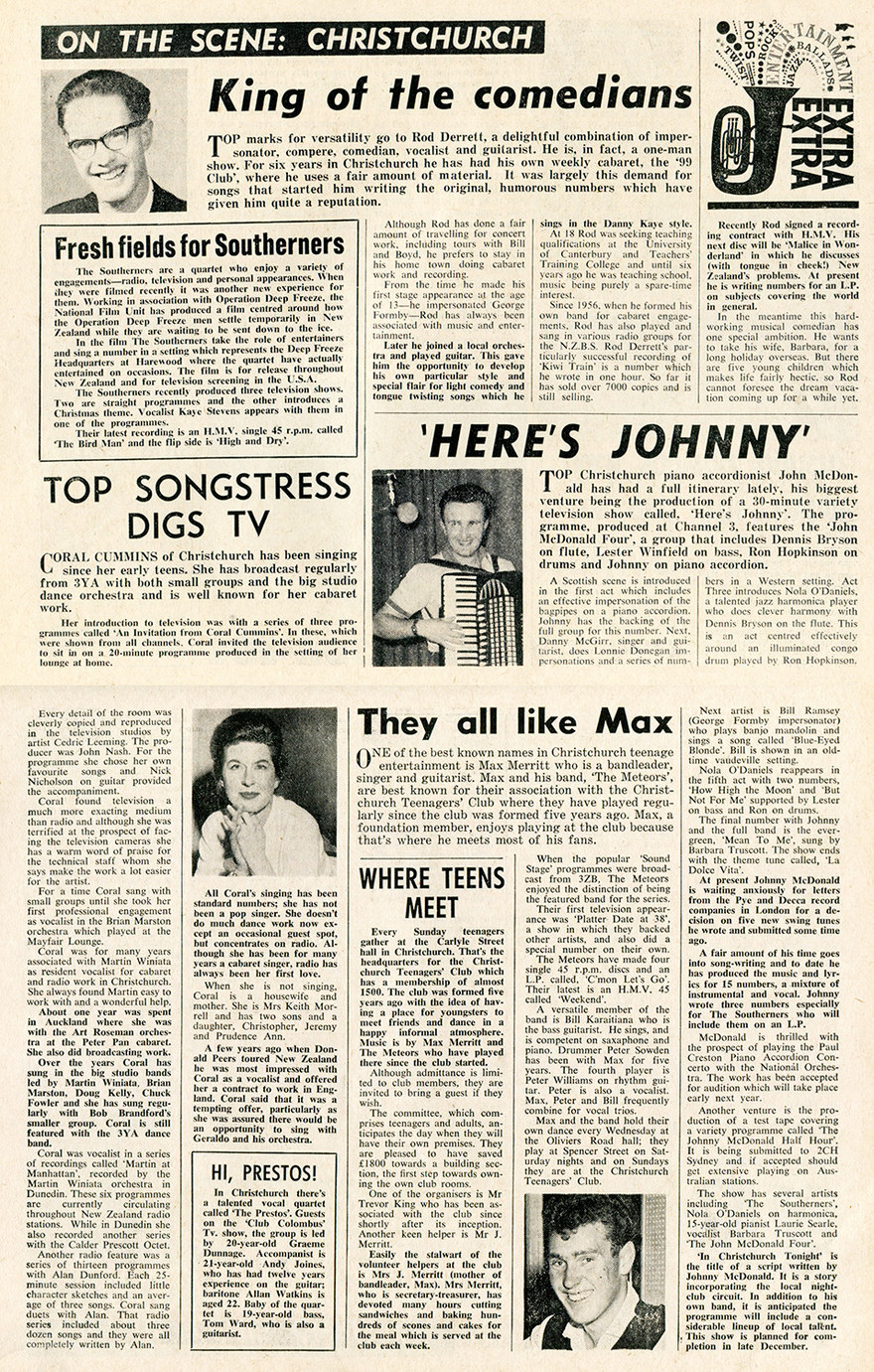 Musical comedian Rod Derrett is packing the crowds into the 99 Club in Christchurch, and his ‘Kiwi Train’ single recently sold 7000 copies; big band singer Coral Cummins now prefers the radio studio to ballrooms; and at Carlyle Hall, Max Merritt and the Meteors hold reguluar dances for the Christchurch Teenagers' Club. 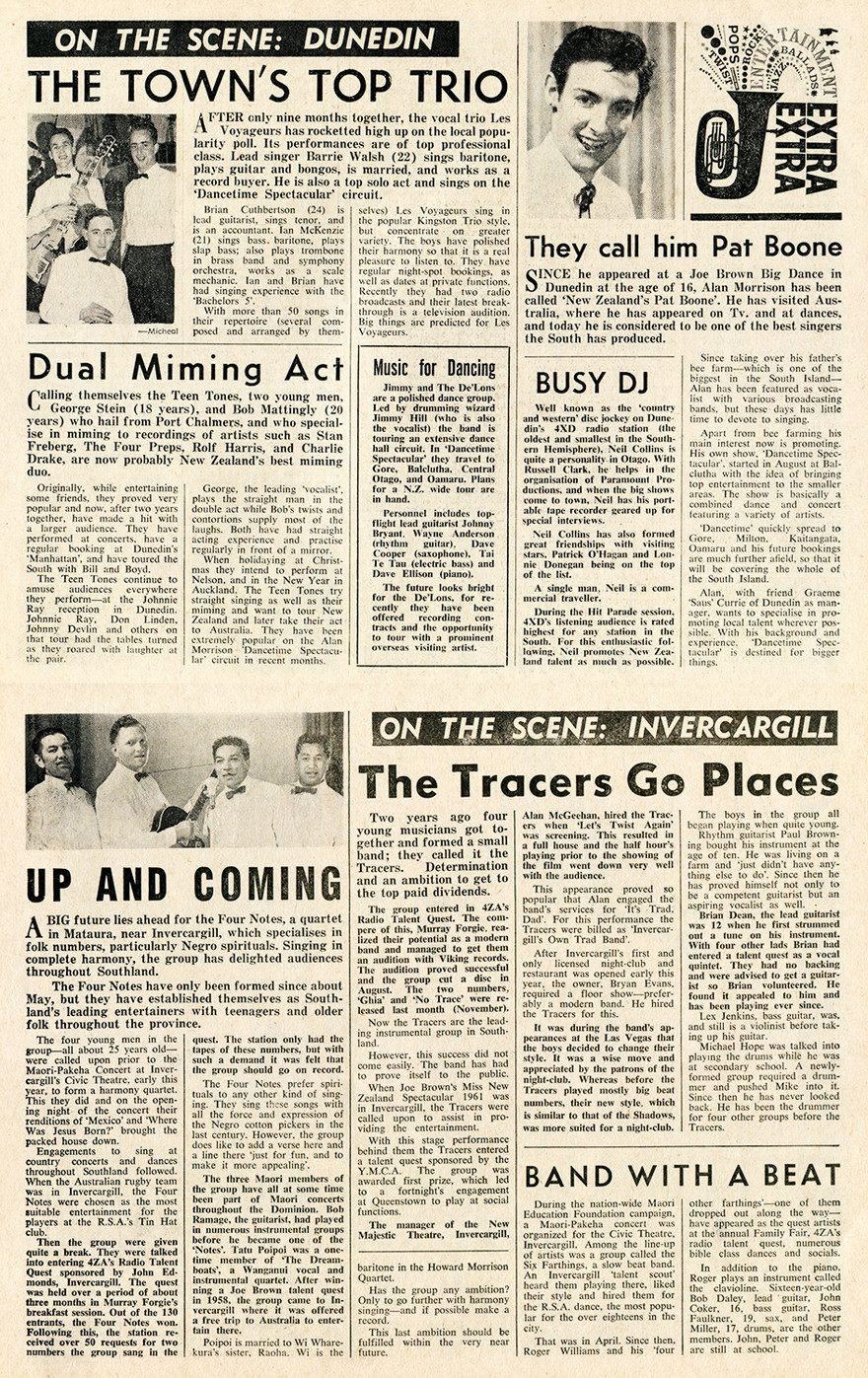 In Dunedin, drummer Jimmy Hill leads his own band, Jimmy and the De’Lons; he will soon play with Ray Columbus and the Invaders. Broadcaster Neil Collins begins his long career at 4XD, and 16 year-0ld Alan Morrison is the city’s Pat Boone. Mataura’s Four Notes perform Negro spirituals throughout Southland, and Invercargill’s The Tracers backed local groups for the visiting Joe Brown Miss New Zealand Spectacular.