When Don Richardson framed up his first “festival of jazz” in 1955, little could he have known that his live concerts would become the vehicle – let’s call it a hot rod – for the debut of rock’n’roll in the capital.

Who would have predicted it? When the first show kicked off in the ornate Wellington Town Hall on 16 May 1955, it felt like the same old formula: swinging but sedate. An older, polite crowd sat there through a slew of Dixie classics, Glenn Miller staples, blues songs, all peppered with comedy routines.

And out front was tousle-haired, bespectacled Don and his Big Band, a bunch of smooth jazzers in their fetching powder-blue jerseys and bow ties. Among the tunes played were ‘One O’Clock Jump’ and ‘Tuxedo Junction’, and the highlight of the night was a powerhouse trumpet solo by prodigy Mike Gibbs. 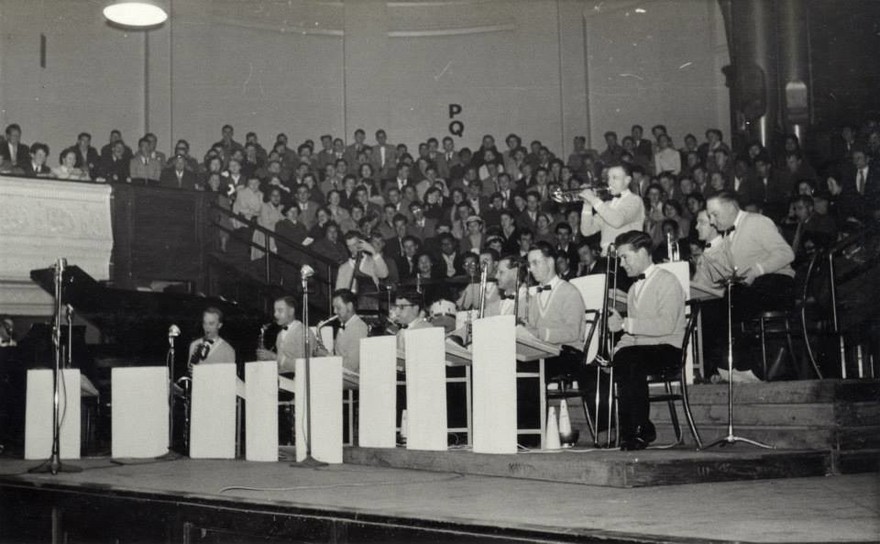 It may sound tame, but the Dominion reported that the Town Hall was “jammed tight with hand-clapping, foot-stomping, shrieking fans”.

By the fourth concert in the series, on 21 November – a Monday – the enthusiasm had escalated. Many got up and jived in the aisles as pianists Bob Barcham and Bill Hoffmeister performed Bill Haley’s ‘Rock Around the Clock’ as four-handed boogie woogie. The song had just rocketed to No.1 in the United States, and stayed there for eight weeks. (Johnny Cooper’s version, recorded with Wellington jazz musicians, had been released in September.) 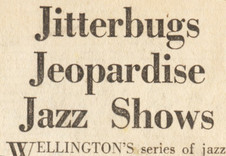 “Jitterbugs Jeopardise Jazz Shows” ran the Evening Post headline, which reported that complaints to the Town Clerk had received a firm response. Writing to Richardson, Mr B O Peterson said:

“Some of the patrons were dancing in the corridors and at the back of the gallery seats and generally acting in a manner which was entirely uncalled for and was distracting to other members of the audience who complained to the Custodian regarding the actions of these irresponsible people. When spoken to by the Custodian’s staff the persons concerned resorted to abuse and continued with their unseemly behaviour.” 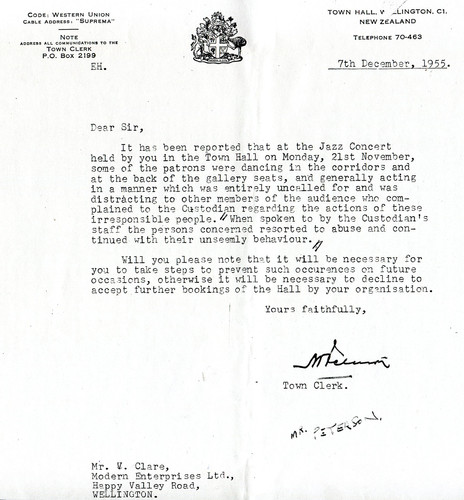 Within two years, the jazz festivals had evolved to take in the new popular music craze, rock’n’roll. Johnny Cooper made the first in-roads into the jazz set list with his versions of Bill Haley’s ‘Rock Around the Clock’ and ‘See You Later, Alligator’, backed by a small-combo version of Richardson’s big band. 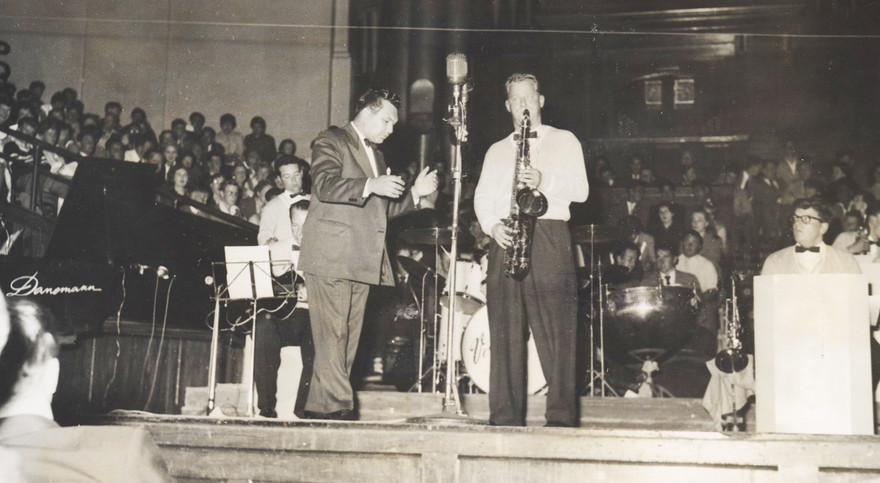 By the eleventh festival concert in August 1957, Johnny Devlin, the “New Zealand Elvis,” was topping the bill. The seats were gone: 2000 teens jived on the polished floors.

So what caused the change? And did they really try to stop the rock in 1955?

As history now shows, a “youthquake” had caught fire worldwide. It may be hard to believe today, but the New Zealand “teenager” – with their American-style fashions and music – was something brand new. Something … a bit threatening.

Most teenagers were normal kids, a few went further. These sharply-dressed “teddy boys” and “bodgies and widgies” had attitude; some, sensationally, carried knives. Like their hero James Dean. A few were strutting around Wellington and Auckland by 1955, mostly just wanting to jive.

Teddy boys were in the spotlight. In May, the worried Evening Post estimated the number living in the capital at 23, blaming them for recent outbreaks of teenage violence, accusing them of carrying sharpened bicycle chains and knives and wearing razor blades in their hats,

This first wave of teens in the capital – bored out of their brains – soon got wind of the “festivals of jazz”. “Rock’n’roll” was barely played on the radio and the live version was a mystery. The youngsters – along with a gaggle of “Teddy boys” – flocked to the September 1955 show, the third in the series.

The local hunger for rock’n’roll became clear that night in September. A bemused reporter from the NZ Listener recorded: “The under 20s, maybe half the audience, shrilled and stamped their feet. The other half clapped and tried to look elderly and tolerant.”

When the Bill Haley song was played, the teens went ape: “Upstairs, where they could be seen by everybody in the hall, two Māori girls were jitterbugging uninhibitedly; a Teddy boy and girl – anxious to cash in on the limelight – pushed their way along a row, then sheepishly had to push their way back again when the aisle proved too narrow for rug cutting.”

The Evening Post review, too, skewered the Teddy boys: “Of course there was a sprinkling of exhibitionists. There was, for example, the genuine Teddy Boy who crept furtively in out of the rain, whipped off his plastic coat, and quickly adjusting his finery before marching into the throng with what he had of a chest flamboyantly poked out.  Yes, here were the velvet lapels, the string tie, the long haircut, the inch-thick soles, the drainpipe trousers, and velvet waistcoat … and then the music!”

The word was out: the old Town Hall was the place to rock. The fourth concert, on 21 November 1955, saw the aisles thronged with jivers. This was the show that caused the Town Clerk’s angry letter, which included a veiled threat that bookings for future concerts might be declined: “Will you please note that it will be necessary for you to prevent such occurences on future occasions, otherwise it will be necessary to decline to accept further bookings of the Hall by your organisation.”

Richardson and Clare capitulated. Over the first half of 1956, the programmes for the fifth and sixth festivals excluded all rock’n’roll numbers. And it is fair to guess that the houses got smaller too.

In September 1956, the film Rock Around the Clock began heavily promoted screenings in New Zealand cinemas. In attended were the police: the authorities didn’t want a repeat of the “teddy boy riots” that broke out in London and other British cities when the film opened there. 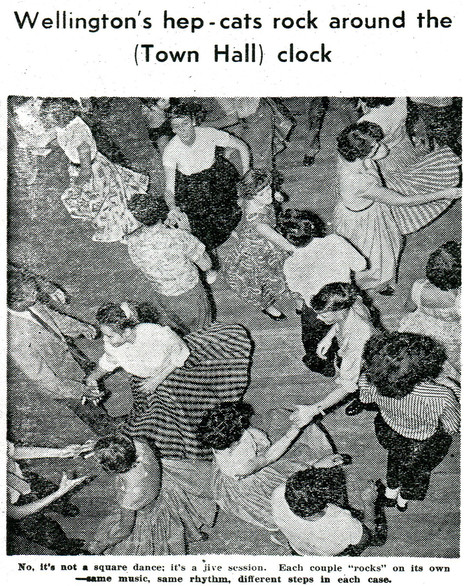 In New Zealand, the film was a box office smash. Some of the fear-mongering was justified: in Wellington, a cinema manager was hurt in a melee during a screening.

Richardson decided to bite the bullet. US rock’n’roll hit ‘Seventeen’ was played at the eighth festival, on 24 September 1956, without, as the Post put it, “raising any upset, alarm, enthusiasm, or more than the regulation number of tapping feet.”

Richardson and Clare decided the rock’n’roll cat was out of the bag. On 15 December 1956, they went for broke in the ninth festival. Wowing the teenagers was local rock’n’roll star Johnny Cooper, whose version of Bill Haley’s hit ‘See You Later, Alligator’ – with Richardson’s Festival Six as the backing band – had been released in May.

The programe still featured big helpings of Dixie, clarinet solos and torch songs. But a grinning Cooper – whose country recordings for HMV NZ gave him the nickname “the Māori Cowboy” – made two appearances with the Richardson Big Band, the show closing with his second. They had reinstated the rock!

At the tenth show, held in the summer of 1957, Cooper performed no fewer than 10 rock’n’roll hits, and the audience sang along to all of them.

The Evening Post reported on 21 February: “The audience at last night’s tenth jazz festival in the town hall can be forgiven for their preference for rock’n’rolling. The uninhibited dance rhythm held sway at the end of each half of the concert, proving itself to be stil at the peak of popularity with teenagers.”

The night of 11 March 1957 can probably be seen as the moment rock’n’roll was officially welcomed to the capital. Richardson even changed the name of his ‘Jazz Concerts’ to ‘Rock’n Roll Jamborees’, even if much of the old Dixie filler remained. The rows of constricting chairs were ripped out: teens could jive for three hours.

“This is your big chance to SEE … HEAR … DANCE … to the greatest galaxy of musical stars ever presented to the New Zealand dancing public,” ran the banner headlines.

An added extra was live demonstrations of rock’n’roll, helping jivers polish their moves. Milton Mitchell, a 30-year-old dancer from across the Tasman, later claimed he taught 50,000 Kiwis how to rock. In the build-up to the March 1957 show, a series of photos in the Post showed Mitchell “throwing his partner over his shoulder in a circular throw to get her in the position in which she is looking between his legs.” 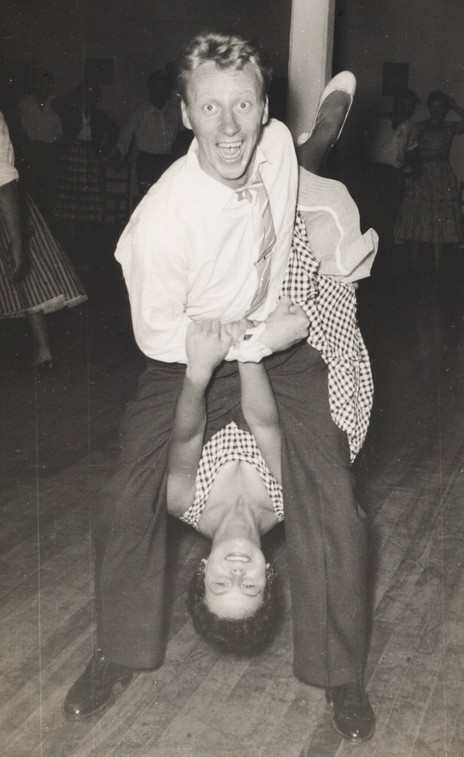 The Post signalled its approval: “Town Hall Thundered to Rock and Roll – Without Riot”. And after two years of patiently waiting to rock out, the teens went wild.

“In humid, almost stifling weather many couples showed boundless energy by dancing non-stop by the hour. Others were exhausted just looking on. Unlike some galloping ballroom performances, there were no serious collisions. Fast moving couples kept to their own few feet of floor. Most striking impression of the evening was the high standard of behaviour from a very mixed gathering.”

Alongside bill-topper Johnny Cooper was a largely unknown singer named Johnny Devlin: it would be nearly 10 months before he performed in Auckland. The former Whanganui bank clerk was poised to be New Zealand’s biggest rock’n’roll star of the 1950s. 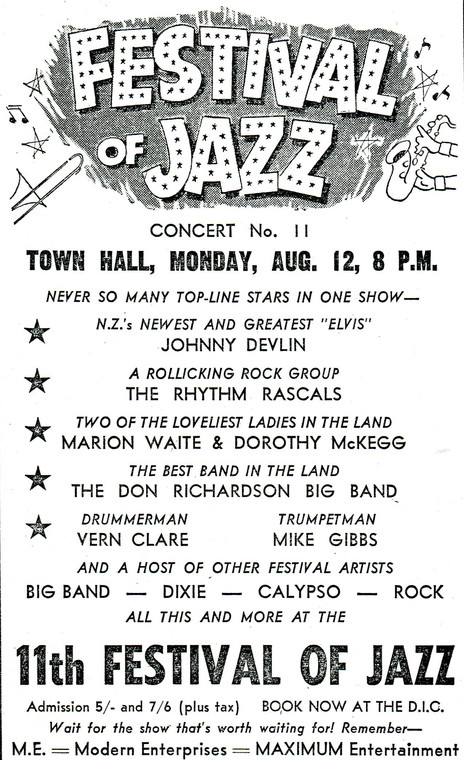 The Rock’n’Roll Jamborees went on the road, with shows in Palmerston North and Whanganui in March, and a repeat in the capital in April. On 12 August 1957, the eleventh festival went ahead in a Town Hall once again crammed with ecstatic jivers dancing to Johnny Devlin. Rock’n’roll had won the day in the capital.

Richardson decided to return to the old festival format. Some jazzers, uncomfortable with all the rowdiness, pulled away. The Town Hall’s smaller concert chamber would soon host a series of shows called (pointedly) Jazz for Listening, where dancing was discouraged.