Auckland, 1979 – There’s an interesting assortment of people here tonight at Auckland’s Mainstreet nightclub. Philip Mills, relatively new to this type of terror, watches the back-slapping, hand-shaking and greasing in general; friends old and new pop in to re-introduce themselves; the odd groupie makes a play here and there; and the city’s celebrities come and go with words of wisdom and congrats. 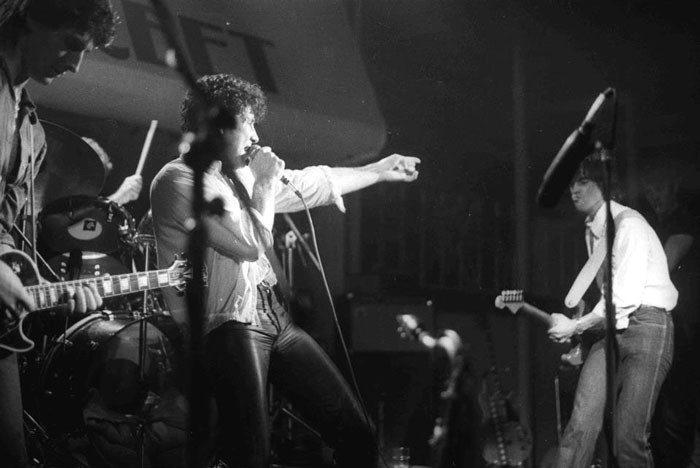 Graham Brazier stands against the wall, utterly defeated, devoid of energy. Harry Lyon and Lisle Kinney quietly share a beer. Dave McArtney, propped in the corner, talks with a friend. Only Ricky Ball, rock’n’roll lout that he is, seems prepared to hoon up all night.

Inside the club, seats are available. Half of the SRO crowd have left. After all, it’s 2am on a Monday morning: unless you keep rock’n’roll hours it will be time for work in a few hours. The scantily dressed waitresses are actually asking customers if they’d like another drink. The same customers who until recently couldn’t bribe, threaten or sweet talk these lovely young ladies into fitting them on their agenda and instead had to barge their way to the bar to join the other hundred or so people with the same problem.

Andy Anderson, MC for the night, says about the evening’s stars, “My only complaint was they weren’t loud enough.” Hmm, I wonder if that guy over there with eggplant ears agrees with that. Old Eggplant spent the entire concert with his head thrust as far as possible into a PA speaker, swaying back and forth with a plasticine grin on his face, occasionally stopping long enough to mutter, “Far out, far out.”

A young lady, over-painted and over-primed, wobbles at the edge of the dancefloor claiming that she knew them when and as far as she’s concerned, “They’ve lost their energy, haven’t they, Rupert Dahling?” Rupert Dahling is tottering on the brink of collapse at the end of what looks like a week-long binge, oblivious to anything but whose shout it is. Alongside him an equally inebriated friend declares in what may be the most succinct comment of the night, “Well I reckin dey cud blow any band in der land right off the fuggin’ stage.” Yes, opinions differ, but for better, worse or indifference Hello Sailor are back in town.

Halfway through Hello Sailor’s Wellington Opera House concert Graham Brazier turned to the applauding audience in disgust. “What’s the matter with you people?” he demanded. “I know this is supposed to be a concert but you don’t have to sit there like you’re watching a fucking B-grade movie.”

Reflecting on that concert Brazier says, “You see, we’re an Auckland rather than New Zealand band. And even though we near sold out the Opera House the general attitude was, I think, one of ‘Okay, we’ve heard your records, know of your reputation, now show us what you can do.’ ”

“I hate doing concerts,” he continues. “The audience has got to jump around, drink piss, get out of it. Hello Sailor play best when we’re close to the crowd, when we can feed off the audience. As far as I’m concerned, these big concerts have nothing to do with rock’n’roll. I mean, it’s not ballet, it’s not theatrical drama, it’s rock’n’roll. It’s prime evil.”

Hello Sailor’s brand of prime evil began back in 1974 in a flat in Herne Bay where two budding songwriters, Graham Brazier and Dave McArtney, put their heads together. “We were strictly bedroom musicians,” Graham remembers. “Four walls were our only audience.”

Hello Sailor’s early gigs were played out in the provinces for poor pay, little thanks and no recognition.

By mid-75, however, augmented by friend Harry Lyon, they had sufficient confidence to air their compositions publicly. The line-up changed continually during the first 18 months and only became stabilised when Lisle Kinney and Ricky Ball joined on bass and drums.

Hello Sailor’s early gigs were played out in the provinces for poor pay, little thanks and no recognition. 1975 wasn’t a good year for playing 50 percent originals in disco-infested Tokoroa. Finally though, talent prevailed and by 1977 the band had come under the wing of David Gapes, recorded a single for 1ZM’s Radio Workshop, amassed an almost fanatical following at the Globe Hotel and had earned a reputation among musicians as the band to cut. That elusive deal, the recording contract, fell into their lap.

In September last year, after three hit singles and New Zealand’s first rock album (7500 sales), Hello Sailor took off for Los Angeles. Returning six months later, they openly admitted that they’d come back broke, had in fact come back to earn a fast buck. This admission has left them open to some hostile criticism. For if their return has not quite been viewed along tails-between-their-legs theories, there have been accusations of returning to take advantage of a gullible public prepared to finance the band’s fantasies.

Sailor’s decision to go to the States was a curious choice. Most New Zealand bands take things one step at a time, and after conquering New Zealand the next obvious step is Australia. And that’s been the rule of thumb from Ray Columbus and Max Merritt through to Split Enz and Dragon. Sailor on the other hand took the hard road, traded their talent in the home of rock’n’roll for a few prestigious gigs (the Troubadour and Whiskey-A-Go-Go), a pat on the back and little financial gain. A promise here and there, secure in that they have at least generated interest in the States.

But New Zealanders expect a bit more than promises and name-dropping. And even though to crack the USA would be the ultimate achievement, for most Kiwis, Australia is still the Big Smoke. If a New Zealand band cracks it in Oz then by God they’ve got to be good.

Coinciding with Sailor’s return were two other Back Home tours. Split Enz, the doyens of New Zealand rock, zipped through the country on a nine-gig tour confined to theatres which saw full houses every night. Then there’s the success story of Mi-Sex who left New Zealand only halfway up the popularity ladder yet returned from Sydney after only three months with a new image, a new repertoire, a $40,000 sound and light show and the accolades of the Australian music press still ringing in their ears. Their lightning three-week tour also saw SRO crowds wherever they appeared, including Auckland University’s Maidment theatre, a feat Sailor couldn’t repeat.

But if Sailor have come back relatively empty-handed, their American sojourn wasn’t without its highs. Ex-Bowie guitarist Earl Slick, apparently looking for talent, came across Sailor and was suitably impressed. “Slick was looking for a new band with a new sound,” Brazier explains, “and he thought we were it.” Slick took the band into the studio and cut four tracks, ‘Oleo’, ‘Trouble in Your World’, ‘Vermin’, and ‘Son of Sam’. A film clip of that last song is shortly to be screened nationally in the States on CBS’s Rock On programme.

On stage ‘Son of Sam’ is one of Sailor’s most visually exciting numbers. Played towards the end of the night, Brazier – mascara running, hair dishevelled and tank-top wringing – looks suitably demonic, no longer able to resume yer standard rock hero pose, his once-nimble movements giving way to spasmodic jerks, kicks and shuffles. On stage Hello Sailor exude a cool professionalism. Ricky Ball, the epitome of rock stamina, hammers and flails non-stop, Lisle Kinney shelters in the wings laying down a steady beat. The twin guitars of Harry Lyon and Dave McArtney exchange licks and hooks. It’s a powerhouse band, tight.

His 12-stone, six-foot frame lacks the agility of a Jagger, the brutal ferocity of a Cocker or the wastedness of a Lou Reed.

But it’s Brazier who captivates the audience, whether it be goose-stepping through ‘Boys from Brazil’, tough-boying it on ‘I’m a Texan’, or snarling his disgust on ‘Vermin’. Dressed in brown leather boots, tight red trousers, black tank top and blue sequinned jacket, he certainly dresses like your standard rock star. But what is surprising about Brazier’s appearance is his stance: angry, aloof, unsmiling and unnerving.

His 12-stone, six-foot frame lacks the agility of a Jagger, the brutal ferocity of a Cocker or the wastedness of a Lou Reed. There don’t appear to many pegs to place him on so he’s created his own, one born out of an awkwardness bordering on clumsiness. Dancing and scowling, prancing and prowling, he stalks the stage like one of his demented characters. Without the mime expertise of Finn or the pseudo-punk stance of Gilpin, Brazier possesses a unique stage presence among New Zealand vocalists. He may even be our best singer. His voice, no great shakes in the range department, does however have the power of immaculate phrasing and intonation.

What’s this? Hello Sailor’s PR man writing for Rock Express? Okay there’s a definite lack of objectivity but, dammit, even rock writers have to lay their reputations on the line sometime. My time has come. I consider Hello Sailor the best band to come out of New Zealand. They have punch and power, the best rhythm machine in the land, and the best compositional output. They’re energetic, exciting and exhilarating. Rock’n’roll is, or should be, about taking risks – playing originals in Tokoroa, playing straight rock in the Year of the Punk, moving to LA rather than Sydney. It’s about meeting each challenge head on, refusing to falter, eager always for the competition, never for the compromise. There’s no room for complacency in rock’n’roll but there’s always leg space for a band that considers no options but its own. Hello Sailor fit the bill perfectly.