March, 1979 – The day Rip It Up spoke to Sharon O’Neill her album This Heart, This Song made the national Top 20 in its first week of release. Even more impressive, it entered at No.12. This debut, apparently the highest ever by a local artist, is a heartening sign that New Zealanders are showing increased faith in homegrown talent. It is also a compliment to their taste as This Heart, This Song is one of the freshest, most appealing albums by any female singer (and/or songwriters) to be released here in quite a while. 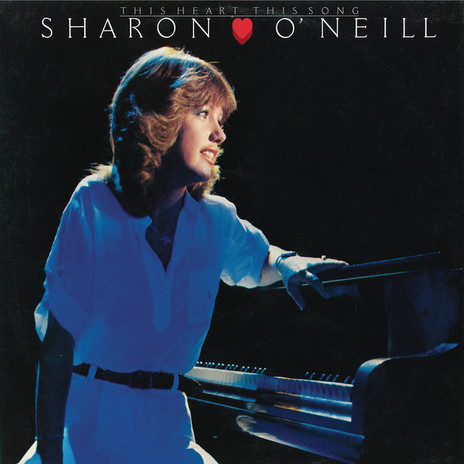 Certainly O’Neill’s music has had considerable exposure in the past year, much of it boosted by a committed record company, but that too originally stemmed from public enthusiasm about her performance on TV’s The Entertainers. ‘Luck’s On Your Table’ not only took her to third place but secured a recording contract and then became a successful chart single.

In the face of such popular acclamation and the strength of the album, it seems hard to credit that until ‘Luck’ was down on acetate O’Neill was somewhat unsure of her writing abilities. As she puts it:

“Until I could play it to people and they said they liked it objectively as a song, I couldn’t have that final belief in them. But once that happened I was away, writing a lot more songs, feeling a lot more in control.”

As a performer, however, she already had the confidence born of long experience. She began 10 years ago, singing and playing acoustic guitar in a folk trio. “We did a couple of songs I’d written but” – she laughs – “they sound funny now.”

In 1972 she turned professional, joining Christchurch group Chapta, which had won the Loxene Golden Disc the year before for ‘Say a Prayer’. After they split, the next three years were spent on the road with different bands, culminating in eight months of 1976 in South-East Asia as vocalist for Shiner. Of the years touring, O’Neill remarks, “I loved every minute of it and found it very hard to settle afterwards. But travelling is tiring and I did almost no writing. Not even in Asia where it was easier. It’d get blasé: get up about 11am, laze around the hotel pool, then do a gig. I didn’t really write until I was back, settled in one place.”

Nonetheless the years on the road were invaluable in learning to handle being a woman in a male lifestyle. “It took me a while to build up the answers,” she says cryptically. “I’m not what you’d call an aggressive person anyway but I had to learn to say what I mean.” As a writer-arranger-performer she needs that strength. “Now people consult me right from the word go in the studio. The road toughened me for that. Before I’d beat about the bush on something or just leave it. You have to know what you want and say if it’s wrong. If a male musician sees you’re floundering he’ll walk all over you. It’s a situation that can crop up so often.”

“If a male musician sees you’re floundering, he’ll walk all over you.”

1977 found O’Neill back in New Zealand, committed to writing and pursuing a solo career. That year had its frustration. She made demos of three of her own songs for EMI (including ‘Luck’) and even went to Melbourne – “on my own with just my little bag and my songs” – but without success. With guitarist Brent Thomas, she also joined Mark Williams’s final tour in 1977. But it was not until May 1978, as support act for Leo Sayer, that O’Neill first performed her new compositions on stage.

Her writing is done at the piano. “It’s in the lounge and I can’t pass it by. If I’m not playing through songs I’ll sit and fiddle with some chords. If a song appears it usually comes in a rush. Sometimes it races ahead of me and I get a bit confused trying to get it down in such a hurry.” She tries again to describe her writing process. “It sounds a bit corny to say the ideas pour out but they really do. I can’t keep up. It’s like the song’s all there and I just have to pick it up off the floor and play it.

“But,” she adds quickly, “that only happens maybe 10 minutes in a week.”

The vocal arrangements are worked on afterwards and occasionally an adjustment is made; for example a verse was later removed from the album’s title song. The lyrics are usually written with the music. “They’re going round in my head while I’m finding the chords. Very often it’s the mood I get in with the chords.”

Although the songs on the album are personal, O’Neill doesn’t see them as autobiographical. “Only the title song is about me and that’s more on the business than a love situation.” Nearly all the other lyrics share a theme of love’s transience, of women suffering through male disregard and becoming hard in order to survive. “They’re more things observed and compare to my own life. If I’ve seen something come out in other people’s experiences and thought, well, that’s obviously how it is, then I may end up writing about it.”

The songs on the album are personal, but not autobiographical.

She ponders. “Strangely, since the album, the songs I’m writing now are becoming more personal, more about music and the business. I don’t quite know why.”

She is using Wellington’s Marmalade Studios to get down some demos of new material. “It’s important because a song will only stay in my head for so long. I don’t write things down and if I get sick of playing it I may lose it.” At the moment she has enough for another album and “there’s still the odd one or two floating around.”

Meanwhile we have her first album to enjoy: 11 fine songs, sensuously sung and admirably supported by a hand-picked crew of musicians led by Brent Thomas. The overall standard is so high that even expected highlights such as ‘Luck’ and the title track don’t shine above the rest.

If the album has any shortcoming it is in the production. Radio New Zealand producer Dick Le Fort has obtained a clean, crisp sound but the fact that the basic tracks were originally recorded in a mere couple of days for 2ZM’s Group of the Month programming means that the instrumental presence is lacking in punch.

New Zealand artists cannot, of course, enjoy the same budgets for recording as top overseas stars. Because, say, Linda Ronstadt can command the world’s best studios for months just in order to get the rhythm tracks right, that doesn’t mean her album is going to be superior. There’s also the question of telent and This Heart, This Song shows that Sharon O’Neill is definitely in world class. Forget roller-skating in the USA, there’s more original and enjoyable music being made here at home.

First published in Rip It Up, March 1979