Callie Blood was already a professional singer when we put the Wide Mouthed Frogs together, which meant she was busy elsewhere. But she was one of the band’s occasional guests, and a natural part of the WMF family, as she recalls here. - Sally Zwartz 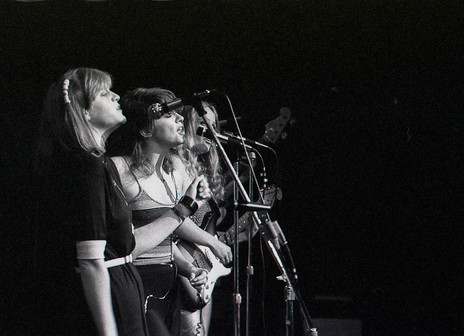 It was an amazing time, in retrospect, and we were lucky to be young and adventurous with the world at our platformed feet. (Actually, to be totally honest, we only wore the platforms to go to the loo at Andrissi’s Takeaways ’cos the floor was always flooded). We had an incredibly tight group of friends, both women and men – a support network like no other. It was a time when the word feminist wasn’t a dirty word (or worse, a non-existent word) and the expression “A Woman needs a Man like a Fish needs a Bicycle” rolled off the tongue. Friends discussed the Counterculture and I pretended to know what they were talking about. Joni talked about being “unfettered and alive” and I thought she was saying “unfed and alive” – despite my being extremely well read, and eager to be considered brainy.

From an early age I was surrounded by music – first I was a violinist and pianist, and then, when the embarrassment of the tatty old violin case became too much to endure, I started singing in bands – I sang in pubs when I was 17 and my Dad used to come and watch, wearing his denim safari suit. So when the Wide Mouthed Frogs took form, I was deeply jealous – I had only had the experience of singing with all-male outfits, apart from with Katie Brockie (who was to be a Frog) in the dubiously named Saxon Hair ... and despite the experiences being incredibly enjoyable and rewarding, here were my best friends! Forming a band! And I wasn’t in it! But they already had a singer. And what a singer … Jenny [Morris] already had a commanding, sexy presence and her voice, well, it kind of warmed you through and lulled you, then effortlessly flitted off to a belt that would flatten your ears. Phenomenal. They (The Frogs) were a fresh burst of optimistic, sparkly girl pop with boots on – I fondly remember Sally’s falling-off-a-log drum fill on Blondie’s ‘X Offender’ and Tina’s laidback cool with her bass slung casually across her small frame. The band was extraordinary – not just for the time, but hey? Who else had male backing vocalists dressed in plastic rubbish bags?

I was lucky enough to step in on occasion – and for some reason my memories are of sartorial disasters. Once I joined them for a spot on RTR singing ‘The Loco-motion’ and someone rather shorter than me lent me a pair of tights that came about halfway up my thighs so I sort of had to shuffle through newly learned dance moves while attempting to bluff my way through a song I barely knew. How I would love to see that now. Mouthing like a guppy. Another time, was the notorious Opera House gig with Rough Justice and Th’ Dudes, who famously refused to play because of the inferior sound quality. Oh, how I loathed those smart-arsed pretty boys and their up-their-own-bum arrogance. So much so that I hooked up with one, and then made music with him for the next twenty years. And the sartorial disaster of that gig only became clear to me many years later when I saw a photo of a belted long black T-shirt I had painstakingly sewn gold braid on … and just how diabolical it looked.

The Frogs had fun. You could tell. You wanted some. I had some. And so did everyone else who witnessed the brief but entertaining incarnation that was the Wide Mouthed Frogs.