“I’ve learned more about New Zealand in one night than I knew in a lifetime.”

So said Australian George Papanicolaou after attending the 4th Annual Kiwi Night in early December. George is one of the increasing number of Australians who are turning up to the gathering which began on the night the Springboks landed in New Zealand in 1981 and has since become an in­stitution.

That first evening was held at the notorious Bondi Astra but since then the event has moved uptown. The sec­ond was held at the Graphic Arts club, the third at the Tivoli in George Street and the latest at the upmarket New Chevron in Potts Point. 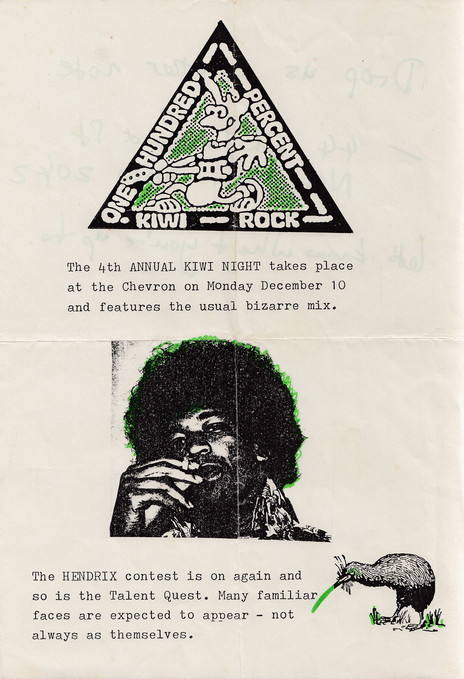 Events which bring Australians face to face with New Zealand culture are few. The Polynesian Festival is held each year around Easter; there is an annual Kiwi picnic plus occasional events like the recent season of New Zealand plays at the Stables Theatre.

But it’s safe to say none of these are quite like a night which puts up to 30 acts on stage in one night and which has only one written rule: No one is allowed to sing ‘Ten Guitars’.

There is a minimum of advertising for the event. Its semi-legendary status ensures a full house based on word-of-mouth. For many it’s a reun­ion and touches of homesickness are apparent. It’s not just the Tourist and Publicity posters around the wall or the Kiwi videos showing in the piano bar.

Partly it’s the Steinlagers, put on especially for the occasion. For un­wary Australians, too, these can prove to be a formidable hit. It might also be the Pinky Bars, Chocolate Fish and Whittakers Peanut Slabs, which are given away as prizes throughout the evening.

There are rock bands but there are also dance groups, solo performers, jugglers and comedians. Rarely is a group given more than three songs; there are dozens more performers wait­ing backstage for their turn.

At the Chevron the audience istreated to a modern dance group – Chris Jannides’ Darc Swan – combin­ing with some others to form the Ngati Pakeha Me Nga Rua Maori group. Their performance wins them the trophy for the most popular group. 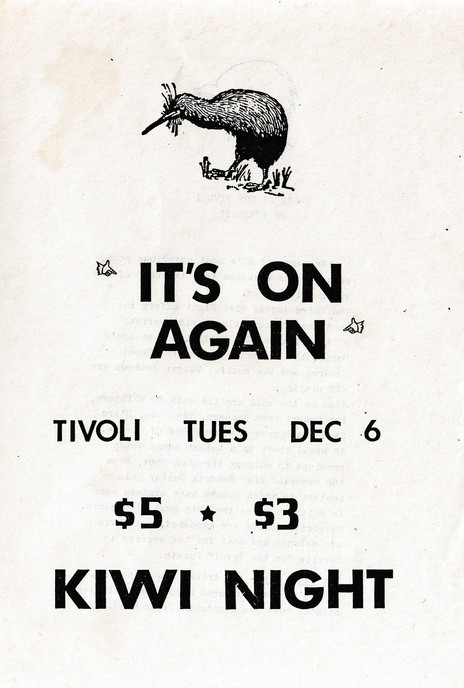 Four women, pregnant and dressed in full bridal outfits, sing the old stan­dard ‘Going to the Chapel’. It sounds cheap but when they are ex-members of the famous Wide-Mouthed Frogs and when lead singer Katie is genuinely very pregnant then it works and wins them a special judge’s prize.

Nobody takes sides. A very gay quartet sing a song called ‘Bachelor’s All’, each brandishing a burnt sausage on a stick.

An ex-barman from Tokoroa gets up in the Talent Quest and tells a long unfunny joke. He fares better than some of the other talent quest entrants who get howled off the stage.

Every Kiwi Night features guest Australian performers. Last year it was a comedy group, Funny Stories, who re-enacted the ASIO break-in of the Sheraton Hotel. 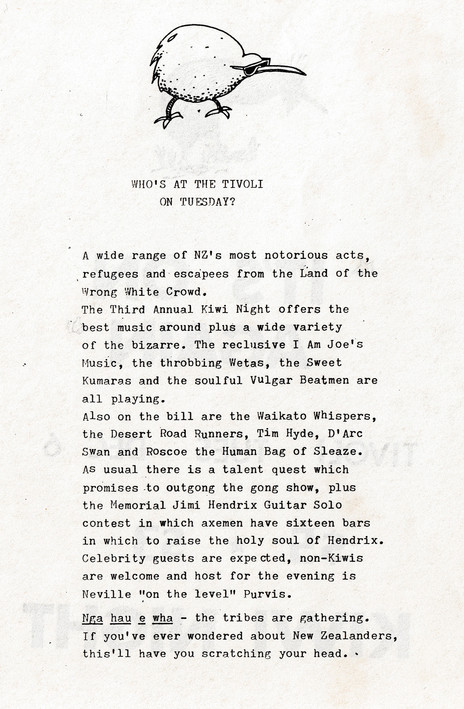 But they miscalculate when they bring out a life-size latex doll of the kind bought in sex shops. It gets a laugh but when they persist with it some of the women in the audience start screaming at them to get off stage. They protest that they, are, for the night, official honorary Kiwis, The women reply with a hail of beer cans.

Ex-Dragon guitarist Robert Taylor celebrates leaving the group by per­forming a couple of solo bottleneck blues songs; something he hasn’t done since he used to sing as a teenager in Wellington’s Chez Paree.

There are other surprises. Brent Eccles from the Angels gets up behind the drumkit and backs none other than Max Cryer.

The band performing under the name of the Curtain-Raisers turns out to be Mi-Sex. They have the audience shaking the dance floor with, among other numbers, ‘Dock of the Bay’.

The Jimi Hendrix Memorial Guitar Solo contest is held for the last time. Three years ago Sydney papers, in­cluding the Herald, ran stories about how rock scholars had just discovered that Hendrix had a grandfather who was a singer in a Maori showband (who happened to be in New Orleans in 1929 and met up with Jimi’s mater­nal grandmother Ella-Mae Marshall etc.) Some Australians now believe Hendrix was part-Maori. 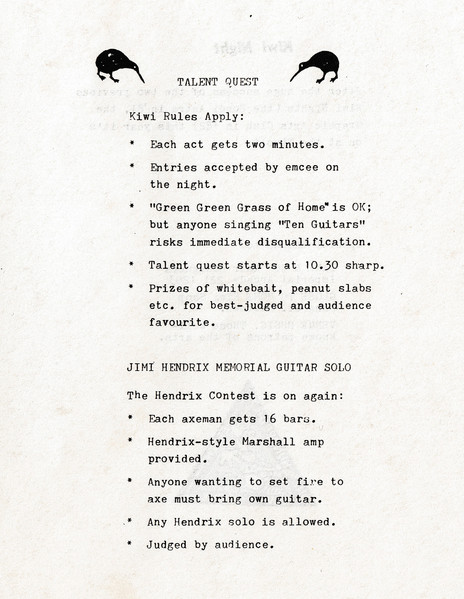 This was reinforced by last year’s Hendrix winner, Paul Maake, from Hastings, who not only played like him but bore an uncanny physical re­semblance. This year Maake opened the night playing ‘God Defend New Zealand’ with his group Long White Cloud. The contest was won by a member of Icehouse but organisers have decided that enough is enough and Jimi is being given a rest.

A 30s swing group lead by Fane Flaws do a short set and so do a group of musicians from the Sydney Conservatorium of Music. The crowd by this time are so hopped up on whitebait, Steinlager and suchlike that even a mention of “Gisborne” or “Ngauruhoe” or “Christchurch” is met with resounding cheers.

The Australians’ perplexed attitude changes to complete mystification as the hall joins in en masse to sing the unofficial national anthem – the Chesdale Cheese Song.

Sustained applause greets the award of a special Golden Football Boot trophy to “the New Zealander who has done most to promote the image of New Zealand overseas in 1984”. The winner is Prime Minister David Lange and for this one even the Australians join in.

A formidable rock line-up consist­ing of DD Smash and friends finish the night off playing under the name of the All Blacks. Onstage with Dave Dobbyn at the end are Jenny Morris, Steve Gilpin, Paul Maake, Ricky May, Johnno and Danno, members of the Drop Bears and many others.

Someone is holding up a huge lyric sheet so the audience can join in the song as well. The final number – ex­cept for the middle section which Ricky May turns into ‘Hoki Mai’ – is ‘Ten Guitars’.

It’s after two to the morning but George the Greek-Australian is hang­ing around the backstage area. He thanks some of the performers and wonders if by any chance anyone has got any of this Chesdale Cheese?

This article first appeared in New Outlook, March/April 1985, and is republished with permission.