Beneath the imposing portals of a wharenui, an elder from the Ngāti Porou tribe welcomes a group of visitors from Auckland to the Mangahanea marae in Ruatoria.

Receiving the pōwhiri are Herbs, plus an entourage of family, roadcrew, filmmakers and journalists. They have come to spend Queen’s Birthday weekend at the township, 130km north of Gisborne, to launch the band’s first album in two-and-a-half years, Sensitive to a Smile. 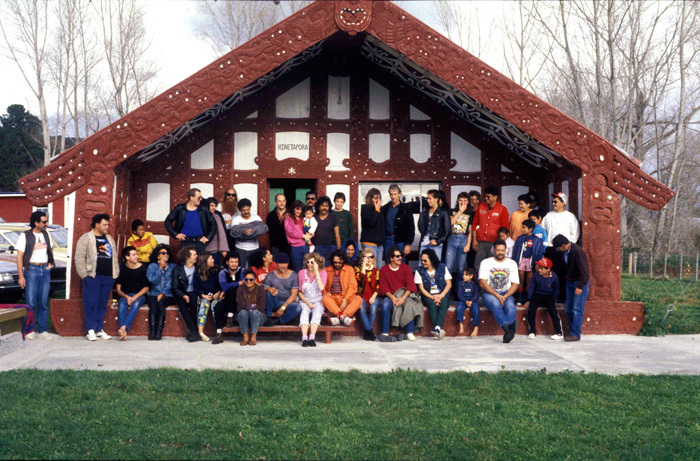 Herbs and the other visitors to Ruatoria, 1987, Dilworth Karaka sitting at right in white t-shirt. - Photo: Murray Cammick

Ruatoria has received a lot of negative publicity after 30 fires in the past two years: arson and angst between Rastas and locals. But after an arduous eight-hour drive from Auckland, winding round the misty East Cape road, the skies are clear over the town, and all the visitors can sense is a relaxing tranquility and the spirituality of generations.

After three stirring mihi in Māori, the visitors from the city reply in their own way. Lacking a fluent Māori speaker, Herbs stand and sing the traditional ‘E Papa,’ then ‘Long Ago’ and, incongruously, ‘Reggae Train’. But the message gets across. The weekend is all about communication, giving and receiving. Herbs aren’t in Ruatoria to solve the town’s problems, but to contribute some goodwill to get people talking. And the community shares the richness of its traditional ways and values with the band and its entourage.

Looking down on the band are portraits of Sir Āpirana Ngata and Ngārimu, VC.

After dinner on the marae, the first concert of the weekend takes place at the Uepohatu hall. It’s the whānau concert: family night. Three hundred children, parents and grandparents fill the magnificently carved hall to hear Herbs unveil the songs of their new album and some old favourites. Looking down on the band are portraits of the town’s most loved sons, statesman Sir Āpirana Ngata and soldier Ngārimu, VC.

Every member of Herbs sings a lead vocal through the evening, along with their inimitable Pacific harmonies, but the show is led by the ebullient Willie Hona. When the power fails, he finally satisfies the kids sitting at his feet: they’ve been demanding the Kentucky Fried Chicken ad all night. After the unfamiliar new songs, the hall really bops when the hits start coming: ‘Long Ago’ and “the song about a dog.” The kids shy away from singing along to ‘Slice of Heaven’.

Next morning begins with more speeches on the marae, then it’s down the road to Ngata College for some workshops with the band. Maybe the town is too busy preparing for the day’s big rugby match – East Coast versus old rivals Poverty Bay – because few are present to hear the band discuss their musical roots.

Willie Hona, “the Cowboy”, goes back to playing with Mark Williams in Dargaville in the early 70s. Samoan drummer Fred Faleauto, “the Phantom”, is now the only non-Māori in the band; he spent his youth playing in multicultural bands in the Islands. Charlie Tumahai’s illustrious career is well known: from cabaret beginnings to bassist for Be Bop Deluxe. “Joining Herbs was an eye-opener for me,” he says. “I have learnt more things in the past 18 months that have been beneficial to me as a person and musician than in the 17 years away.”

Hugh Lynn, Herbs’ manager and leader of the Warrior Records’ whānau, talks of tapping musical talent as a resource for Māori. “Why are our people so successful at music, but not at the European way, with no control over music or management?” Warrior is one response, another is Whare Tapere, a Fame-type school currently being developed to train young Māori in the entertainment business.

The town is bustling in the afternoon for the rugby, but after holding Poverty Bay at 0-0 through the match, the local side succumbs in the closing minutes to two penalties and a converted try.

But the evening’s concert more than makes up for it. Once again at the Uepohatu hall – opposite which, a new fire station is being built – this time it’s a cultural evening for Herbs, with the band giving a short set to launch their album. 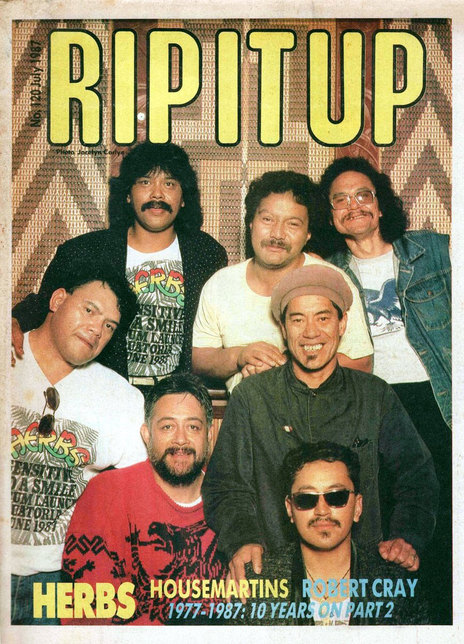 Herbs sit as guests of honour while two local cultural groups – Ai-tanga-A-Hauiti from Tolaga Bay and Hokowhitu-A-Tū from Tokomaru Bay – perform traditional songs and poi dances. No one could fail to be moved by the rich choral harmonies. Some of the melodies sneak up with a familiarity, too: goosebumps rise to ‘Smoke Gets in Your Eyes’ and ‘Born Free’, translated into Māori to encourage use of the language.

A local comedian has the overflowing audience in fits with a routine that would put Billy T in his place, and Herbs respond with a musical bracket and a presentation: the first pressed copy of Sensitive to a Smile, and a paddle from the Hawaiiki canoe that sailed in 1986 from Tahiti to New Zealand, landing near the East Cape.

The most powerful moment though is when all the local men in the hall, including one of the estranged Rastas, spontaneously come forward from their seats to give a stirring haka that none of those present will forget.

Then it’s back to the marae, where Willie Hona and keyboardist Tama Lundon lead the singalong – classics from Sam Cooke, the Drifters, and the Jimmy Cliff favourites ‘The Harder They Come’ and ‘Johnny Too Bad’. It’s 3am before the Herbs entourage beds down in the meeting house.

Sunday dawns to the sound of a helicopter, flying in to film aerial shots of Ruatoria for a documentary on the album launch. At the final concert that night, several Rastas come out of seclusion to attend, and they come back to the marae afterwards for more songs and stories till the early hours.

On Monday morning the poroporoaki (farewell) takes place on the marae. Both hosts and visitors speak: a local Rasta is chosen as one of the marae’s four speakers, and TVNZ’s Robin Kora articulates the feelings of the Herbs contingent. As the visitors head home, there’s no doubt everybody feels enriched by their Ruatorian experience.

First published as “He Rata Kouru Nui: The Mighty Rata Grows”, Rip It Up, July 1987