For musicians, playing the Gluepot meant you'd made the grade. When you actually live in pubs for a period of years, moving every couple of days, with the occasional respite of a fortnight in one place, the phrase "a really good pub" has a resonance it cannot have for those of you who live in bungalows, baches or bijou maisonettes. 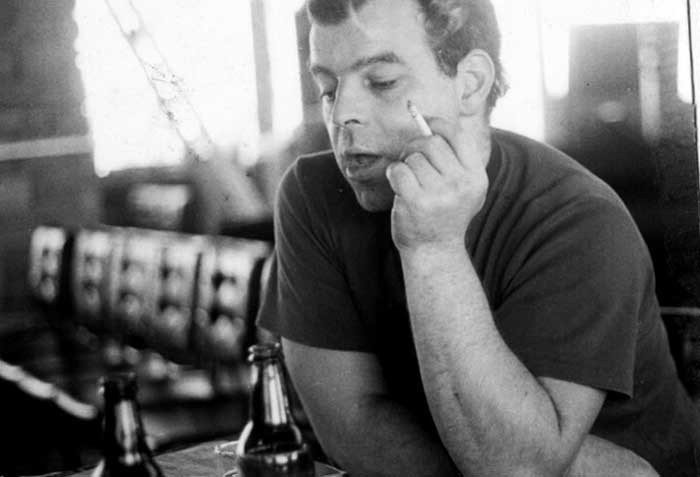 Rick at The Gluepot - Photo by Murray Cammick

Auckland's Gluepot was the home port, the modest pot of gold at the end of the not-always golden circuit.

From 1972 till 1985 I played in a succession of touring bands that rattled up and down the country in a small museum's worth of picturesque historical vehicles. For most of that time Auckland's Gluepot was the home port, the modest pot of gold at the end of the not-always golden circuit. This applied even though, ostensibly, I still lived in Wellington.

In those days, playing the Gluepot was the musician's equivalent of a footballer's playing rugby at Eden Park. It meant having made the grade. It had a special atmosphere. And, if you have played there a lot, you can't help but feel you belong to a tradition.

When I was first told that the Gluepot was doomed, I determined not to get bootlessly sentimental. John Dix blurted out the news with that glare of glee he saves for really exciting moments, such as losing the typescript of Stranded in Paradise again. The average worker often gets attached to a favourite workplace. I've worked at the Gluepot for 17 years and three relationships. And it has always been my favourite gig. So I feel less than ecstatic that it's going.

Les Wilson was the main reason the Gluepot was special. He was one of the few gentlemen publicans at a time when many were quarrelsome, self-opinionated, authoritarian drunks – and that was the bearable ones. In the deep south and on the West Coast, though, the publicans were usually hospitable or better. Les had been a musician himself, as had his music manager, Eddie Cook, and this made for an almost unique working situation. The management genuinely appreciated good music and, if they felt you had played well, you found a couple of slabs of Fosters in your dressing room at the end of the night.

Another larger-than-life personality was Phyllis, who took the door. She and I got on very well. Not everyone earned her regard, however, and one frequent performer said it exactly: "If she doesn't like you, you're f—ed." Les ran a very tight ship, with unusually low staff turnover – a good indication that the staff were happy. But he could be tough. Once I had to order a musician to apologise to the publican. It was the first and only time. 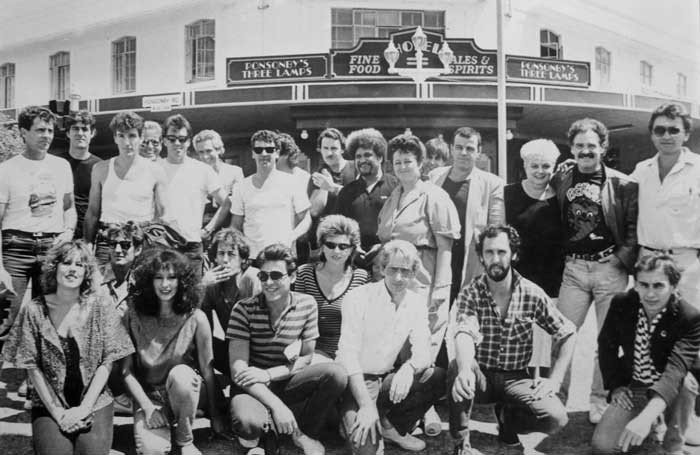 The family at The Gluepot in 1979. Rick Bryant is in the back row next to the daunting Phyllis and booker Eddie Cook.

The upstairs bar in those days was spotless, with Kelliher Art Competition reproductions tastefully spaced around its noble proportions. The stage, though of modest size, had been constructed of the finest New Zealand particle board, incorporating the latest in beer-crate technology, and the whole had been lavishly finished with polyurethane and the best brewery carpet. This stage was Les' focus and particular jewel. Even the most intellectually challenged drummers – and there were several about – knew that you didn't put nails into Les Wilson's stage. On the fateful day, Les was showing a couple of brewery bigwigs his precious, spotless bar – indisputably New Zealand's premier rock venue. We were setting up, and our drummer, with the insouciance of Richard Loe absentmindedly tripping over a carelessly placed Carozza, commenced to drive nails into the floor. Imagine, if you will, the reaction of the late Sir Robert Muldoon, discovering a communist lesbian anti-tour demonstrator in his lily house with a flagon of paraquat, and you will begin to appreciate the occasion ...

When Les regained the use of his voice, it was not noticeably raised, but his sentiments were of an earthiness best described as military. Only his duty as host to the suits ended a painful scene.

The best memories form a blurred continuum: from 1977 with Wellington-based Rough Justice, through 1980 with The Top Scientists. '81-83 with The Neighbours, and '83-88 with The Jive Bombers, there were too many nights to particularise. It was the present, and there was no time like the future then. We filled the room on our first-ever outing with the Bombers – and that on a Monday and Tuesday. Briefly holding the room record later was an even bigger buzz. But I can't recall ever feeling that I had sung as well as I could (which is the real buzz), because I didn't beat the baccy till 86.

The Gluepot upstairs bar started to run down gradually in 1984 when Les finished up, but it was still the venue for many a good show, even in decline, and I expect it will finish on a high note this week when Wayne Toups returns.

Mick Jagger got a fridge put into the dressing room. That seemed an excellent amenity at first, but it turned out to be the fastest way yet to lose your Elephant beer or Tattinger while singing. The dressing room stayed graffiti-free for a while after Les left, but when it appeared the graffiti was as sexist, racist and witless as it always is at rock venues, composed as it usually is by roadies.

Many Aucklanders spent many hours enjoying music in the Gluepot. I was usually playing somewhere else, so I didn't hear as much as I'd have liked to. Dave Dobbyn, Hammond Gamble. Midge Marsden, Annie Crummer, Betty Monga and quite a few others would be central to many punter's memories, and Hello Sailor – still a world-class act when I saw them at last year's Mountain Rock III – did some outstanding shows there, as well as some they'd like to forget.

I went to see Six Volts there once. Mindful of their cerebral dimension, I prepared – for once –  a state of mind suitable for an NME journalist. The floor had never sloped 15 degrees from the top of the stairs to the very distant stage before, nor had the carpet undulated friskily in vibrant gamboge glory. G&Ts disappeared like water, which is what they tasted like. The band was great, of course. 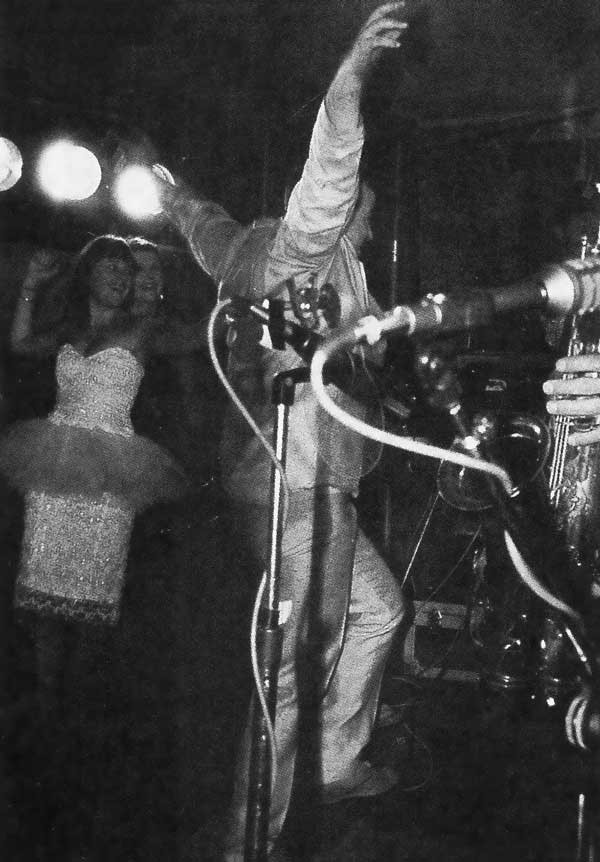 Rick with The Jive Bombers at The Gluepot, 1983 - Rick Bryant collection

Among the other really good local performers I heard there for the first or only time were Josie Rika and Leo de Castro, both huge talents denied careers to equal their gifts, and The Mighty Asterix, who has still got a chance I guess, and John Kempt's Scissormen.

I've been at the pub for one of those shambolic everybody-sings-the-blues-except-the-promoter gigs, and for solo shows by performers such as Sam Hunt, who had 600 or so people spellbound by the spoken word. But it was the now-ubiquitous Gary McCormick, incarnated at the time as poet/ raconteur, who really made my hair stand on end one night with a sudden change into surreal overdrive. He was about 20 minutes into his set. and it had been going well, when the muse must have alighted invisibly on his shoulder, because his performance went quite abruptly from better-than-average to inspired. I didn't mind even when he maligned pot-smokers as verbally challenged bores. My ribs hurt for several days afterwards from laughter, but he delivered something extra along with the jokes that I still find hard to nail with a word. Maybe you could call it "attitude". It's like a special kind of adrenalin you catch off the crowd when everything is going perfectly. The performer's increased energy goes back out to the audience, and the circuit is closed, like electricity. I've felt it, but I've never seen it happen as vividly as it did that night.

I hate having to fire musicians, although a couple of times it has been unalloyed bliss.

I hate having to fire musicians, although a couple of times it has been unalloyed bliss. The first time was the hardest. In my first working band, the guitarist insisted that the bass player be replaced. "You're the leader. You do it." The bass player was thought to be popular with the females, although I never saw it proved, but after three drinks he couldn't count the frets and after four he couldn't find the strings. Anyway, the deed was done with a shudder and I tried to get on with my life.

Twenty years later this rooster surfaced again as a senior breweries executive. His career has since taken him offshore, although the last time I spoke to him I found his business logic, well, bewildering.

"We're going to put mainly overseas bands upstairs from now on" he told me. "Bands like you will be going downstairs, on wages."

Talk about an offer you can't understand. This was tantamount to a 200 or 300 percent pay cut after seven years' good work filling their bar and selling heaps of their beer.

As it happened, we went on playing upstairs for quite a few years, but eventually the pub's odd practice of competing with itself, with no cover charge downstairs and quite fierce ones upstairs, confused the punters into submission.

About the time that Michael Woodham – the current and final manager – arrived, things took a marked turn for the better. Having negotiated a less impertinent wage deal, we started playing downstairs for guarantees instead of paying room hire upstairs. It's not like the heyday upstairs, but it's still a gig.

Walking into work there last Friday, I noticed people gathering signatures for a Save the Gluepot petition. My angry first reaction came back. Only four or five people in the world really seriously want Auckland's best pub closed, whereas there are thousands who want it saved. It's just that the four or five own it. Their selfishness is truly impressive. There are thousands of yuppie shops in Auckland. Why bowl the best pub in town to build half a dozen more?

This appeared in the New Zealand Listener of 22 October, 1994.