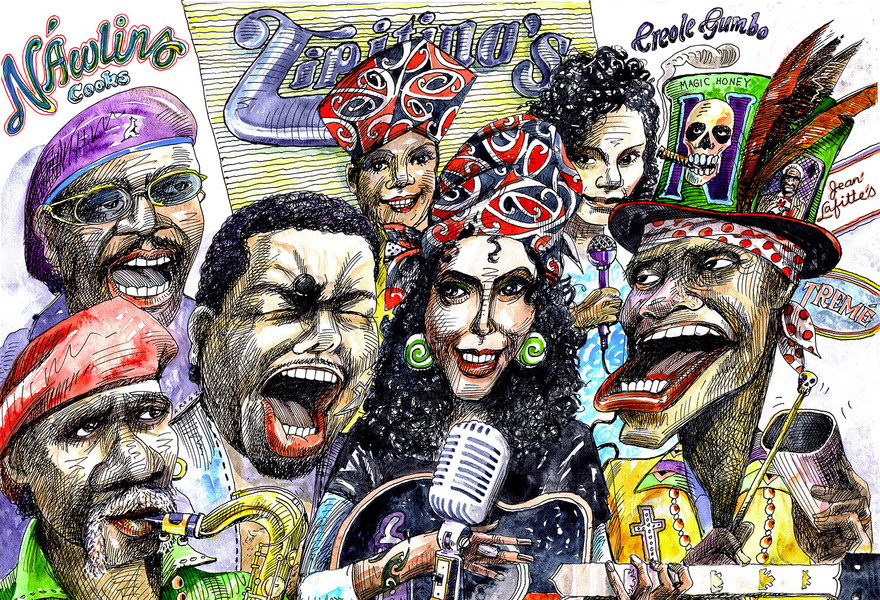 Moana & the Moahunters and the Neville Brothers

When the Dave Brubeck Quartet first visited Wellington in 1960, riding high on ‘Take Five’, they were greeted by a pōwhiri and a blues. The Te Pataka Concert Party performed the pōwhiri, and a local jazz combo the blues. Brubeck’s antennae heard a 6/4 rhythm in the pōwhiri and created a piece called ‘Māori Blues’ for the quartet’s next album.

Thirty years later another musical fusion took place, but it had a lot more spiritual and emotional depth. The Neville Brothers were at a low ebb when they arrived at Auckland Airport in October 1991. The New Orleans funk veterans’ first visit to New Zealand came after a long world tour in the wake of their breakthrough album, Yellow Moon.

They were exhausted, none more so than Aaron Neville, the imposing giant with the voice of an angel. A sciatic nerve meant that this monument of melisma could barely walk, and he spent much of his time in Auckland in a wheelchair.

Moana and the Moahunters were the Nevilles’ support act, and they gave the group not just a pōwhiri, but an embrace of hospitality and friendship. “I felt like I’d been there before,” Aaron said later of the welcome. “I didn’t have any idea of what they were going to do. I felt safe. It was cool.” His suave brother Charles agreed: “Everybody was just overwhelmed; it was like we were being welcomed home.”

When the time came for the Nevilles to leave, the farewell party was emotional: Charles mingling with kuia, Cyril – the activist brother – with Greenpeace. Aaron held court from his chair, and Art (“Papa Funk”) sang ‘Rip It Up’ to Murray Cammick, for he had played on the Little Richard session.

Six months later the Nevilles returned the gesture, inviting the Moahunters to perform at the New Orleans Jazz & Heritage festival. At the Louis Armstrong International Airport, the Moahunters arrived to a funky fanfare from the Soul Rebels brass band. Then a Southern welcome was held on the Nevilles’ home turf: Tipitina’s, their local club just a few blocks from the Mississippi.

That it was also a record launch was lost in the rituals of welcome and bonds of friendship. The Nevilles’ new album was aptly named Family Groove. The last track confirmed that something special had taken place back in Auckland. It was a field recording of the Moahunters and their whānau singing ‘Whakaaria Mai’ to the Nevilles at Ngā Whare Waatea in Mangere. Halfway through, it segues into Aaron’s warble, and the brothers join in with their harmonies to ‘How Great Thou Art’.

In New Orleans, the Moahunters learnt some things: how much pride a community can take in its own music, the benefits that result, and that their funk was unique. Tāmaki Makaurau funk.

This is the ninth of a bi-weekly series about unlikely encounters experienced by New Zealand musicians. Read more about Chris Grosz, musician and illustrator.