From my first hearing of Delaney Davidson’s unmistakable gritty whine, I was hooked. He kneads and stretches his words like a gum-chewin’, part-preacher part-devil, in a sort of gothic-gospel-grunge. His videos match his retro sensibility (nowhere more than here), he’s Tom Waits via Lyttelton, and despite the Americana-vibe, he’s unmistakably ours. I find ‘I Slept Late’ irresistible. It’s a hooky toe-tapper, wilful in its refusal to be musically classified, and first and foremost a vehicle for Delaney’s glorious baritone, right in your ear. Listen to his insinuating “Mmm” at 0:50 above the “oom-chucka” rhythm on guitar, and its subsequent brief multi-tracking, subtle but effective. The song ramps up, until the horn section takes over in joyful anarchy with DD as sinister Pied Piper leading the kid-band through the cemetery. You could imagine yourself reaching for a German beer amongst all that oom-pahhing. I gave Delaney a blues song of mine to record and he knocked the bastard off with a swirling, echoey take of its simple progression, the spoken part subverted into fugitive musical whispers. He’s one of our best.

Alex Taylor – Lay Me Down

I find Alex Taylor’s vulnerable, keening voice with its plaintive falsetto unutterably moving here. Composer, poet, singer and multi-instrumentalist, he brings his refined sensibilities to this sweet song, also known as ‘Digging Days’. Some of the lyrics once belonged to real New Zealand folk songs which are now lost. They tell of New Zealand’s 19th century history, a meditation on the scars left by colonisation, both environmental and human (as Alex puts it). His commitment shines through; the music brings tears. Taylor was my student, then colleague, and I’ve always admired his deep creativity, searching mind, and taste for subversion. These qualities can manifest in soaring orchestral works, list poems, and the man can don a frock and camp it up. His performance as Sorceress in his and Frances Moore’s Dido and Aeneas: Recomposed was unforgettable. Strapless red bodice, witchy black skirt, and Chuck Taylors, he bewitched full houses. Alex is doing doctoral study at university in San Diego along with another ex-student of mine, Celeste Oram, whose ethereal backing vocals can be heard on the song. I’m so very proud of them both.

My first experience of the vibrant Janet Roddick, was in the Brainchilds at the first Composing Women’s Festival, 1993, including David Donaldson, Tim Robinson and Steve Roche, one of the many iterations of this talented, expanding and contracting bunch of Wellington musos who’ve since emerged as Plan 9. I loved how dynamic and fearless a performer she was, with considerable (and operatically-trained) vocal skills, playing keyboard, trombone and, well anything, with equal flair. Here’s a classic from Six Volts, with bird-woman Janet taking centre stage. Starting in dark mezzo tessitura, she skilfully colours the melody as it progresses – to wit, the ascending ululation on Glover’s Quardle oodle ardle at 0:18 and inflections on (Tom’s) hand at 0:27. From 0:42 she launches into her upper register in a yodel-fest, and the boys’ continuously inventive accompaniment pervades, with an irreverent spirit. Listen from 1:30 when they take off in an extended instrumental. Janet’s avian vocalisation with the band provides a wacky, nudgy soundtrack. Bask in 3:48 to 6:00 when Janet picks up trombone, there are serious chops all round. Smashing.

Here’s a gem. Auckland composer and child psychiatrist Louise Webster brings her all to this anonymous 18th century tale of an abandoned young woman, in a deftly written score for plangent mezzo, oboe, bass clarinet, cello and piano. From the a cappella opening, she captures the heartache of the repeated O Donal Oge, with a rising octave and falling major 7th, supplication and anguish in three notes. Singer Jennifer Maybee utilises the hushed intensity of her low register, and the line ranges freely over one-and-a-half octaves, dipping and soaring. There’s bewitching sprechstimme, seductive lyrical lines, and ironic waltzes, all shot through with a bleak desolation, as the composer puts it. This can be heard most effectively in the final section, where Louise focuses the voice, and draws her forces in, for the last, devastating stanza.

Darryn Harkness – Change of an Astronaut

I can’t resist the hokey vibe of this trippy punk pop, sci-fi lo-fi number.  One’s eye rarely strays from the histrionics of frontman Darryn Harkness, who has a touch of the Basil Fawltys at his most manic. The song’s high-octane urgency and boomy acoustic are hilariously in keeping with its found or makeshift sets, and the relentless guitar strum cleverly makes way for a more metallic, synthesised soundworld for the outdoor, Kubrickian foray.

I knew Darryn as a From Scratch player too – that level of percussive performance takes musical discipline to another level – and invited him to sing in my opera on Len Lye in 2012. He stole the brief scene as a walk-on, steel-string strumming busker, chewing the scenery for a bit, and loping off. Wonderful stuff.

Jewish New Yorker Jonathan Besser is unique in the Aotearoa scene, a composer and pianist with a soulful, klezmer-infused style and ability to swerve from experimental fare with fiddler Chris Prosser, to orchestral music, and ear-catching songs written for singers as diverse as Mere Boynton, Jackie Clarke, and here, the late theatrical supremo Warwick Broadhead. I was captured by the exuberance in this rollicking G major ditty, written for a bunch of seasoned Besser collaborators, including Miranda Adams violin, Nigel Gavin banjo, and Peter Scott on bass. Right from the off, Gavin’s banjo is frantically a-pluck, and Nannette Fortier is kept busy on drums. Apparently, this Las Vegas native was in town and offered to step in for the gig. Bridget Miles’s clarinet swoops around the vocal line as Broadhead‘s stentorian delivery takes flight. You can smell the salt, as this shantyman hurls Captain Haddockesque commands, Sail, you landlubbers, sail! and the band runs amok. What a brilliant choice Broadhead was for this track, his eccentric delivery and shaky plunges down to the low E heightening the sense of joyous abandon that Jonathan has created.

This was the work which initially turned me on to the miraculous, fey sensibility that is Annea’s. Take all the preconceived notions of the piano as a costly, revered instrument of high Western classical music, and release them in a flicker of flames with an extended ritual which evokes the elemental. There’s a 60s vibe when experienced now, but I think ‘Piano Burning’ is conceptually timeless, and there are layered resonances today. Standing or sitting around the warmth of the fire allows us to listen slowly, and deeply to its sounds, as the strings snap and the frame crackles. This performance is in daylight, so lacks some of the focused drama of a nocturnal conflagration, such as I witnessed in Sydney a few years ago, but sets it in context with the composer present. Hear Annea talking from 03:00, feel her generosity of spirit, sense the determination in her steely eyes. This resolute woman has lived in New York for years, but is indomitably, irrefutably from here. Blazing trails for composers and sound artists, especially women, for over 50 years, Annea is a precious one.

I’ve always seen Phil Dadson as one of the great artists of the Pacific Rim. A master of all trades – sound, performance, video, photography, instrument-making, intermedia, you name it, he’s always got something on the boil. Brass players in hot air balloons? Tick. Foley-trays of gravel to trample? Tissue paper juggling? Done. Phil seems to hear more closely, dig more deeply, he’s at once workaday shed-tinkerer and visionary. With his acclaimed group From Scratch, he’s galvanised a moveable membership of our most adventurous percussionists from 1974 onward, and last year’s FS retrospective at Te Uru was a fine survey show for this group which has rallied composers, improvisers, artists, filmmakers, jazzers, teachers and more with its exuberant, collectivist spirit. This classic 1984 Drum/Sing masterwork was the first From Scratch performance I experienced live. I can still recall the freshness of that mesmerising and immersive ritual – it was done at Victoria University and my position on a raised bleacher afforded a perfect view of the three protagonists, Dadson, Wayne Laird and Don McGlashan, working in choreographed, chanting, thrumming and hocketing perfection.

Claire Cowan has a magic touch with the theatrical and can conjure a specific sonic mood, from quirky to grandiose, depending on the gig. Concert platform, TV jingle, film, or theatre, she’s your woman. I remember as a student, she offered kooky numbers like ‘Bus Stop’, in which six musos sat deadpan, tightly percussing. In ‘Subtle Dances’, her commission for the Aotearoa music-loving NZ Trio, Claire’s natural musicality is immediately present, in a set of beguiling movements for violin, cello and piano. The first movement is utterly seductive, Claire deploying the considerable talents of cellist Ashley Brown, whose pizzicato glissandi and twangs captivate. The ensuing tangoesque trio with sighing violin and darting piano is a sheer delight. Our cultural life here would be poorer without Claire’s Blackbird Ensemble, who keep us on our toes with visually and sonically arresting shows. It’s hard to choose my favourite, is it Night Sky or Björk: All is Full of Love? Watch the Blackbird space, all. Claire has imagination to burn and I admire her enormously.

Gillian is a taonga and her music speaks from, and of, Aotearoa. Some of her utterances can lift me to other realms, nowhere more so than in this supple and surging piano solo. Its journey through time evokes the ebb and flow of the tide over Otago mudflats across the road from where she lived, and the unique ringing call of the korimako. Its restless harmonies are often anchored in the bass by steadfast fifths. But there’s a pervading menace below the surface. Flounder lurk, undercurrents ripple and eddy, and those powerful parallel progressions, a Whitehead hallmark, provide rhythmic stability amongst the turbulence. The music pulls you forward in waves, rising and falling, culminating in a magnificent fortissimo iteration of the work’s original korimako call. Gillian is never in a hurry, the pacing is of the land, sea and birds. She’s a visionary. 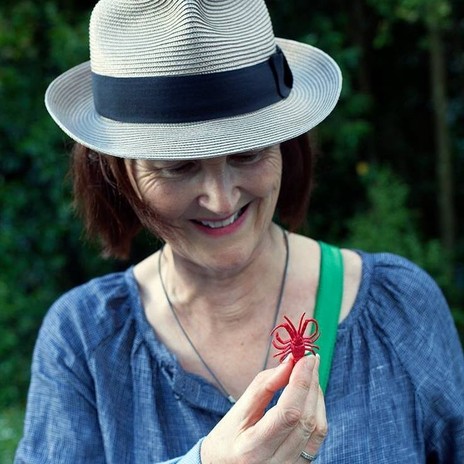 Eve de Castro-Robinson is one of New Zealand’s foremost composers, whose works are performed widely internationally. She is twice winner of both the Sounz Contemporary Award, and the Philip Neill Memorial Prize. She has been commissioned and performed by many leading performers including all New Zealand orchestras, NZSQ, NZTrio, BBC Scottish Symphony Orchestra, Nash Ensemble of London, the Dutch HEX, Alexander Ivashkin and Jane Manning. She has three solo CDs on the Atoll label, and two on Rattle including The Gristle of Knuckles which won her Best Classical Artist at 2018 Vodafone Music Awards, and single works on many other recordings. Many pieces by Eve can be heard at her profile page on the Sounz website. Photo by Harvey Benge, 1944-2019