In the late 1950s the suburbs leading out of Wellington to the north via State Highway 1 were a mix of gorse and scrub, farmland, a few quickly developed and still bare state house subdivisions, plus baches, seaside housing and ribbon retail.

The very sleepy seaside village of Mana had a hall, a couple of stores, a gas station (or benzene, as people called it then) clustered around a railway station. It also had a rock and band: The Mana Quintet, who played the halls and dances in the Mana, Porirua and Titahi Bay area, where the band lived.

McNaught worked for His Master’s Voice, then by far the biggest name on the recording scene, and in 1958 The Mana Quintet were asked to back Barry Walden’s brother Paul Walden on two singles, ‘Little Fool’ b/w ‘Kewpie Doll’ and ‘Tom Dooley’ b/w ‘Guess Things Happen That Way’, for HMV. Both were substantial local hits and led to an offer the following year to record on their own for HMV.

They dressed the part too – with matching white caps and striped shirts, plus a dynamic live show.

The name was clearly a problem, so the band were renamed as The Supersonics (by promoter  and singer Johnny Cooper) early in 1959 and soon found themselves as headliners in the capital, playing the very popular Wellington Town Hall Rock And Roll Jamborees (organised by Cooper) and backing Johnny Devlin when he hit the city and the Hutt Valley that year. They dressed the part too – with matching white caps and striped shirts, plus a dynamic live show that heavily featured ace guitarist Bob Southee, who was quite the local guitar hero in his day.

The Supersonics were the Wellington finalists in the 1959 Joe Brown Talent Contest. While they didn’t win the final in Christchurch, it led to gigs in the city supporting Max Merritt and his Meteors, the big local stars, before The Supersonics returned north.

In late 1959, Jim McNaught left for a job as a swimwear salesman. He would reappear a few years later as a light country-pop crooner for HMV, with several big hits and a TV presence before his death in 1972.

McNaught’s replacement was Leo Gillingham, who appears on their first single, ‘Walk Don’t Run’ b/w ‘Guitar Boogie’, issued at end of 1959. The song was a Wellington regional hit, followed in 1960 by another, ‘Perfida’ b/w ‘Hard Boiled Boogie’. Despite the success, Gillingham left. He was replaced by Brian Miller, formerly of The Cascados (although there is some suggestion he drummed for both bands for a while). Joey Nicholls also replaced Phil Campbell on guitar around this time.

The next release was as The Tubes, backing the popular and extroverted radio showman Bas Tubert on the perhaps best-forgotten ‘Hu-Hu Bug’, coupled with ‘Waikanae’. The final release was 1961’s cover of The Shadows’ ‘The Frightened City’, which was “over-shadowed” by the original, both on the airwaves and in the stores.

Although still a substantial live draw card in Wellington, they split in late 1961 when their lives took different directions.

Phil Campbell passed away in early 2015. 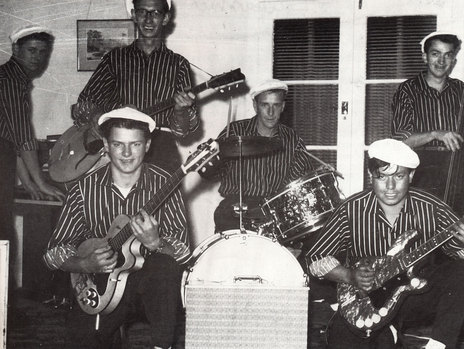 The Supersonics - at the back: Pat Southee, Barry Walden, Jim McNaught, Richard Cooper. In the front: Bob Southee and Phil Campbell. The outfits were a trademark.