AB: How is it being older than Jesus?

LB: It’s awful. Thank you for mentioning it. The hangovers are terrible.

AB: While Give Up Your Dreams was in production you told me, "Future world music I reckon, so like a post-apocalyptic world music sound. Like if you could imagine cyborgs around some eighty-gallon drums, chanting at the remains of the moon." Did this influence make it on to the final record?

LB:  Yes. Have you heard the album? I think ‘Myth’ fits this description very well.

AB: I celebrated the All Blacks winning the World Cup 2015 by seeing you playing live at London’s Oslo. What makes you proud about performing Give Up Your Dreams?

LB: The band is playing better than ever. It’s definitely one of the things I’m most proud about, the fact that we have continued to improve throughout the years. No complacency here! Also, whether it sounds like it or not, it's an album based very much on live band takes.

AB: It was definitely a strong set. Give Up Your Dreams standout 'Bob Lennon, John Dylan' is sensational live. What's the genesis and aim?

LB: The genesis was that before GUYD I made heaps and HEAPS of demos. I was convinced we needed to push on a bit, and one day I was playing them to Sam, who was unconvinced with the likes of ‘Mountain’ and ‘Silent Orb’ at first and so when he heard the demo for ‘BLJD’ he was like "That is undeniably fun!" so we followed the fun. The aim? For it to be awesome.

AB: Tell me about Fandango’s style?

LB: I’ve often thought we’re not really a band that has a very particular our-own-sound. I think our strength is possibly more in our range, like we do quite a lot of different sounding shit. I still see it in a weird way, what we do as pop, but the way The Beatles did pop once they’d sort of stopped touring?

Not that I’m comparing us to The Beatles. I’m just saying, it’s that approach to music, where you’re not sort of hamstrung by your own sense of what you’re doing. There’s no limits, if you wanna put a reggae beat onto a track, fine, why not? I wouldn’t call us a rock band necessarily, even though we occasionally play rock. So I think it’s more of a general ethos. Maybe I am comparing us to The Beatles! I don’t know, man.

AB: From Fandango, my faves include ‘Sideways Glance’ (not just because I have one myself) and ‘Inside Me Dead’, that lovely, ‘All In An Afternoon’ chord progression around 3.43.

LB:  ‘Sideways Glance’ is definitely a live favourite now. At the end of it we get to cut loose. I really like ‘Inside Me Dead’, too. We wanna keep really busy, despite what people might think about musicians [being lazy]. My son and I enjoy watching docos on David Bowie. He would just make an album, tour, come back and make another album, through basically the whole Seventies. That’s the way to do it isn’t it?

AB:  Buffalo’s ‘Flock of Hearts’ is another favourite, with your beautiful chord progression. I like Boy a lot, so there’s that association also, with Boy’s closing credits.

LB: I felt pretty proud of ‘Flock of Hearts’ at the time. I felt very proud of the chord progression on ‘Flock of Hearts’. Probably because I’ve heard it lots, probably because it is a kind of an up-pop number and there’s something about that that I find immediately gratifying and the fastest thing to burn out for me. Whereas some of the more perhaps pretentiousy musicky numbers last a bit longer for me?

AB: I love that line on ‘Blue Summer’, “we could be unemployed together.”

LB: A lifetime ago.

AB: But then resurrected for Eagle vs Shark?

LB: In a way that’s the song that got us signed to Capital Recordings. It was my song that I made by myself, but we called it the Phoenix Foundation. So there you go. Those guys fuckin’ owe me everything, man, the other dudes. 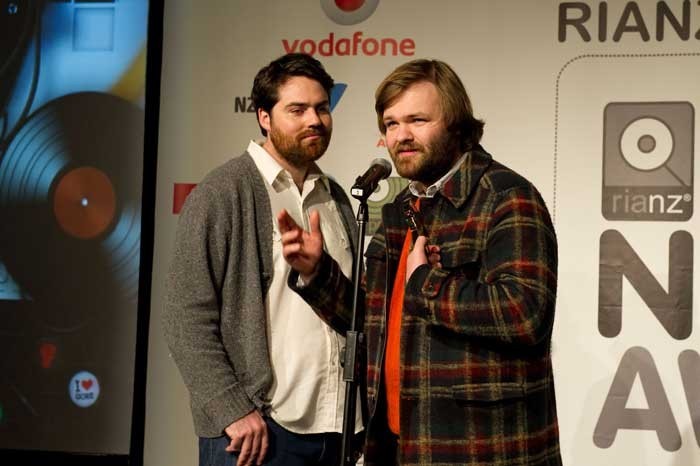 Luke Buda and Samuel Scott accepting their Tui Award for Best Producer on behalf of The Phoenix Foundation, 2010

AB: When I interviewed you about Happy Ending you said the Flaming Lips not holding anything back live had influenced you?

AB: One of you guys’ talents is those sharp lyrics that hook people in. Like on ‘Gandalf’, “she came on like November, pretending to be summer.”

LB: Mostly Sam. With ‘Gandalf’ we got together to write the lyrics and it was a classic Sam and Luke lyric-writing session. He’s got the gift of the gab, that guy, in that way. He’s got a very funny wordplay thing going on. He’s quite good. If you get him drunk and get him in the right mood and get him comfortable enough to be rapping, he can bust out some pretty hilarious abstract rhymes, that’s for sure.

AB: Looking all the way back to debut Horsepower, any tracks you’d choose as particular favourites?

LB: I haven’t listened to Horsepower in ages, but the much-maligned track of Horsepower, I still really like, which was ‘Bruiser’. Strangely it’s a track that polarises people. I remember one of the reviews in the States was, “this album’s alright, until it get to this song, ‘Bruiser’, where it’s amazing.” And the PR company in the States had been trying to get us to take it off the album, and we’re going “nah, fuck you.” It’s not boring. Sometimes I like a really appropriately and beautifully arranged song, and sometimes I like it when people just shit something out and make it insane.

LB: On Pegasus, I really like ‘Hitchcock’, ‘Sea World’, ‘Cars of Eden’, and ‘Twilight’. ‘Slightest Shift in the Weather’ I feel is a track that never fully nailed the vibe. ‘Morning Pages’, the first track, the really quiet one, I think it’s really nice.

AB: Talking to Mike Fab, he was saying, “Wellington markets itself on being the creative capital of New Zealand, but in reality that’s a fantasy. Increasingly there’s no way musicians can afford to practice and record. We might all have to end up in the Hutt.”

LB: He’s totally right. It took Lee Prebble three or four years to find a suitable space that he could afford for his new studio, he had to move out of the Surgery, he’s had to go further out. We recorded Horsepower in there. Trinity Roots, all the Black Seeds albums, heaps of people, he’s been recording in there the whole time. Done a Dave Dobbyn album in the Surgery, for God’s sake [Harmony House]. The Islander, “Welllllcome home.” Dave Dobbyn’s a great dude, by the way. I feel very chuffed to have hung out with him when we did that Flight of the Conchords song. He is a hilarious and entertaining man. If I had a party here, I’d totally invite him. I have parties here all the time, man!

AB: ‘Bitte Bitte’, another one of those sharp Sam Scott lyrics, “What do we do, now that all of the yuppies replaced us?”

LB: “When all of the squats have been turned into gallery spaces.” I think that’s one of his best lyrics. I think what he’s trying to say in that song, I think this because I’ve heard him say this to people in interviews, is that ultimately it’s all right, we’ll just move on to the next spot. Yup, things are just gonna constantly keep changing, and it’s okay, we’ll just go to the next neighbourhood. But it’s definitely happening isn’t it, in Wellington?

AB: What do you hope people take away from Tom’s Lunch?

LB: A lot of reviews of Fandango or at least in my perception of it, said you gotta stick with it, it’s a slow burner, you gotta keep listening to it and then it’ll open up and show its charms. After five albums of that kind of review, I wanted to do something that had more immediate exuberant energy for people.

AB: Exuberant energy was the feeling during your superb 2014 Big Day Out set. ‘Fiscal Pickle’ is another bangingly entertaining Tom’s Lunch track: “Work like a dog and she never pays me, the trickle down drip’s just a way to haze me.”

LB: The first line is “Seems like I’m the only one who daily dreams of the lonely Iron Lady.”  And last line is: “Waiting for the golden trickle when you’re in a fiscal pickle.” Are you familiar with the trickle-down theory? The idea is if workers’ rights are completely smashed into the ground, and the workers get paid less and have less benefits, ultimately that’ll be better for them. Cos’ everyone up the top, the elite, will be able to make heaps more money and that means that more of it will be able to trickle down to us. That’s just one of those amazing neo-liberal things that somehow seem to have managed to sell to huge number of the population that actually, if they give up their rights and have a worse life, ultimately, they will be better. I find it completely ridiculous. It’s re-imagining that as like a golden shower, really.

Margaret Thatcher’s one of the original, most powerful champions of that shit: smashing the unions, taking away workers’ rights, targeting the poorest and most defenseless humans as being lazy and pathetic and thus deserving no help but only spite. And that’s something the current government in New Zealand seems to be picking up.

LB: You know it’s got four basses? The riff is actually all bass and not guitars. No lyrics just: “Pom-gum-td-td-td”. I played a demo. The first thing Sam [Scott] says “That’s undeniably fun” and so I said “Undeniably fun – yes, tick! Let’s go for that one!”  So maybe there’s a lesson in there for all of us – follow the fun.

LB: The much maligned Krisk. Which I had a listen to recently, and I thought, “the fuck’s wrong with people? It’s just a bit of a fun piece of shit.” It was just a bit of tongue-in-cheek throwawayness. You don’t hafta get all precious about it, eh? Yep, I’m glad you say that. I find it highly entertaining.

AB: Do you have musical memories from Wroclaw, Poland?

LB: Had some piano lessons when I was about five, but they were just typical funny piano, the thing I do remember was that the piano teacher was a mad Catholic. He would bring around little Catholic kids’ mini zines, with little stories from the Bible and little cartoons for kids.

AB:  Tell me about a most memorable gig?

AB: This was 2011, the Buffalo Tour. Would you go to Glastonbury again?

LB: Probably. But it was pretty horrific. I don’t know about you, but I don’t like to be somewhere where I have to feel intense fear and anxiety when I have to go for a poo. “Oh my god. Oh my god, what am I going to do, where am I going to go, look at that, all the toilets are disgusting.” There were sanitary pads stuck into the corners of the portaloos. Bloody pads. You’d lift up the lid of a portaloo and the shit would actually be like that, like pretty much touching the bottom of the lid, and they’d have massive tractors with silage tanks at the back siphoning shit out of the portaloos the entire time. I found it quite traumatic. Our tent was about twenty metres away from the rave tent, so we had a ‘fuckin’ Glastonbury banging rave’ like twenty metres away from us, Butz-butz-butz-butz. I think the only way people do it, because it’s England, they just slam the drugs, pretty much, and so it just doesn’t matter.