I adore Marlon’s song ‘Nobody Gets What They Want Anymore’ – that refrain gets me every time I hear it, and ‘Vampire Again’ deserves a big vote for the line “I’m a swooper and you know it”. But I have chosen ‘Beautiful Dress’ from Marlon’s album full of heartbreak, Make Way For Love. ‘Beautiful Dress’ takes me to a place I used to get taken to when I was very young, getting lost listening to my mum’s Dusty Springfield albums – it transports me in exactly the same way Dusty’s ‘I Don’t Know What To Do With Myself’ did. When I listen to ‘Beautiful Dress’, I feel lost, found, in love, broken-hearted and swept away. The way the melody changes and the vocal intensifies on the bittersweet and profound lyric – “The hardest thing about love, is that is has to burn all the time” – the way it builds and takes the song a step higher to the final chorus is completely inspired.

During the 1980s and 90s, Herbs, our pioneers of New Zealand reggae, really captured and defined the New Zealand sound of the Pacific – they climbed the charts, and entered the Top 20 ten times. ‘Slice of Heaven’ (with Dave Dobbyn) reached No.1 on both the New Zealand and Australian charts. Their gently defiant 1982 release ‘French Letter’ – questioning the French nuclear testing in the South Pacific – became a local anthem expressing New Zealand’s anti-nuclear stance. The song was again released in 1995 when the French resumed their nuclear testing at Mururoa Atoll. The evocative sound of the accordion played over the reggae skank in the opening bars of the song gives an immediate impression of France with the sway of the Pacific. I sang lead on this song on tour with When The Cat’s Away – and the memory of playing this to summer audiences singing “Nuclear free yeah!” shines strong and warm.

The cyclic finger-picked acoustic guitar introduces this song with all the intimacy of a Joni Mitchell Blue-era tale of travelling through a lonely landscape. Hollie’s vocal draws me in as if she is singing a wistful secret just to me, and it reminds me of Nick Drake. Those two elements combined with the elegant and mysterious lyric are enough to win me over and want to listen to this song over and over to see if I can crack the code of what it is about. “I think of you on the dancefloor of a stuccoed motel.” Musically the song starts tenderly and builds and blooms into a moment of liberation, cleverly mirroring the lyrics of imprisonment into freedom. When I heard an interview with Hollie explaining that the song was written about sitting next to an inmate on a long bus journey – and hearing his story of watching the Olympics on TV before being led back to the cells – I thought, “Damn you Hollie Fullbrook, you have just written a perfect song.”

Delaney Davidson & Barry Saunders – ‘Out of Our Hands’

Trying to narrow this list down to my definitive top 10 New Zealand songs was one difficult exercise – the list can change from day to day. I could easily wipe out 10 songs just by name-checking Barry Saunders and Delaney Davidson tunes. So it is a good thing that I absolutely love this track and we get two of my favourite writers for the price of one. This track is like a genius lost spaghetti western song from the late 60s. Every part of the song is packed with hooks and earworms glued together with the perfect big reverbed production, strong vocal harmonies and deep octave guitar twangs. The genius move is the whistling and harmonica break. “Come Back come back won’t you please come back my way!” Love it.

I performed live with Shona Laing in the late 1980s. Singing backing vocals with her on those songs was such a thrill. To wrap my voice around her strong and true delivery, to feel the energy of her performance – to surf on that was a feeling that I really missed when I went to the UK, and a memory I cherish. Like most of our great songwriters Shona has so many strong songs and it is hard to pick just one song from her catalogue. There’s ‘1905’, ‘Soviet Snow’, ‘Drive Baby Drive’ and so many more – all with so much melodic and lyrical strength. It was the concise and precise lyric of ‘Glad I’m Not a Kennedy’ that was the deciding factor for me. To articulate the nature of such an iconic family and historical event within three minutes and 25 seconds is awe inspiring. “Wearing the fame like a loaded gun / Tied up with a rosary / Ooh, I'm glad I'm not a Kennedy.”

‘White Valiant’ unfolds like a dark and brooding short film, revealing in the first verse that the narrator is the driver of the car. He knows his passenger more than the passenger knows him and he knows the roads and the landscape too. The landscape almost takes on a character in the story – the long bowing sounds and guitar slides add to the song’s creepy and claustrophobic feeling of being carried along and becoming worried or increasingly aware that the driver may not be going where you want to go. The verse conveys a dark and ominous tension both musically and lyrically. The song’s melodic lift into the chorus has to be one of my favourite musical moments – and the lyric is so evocative: “You can still see the moon / Though it's the middle of the morning / You can smell the clay / Like I say, you can count yourself lucky / Not many people know this way.” A masterpiece.

Reduction Agents  – ‘Waiting For Your Love’

‘Waiting for Your Love’ is the perfect pop song, it is an ear-to-ear grinner of a song. So succinct, no wasted moments, no periphery, with three distinct parts ­– the verses are stripped back and hooky as hell, and then Beatles-ish backing vocals lift up the equally catchy pre-chorus. We don’t get the payoff of the “Waiting for your love!” chorus until after the second verse and pre-chorus ... it is perfect in its triple-tracked vocal distortion and exuberance and so satisfying when it does arrive. So hard not to get caught up in the chaos and sheer delight of this song. The album The Dance Reduction Agents is such a classic that Lil' Chief Records released a tribute album with different artists covering the songs. Liam Finn also does a cracking version of this song, but every song is a winner and they all belong on this list.

Humphreys & Keen – ‘The End of the Golden Weather’

The Overflow by Humphreys & Keen is one of my favourite albums. Graeme Humphries and Peter Keen are the songwriting duo from the Able Tasmans – and while the baroque style and melodic sense of the Able Tasmans runs through this album, the production by Andre Upston is rich warm and beautiful. The vocal in verses of the ‘End of the Golden Weather’ is centred around the piano melody, simple and regular, almost nursery rhyme like. The long, e-bowed guitar notes bring in the power, but there are delicate moments throughout song. The lift into the chorus is bittersweet and beautiful, yet conveys a sense of loss or defeat. I also love the outro and how it winds down and finishes on the most majestic piano climb.

There is something about the nature of the songs on Aldous Harding’s 2019 Designer album that reminds me of the absurdity of Noel Fielding’s comedy and his weird collage of characters. I don’t really want to try and decode what Aldous is singing about or telling us – I just want to let her imagery lead me into some other reality. With John Parish’s production and perfectly placed instrumentation, we are aware of every vocal nuance. Aldous’s voice starts low and steady: “Why, what am I doing in Dubai? / In the prime of my life/ Do you love me?” How is that for an intriguing first line? The rest of the song lives up to that with a held-back pace, naked instruments appearing and disappearing and the magical language and ever-changing character of Aldous’s vocal delivery: “I drove my inner child to a show / It talked all the way home / And the nectar / Zoo eyes, zoo eyes, zoo eyes.”

‘Secret Girl’ is the opening track from Ed Cake’s album Downtown Puff, released in 2004. Ed’s voice is stunning in this song, as is his production. The Neil Young-ish guitar runs throughout the song and the mood is brooding  and menacing. “You got a secret girl?” The repetition of that question feels more insistent as the song progresses and makes me feel glad I am not the one being asked the question ... sounds like a sticky situation. 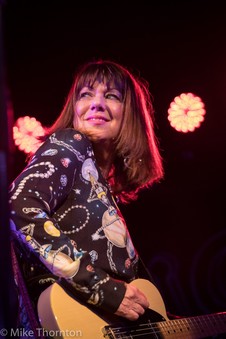 Dianne Swann is a singer-songwriter and member of The Bads, and previously a member of When the Cat’s Away, Everything That Flies, Boom Boom Mancini, and Julie Dolphin. She has also backed Shona Laing and Tim Finn. In May 2020 she released ‘Show Your Heart’, from her forthcoming first solo album. Dianne is also a music commentator on RNZ National.