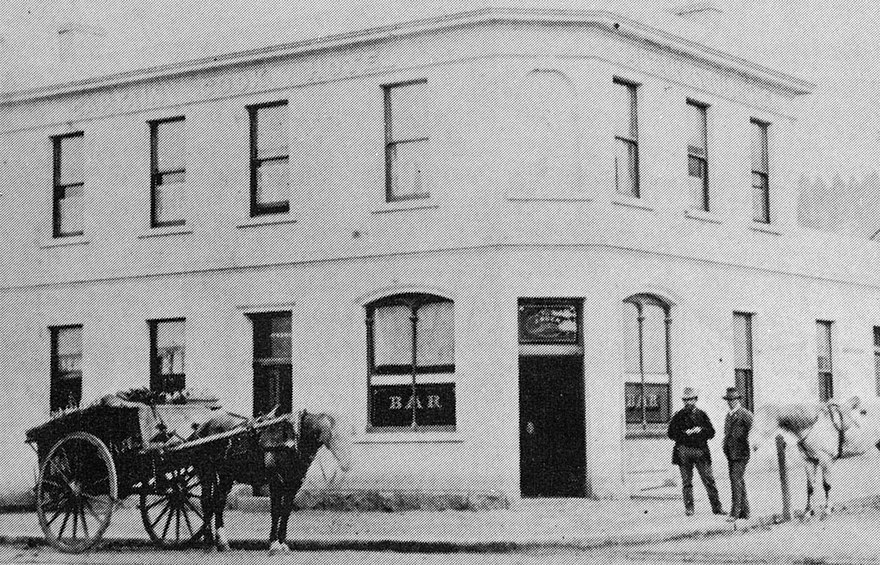 The Captain Cook Hotel did not impress the great New Zealand writer Maurice Duggan in 1960.

Duggan, spending the year in Dunedin as Burns Fellow at the University of Otago, reported on an after hours drinking session in the back bar.

“The awful spectacle of the New Zealander enjoying himself. Without strong drink that would be an unendurable sight. The place is crammed to bursting with crazy humanity.”

This jaundiced observation may well have been the definitive comment on the historic hostelry.

The Captain Cook Hotel was opened by Michael Brown in 1864, as Dunedin swelled as a result of the Central Otago Gold Rush.

Even in its earliest years, the hotel was a venue for performance – a status it maintained for over 150 years.

Brown’s wooden structure was demolished in 1874, making way for the brick and stone building that still stands on the corner of Albany and Great King Streets. 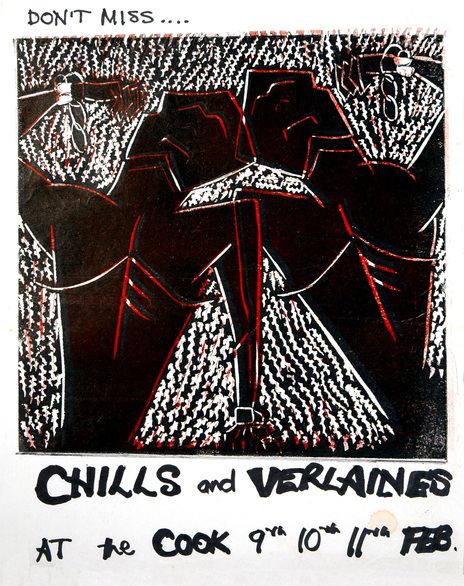 1984 poster for The Captain Cook - Design by Sarah Caselberg

The defunct Dunedin newspaper Otago Witness described it at the time as, “two storeys high, including on the ground floor a bar, bar-parlour, private parlour, billiard room, kitchen, servants’ rooms and pantries. Upstairs will principally be bedrooms and private parlours.”

Five years later the University of Otago moved from Dunedin’s Exchange to the city’s North End, and the Cook quickly became central to student cultural life.

As the liberal spirit of the post-First World War years swept New Zealand, a generation of bohemian students revelled in their freedom through jazz and drinking.

An unattributed 1923 poem entitled Poverty and Happiness captured the mood of the times:

An afternoon – “at home” – at Captain Cook’s hostel,

Discussing politics and other roguery,

With a few kindred and beer imbibing spirits.

Others who frequented the establishment during the 1960s and 1970s included writers James K Baxter, Hone Tuwhare, Cilla McQueen, and Sam Hunt, and artists such as Ralph Hotere. That scene was centred on the Corner Bar, while the more extreme drinking occurred in the main bar. Meanwhile, upstairs was where the bands played, and where students tended to go. 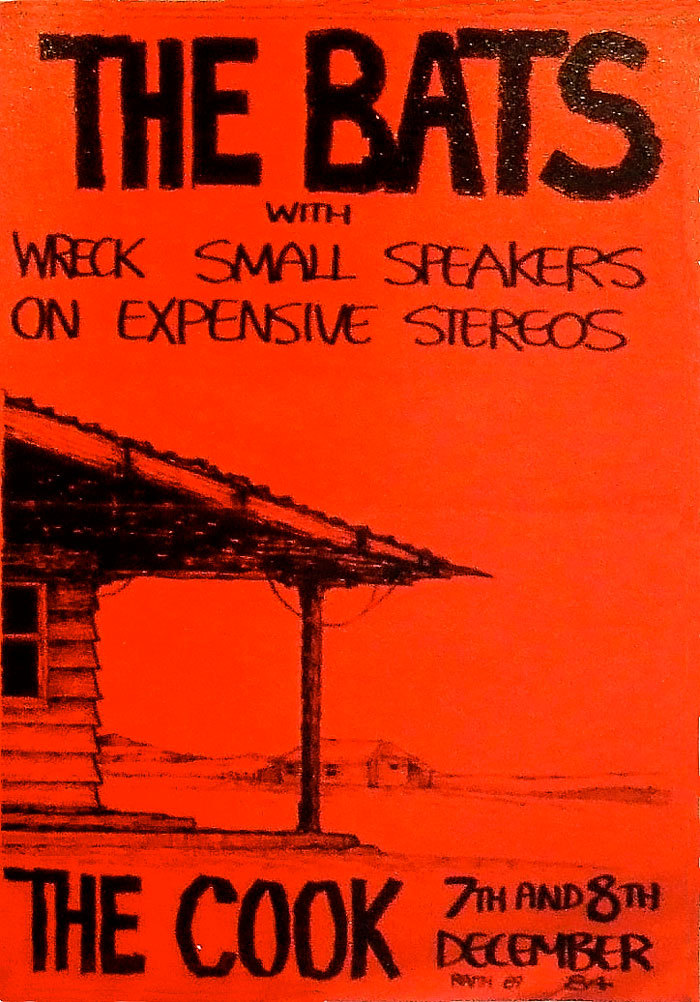 The Bats and Wreck Small Speakers On Expensive Stereos at The Captain Cook, December 1984

In the late 1970s touring bands including Hello Sailor, and Dunedin covers bands like Cruze and Rockylox would play there, and be heckled by one Chris Knox. Soon he formed seminal punk act The Enemy, which moved to Auckland and morphed into Toy Love. In 1980 that band played its last ever Dunedin show upstairs at the now Captain Cook Tavern. 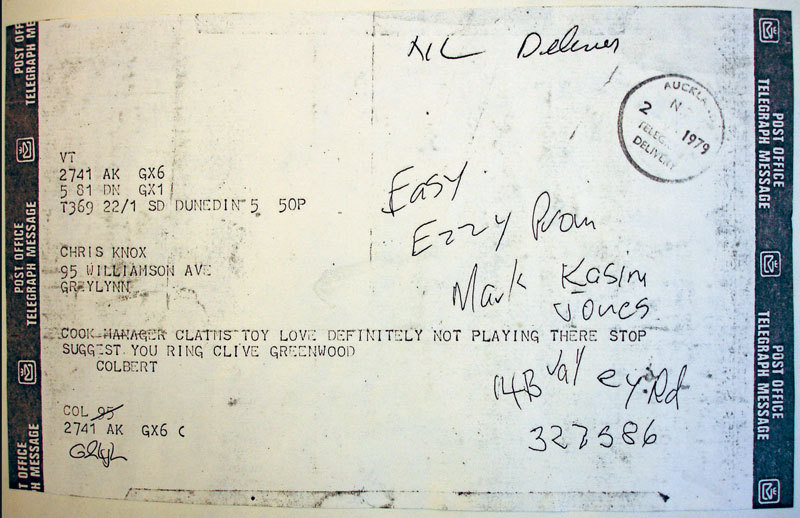 When the management of the Cook Hotel in Dunedin learnt that Toy Love contained members of The Enemy they cancelled their first gigs. Here's the telegram from Roy Colbert to the band. - Toy Love Collection

The venue was key to the wave of young Dunedin bands that followed – The Clean, The Chills, Look Blue Go Purple, The Rip, The Verlaines and others associated with the mythical Dunedin Sound.

“It was pretty hot and sweaty, but that was kind of fun in its own way,” The Verlaines’ Graeme Downes recently noted. “It was a very low stage, so the audience was right up against you and you couldn't see the bands if you were right down the back.”

But over the decades both Dunedin and student culture changed and the Cook became more known for lowest common denominator student behaviour rather than anything resembling a cultural experience. 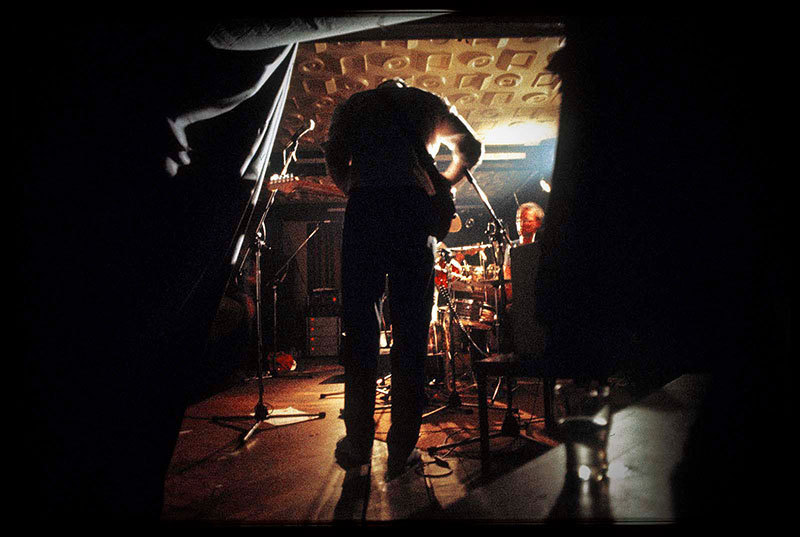 In the 2000s the hotel became host to the notorious Cookathon all day drinking binges at the beginning of the university semesters. Paying scant regard to liquor licensing laws, these events virtually signalled the Cook’s impending demise.

The University of Otago objected to the renewal of the owners’ licence. Ultimately the tertiary institution’s concerted efforts to change student drinking culture in Dunedin rendered the Captain Cook Hotel an untenable operation.

The doors were closed on 16 June 2013, and stayed closed for several years before reopening in 2016 as a gastropub. Several gigs happened during this period and in 2018 the pub adopted a more permanent focus on live gigs. In 2019, it was known as The Cook, and in 2020 the name was changed to Dive.

A Few Words on the Closing of The Cook

Goodbye to Tiger Taylor & his tattooed muscles
Guarding the door;
Goodbye to your sweet under-aged self
In flight down the fire escape;

Goodbye to Heavenly Bodies,
& Chris Knox’s toothy snarl;
Goodbye to those fresh faces & the boy
With the purple guitar

Goodbye to the worldliness of those old faces on the bar
Who were not so old or worldly;
Goodbye to the guy in leather calling out at midnight
For an Iggy Pop song

Goodbye to the mindless head-butts,
The cut arms & the smashed-glass faces.
Goodbye to the Tuesday Morning Pool Players
& the poet rolling one between shots.

Goodbye to those who never made the last round
Who saw the afternoon light brilliant in a jug,
Goodbye to the wild electricity of youth,
our beginning hearts & the siren on closing time. 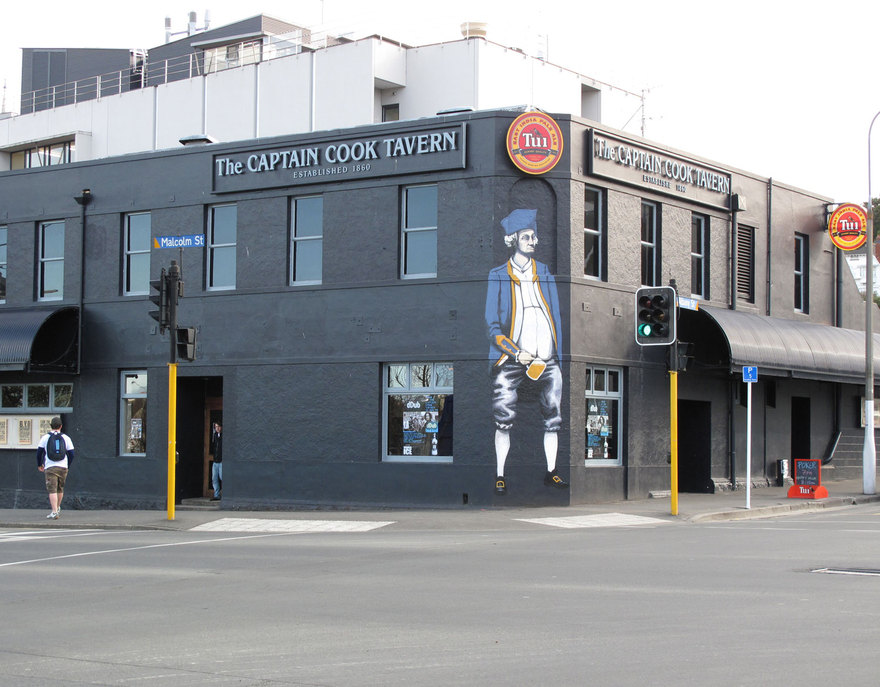 Reflections on the Captain Cook