f t
If anyone deserves the saying “Give the drummer some” it was Frank Gibson Sr. He was surely the most influential drummer in Auckland after the Second World War.

In the 1940s he played for the city’s top big bands; in 1956 he formed the country’s first professional rock and roll band; and in 1978 he opened the specialist instrument store Drum City in Balmoral, which quickly became a Mecca for anyone intent on keeping the beat. Another epithet he deserves is “the hardest working man in show-business” – in 1946, for example, he played 253 nights of the year, while also keeping his day job at the Post Office.

Born in 1924, Gibson grew up in Thames and he began playing drums in his brother’s dance band at the age of 15. His drum kit cost £25, and it consisted of a bass drum, a snare, a cymbal, and a pair of sticks. In 1941, after a stint in a band run by Herb Walker – the father of jazz pianist Mike Walker – Gibson moved to Auckland. He was just 17, and spent a few months getting pick-up gigs around town. Just when he was getting desperate, he was asked to fill in for a drummer who was ill. The gig was at the stylish Metropole Cabaret on Queen Street, playing in the band of star trumpeter Phil Campbell. Soon, Gibson was playing there regularly.

A pivotal wartime experience was hearing the band of American swing star Artie Shaw perform in Auckland. The audience was mostly US Marines; Gibson was unable to get in, so had to listen to Shaw’s drummer Dave Tough from outside the venue. He joined the navy in 1942, but whenever he had leave he played with Epi Shalfoon’s band, which filled the Crystal Palace in Mt Eden with dancers on Saturday nights.

Shalfoon’s band was probably the best gig in town. He was known for hiring top players, and letting them swing. “It was a training ground for just about every musician of note in Auckland,” Gibson recalled to broadcaster Jim Sutton. “The number of people who used to sit in was incredible. Every Saturday night, you’d start with a five or six-piece band and sometimes you’d wind up with nine.”

Gibson played with Shalfoon for eight years, while also performing with the 1YA and 1YD radio bands led by musicians such as Julian Lee, Crombie Murdoch and Lew Campbell. He recorded for Tanza, and drummed for old-school dance band leader Chips Healy at the Wintergarden, beneath the Civic picture theatre.

Trumpeter Jim Warren recalled seeing Gibson performing one night at the Orange Ballroom. “He was so tired he was practically playing in his sleep. I remember thinking, ‘That’s how you get good – you play and play until it happens automatically’.”

in 1956 Gibson to put together Auckland’s first professional rock and roll group.

In October 1956, budding entrepreneur Dave Dunningham sensed that a new dance craze called rock and roll was going to hugely popular. For a gig at the Yugoslav Hall, he recruited Gibson to put together Auckland’s first professional rock and roll group. The men he hired were all jazz musicians: trumpeter Bob Griffith, trombonist Neil Dunningham, pianist Don Grant, saxophonist Pem Sheppard, bass player Bob Ewing, vocalist Steve Shaw, with Gibson on drums. At first there was no guitarist. “All Frank knew were the jazz musicians,” recalled Merv Thomas. “You couldn’t ring up the likes of Bob Paris, because they didn’t exist.”

A week after the debut of Frank Gibson’s All Star Rock’n’Rollers, Dunningham shifted the dance along Hobson Street to the Trades Hall, and re-named it the Jive Centre. “We must have had 2,000 customers in the first two nights,” said Gibson, who soon hired younger players such as Thomas and saxophonist Bernie Allen. Less than three weeks after the Yugoslav Hall dance, Gibson’s second group made its debut at the Auckland Town Hall. All 750 tickets were snapped up by teenagers eager to dance. Gibson only played rock and roll for a year, but in that time took his All Stars on tour to Thames, Hamilton, Whangarei and Rotorua.

Known for his showmanship – using drum-sticks that glowed in the dark, playing with two bass drums, taking dazzling, melodic solos, performing lunchtime gigs to crowds in Vulcan Lane – Gibson was upstaged in 1954 when he was joined by his son at an Auckland Town Hall concert. Frank Gibson Jr was just eight years old when he made his debut, playing the first of many drum duets with his father, and would go on to become the next generation’s leading drummer.

By then, Gibson Sr was already the doyen of Auckland drummers. He generously passed on his decades of experience, through outlets such as a newsletter he wrote while working for Lewis Eady’s, or later at his own shop, Drum City, holding workshops and seminars with international guests. A charismatic performer and astute businessman, he was also known for his pranks – such as selling left-handed drum-sticks – and his quips. “When I heard ‘See You Later, Alligator’,” he once joked, “I gave up music and started playing rock and roll.” Frank Gibson Sr died in 1998. 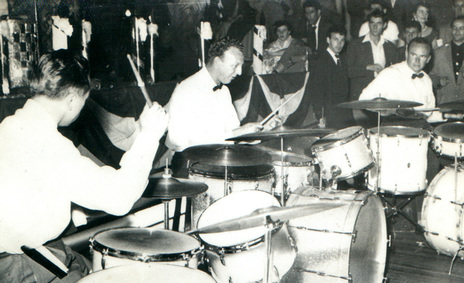 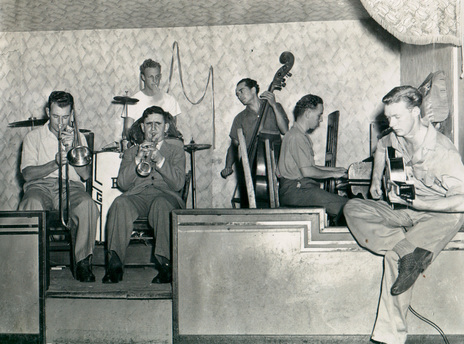 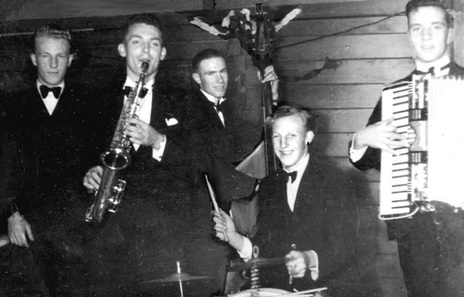 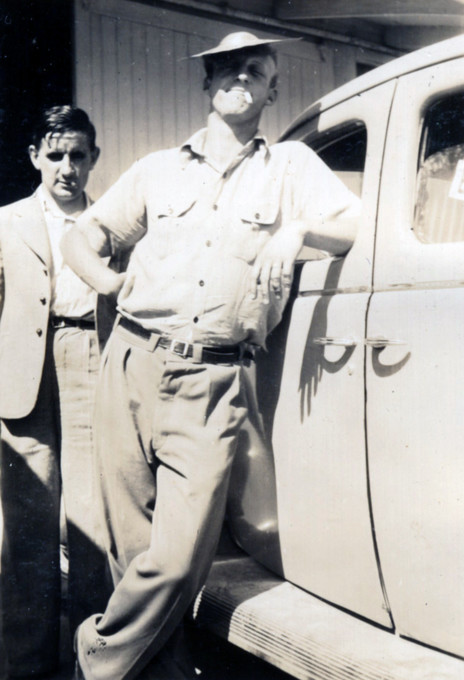 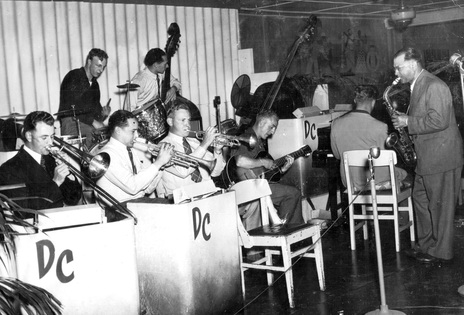 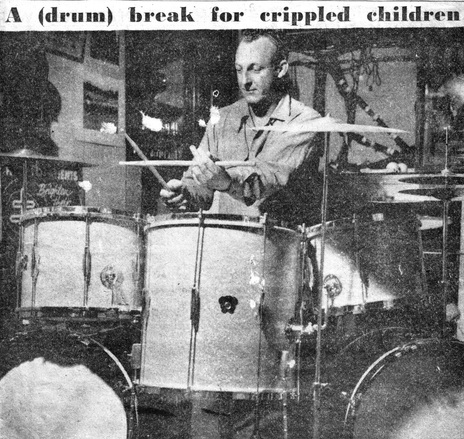 Frank tries out his new set of twin-bass drums – the first in NZ – to be used at a charity concert for the Crippled Children's Fund at His Majesty's in Auckland. Auckland Star, 17 December, 1954. 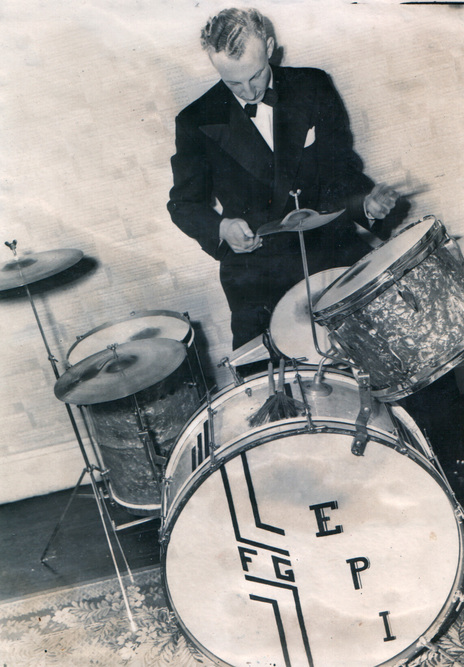 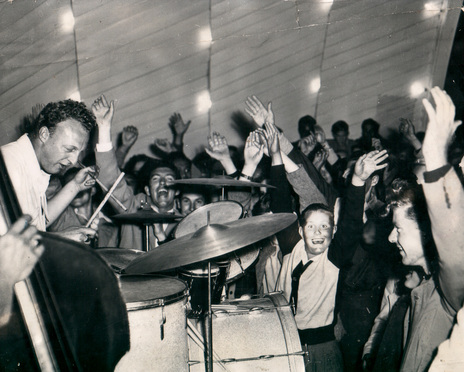 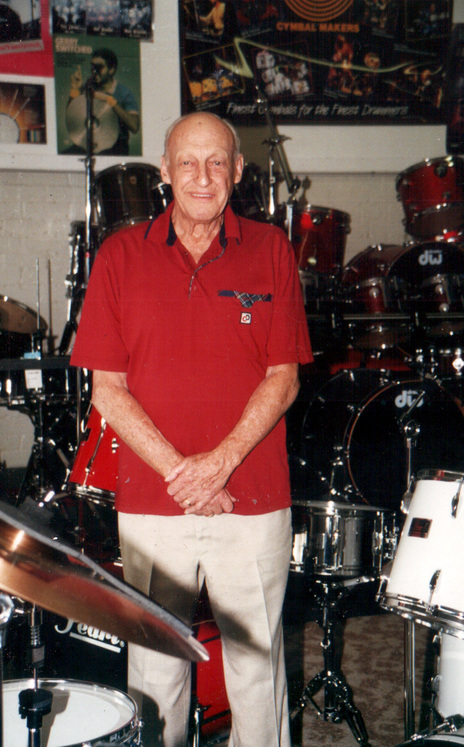 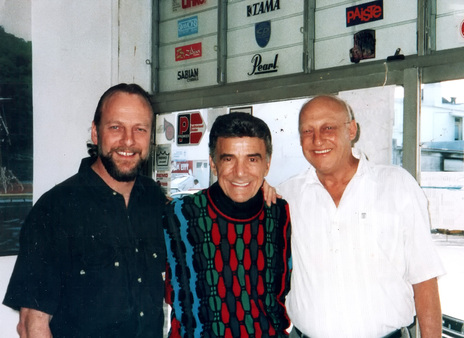 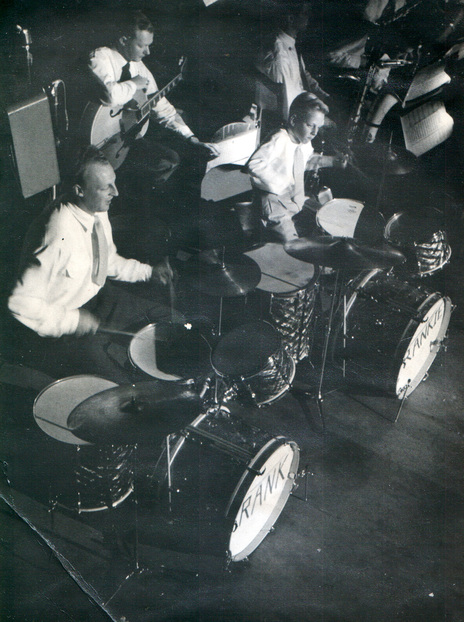 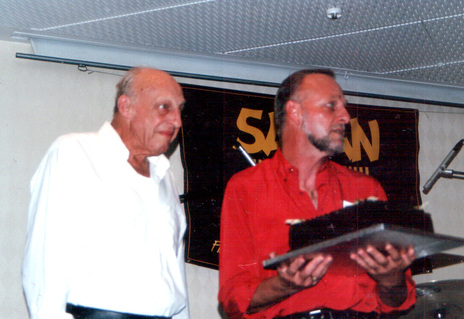 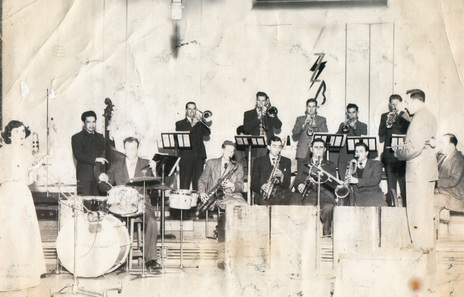 Esme Stephens with the 1ZB Radio Band in the early 1950s, led on this occasion by Bob Leach - a treasured item from the Frank Gibson Sr collection 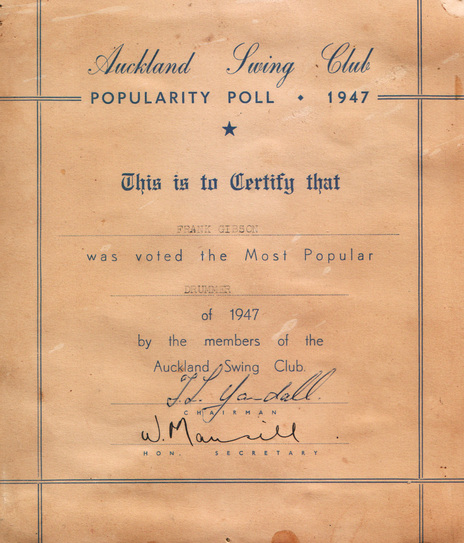 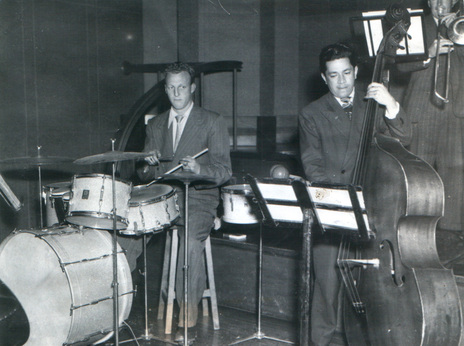 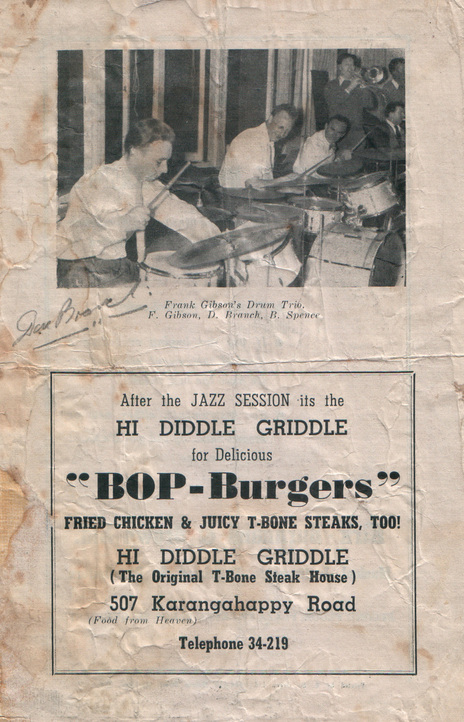 Frank Gibson kept fastidious records of all his gigs in the 1940s, with details of pay and notes about each show. These still exist in his son's private collection.