Mikey was in my bedroom!

Big hair and big schemes: Push Push's plans for global domination, as expressed in Rip It Up, March 1992.

Love ’em or hate ’em, Push Push are fast becoming our definitive Rock Gods. They appear everywhere, from other people’s albums to AIDS benefits. The boys are truly busy and with an album, A Trillion Shades of Happy, on the streets, things are only going to get worse for them.

In order to get a suitably Rock God-like interview, we initially planned to participate in one of the boys’ favourite pastimes, jet-skiing, but not wanting to be humiliated and wet I decided to out-staunch the boys and broke my foot in four places, thus limiting our activity. After a little time-shuffling, the man himself, Mikey Havoc, roared up to my house in his Merc: late, hung over and ready to talk. (Actually he was on time and in a messed up Escort, but that seems boring.) 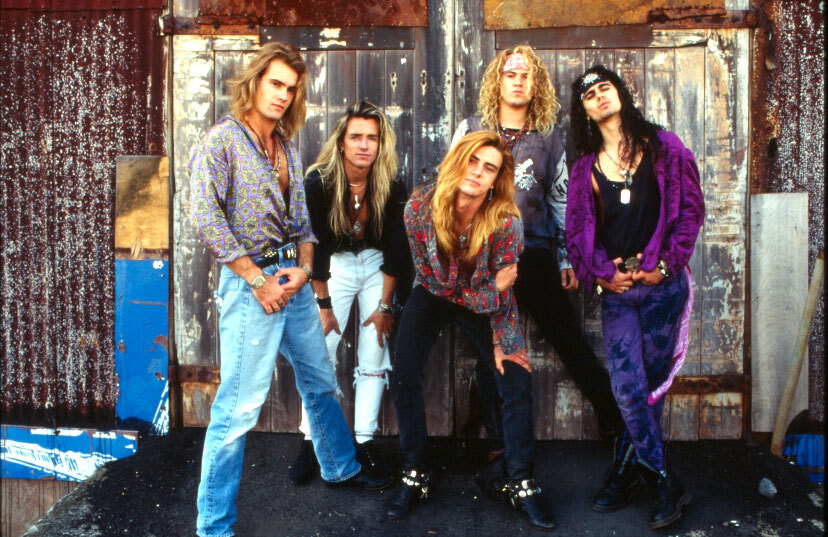 Probably the most obvious thing to talk about is A Trillion Shades of Happy, which is a fine-sounding album. Push Push, like any other metal-orientated band, rely heavily on the grand gesture, the overstatement, and the album is just that. It’s utterly huge sounding, a wild romp full of guitars and drums and screaming and lots of hooks: just the right combination of pop and deviancy to appeal to the mainstream without making it utterly unlistenable for the more left-field listeners. Even I found plenty to tap my toes to, and I’m pretty representative of the obnoxious and cynical music fan element. Basically, it’s a good album.

Well, just by how “rock” it all sounds.

“Same for us. It was like, ‘Well this is our first album’, and I always think back to Too Fast for Love by Motley Crue, which was a shitty album in its sound and everything. It’s got the songs, but it’s like a jumble sale. I suppose I just never expected to get something this good with us and Tim Foreman producing. Tim’s a great producer, but he’d never done anything this hard. In the end it turned out to be 100 percent of everything I could have hoped for.” 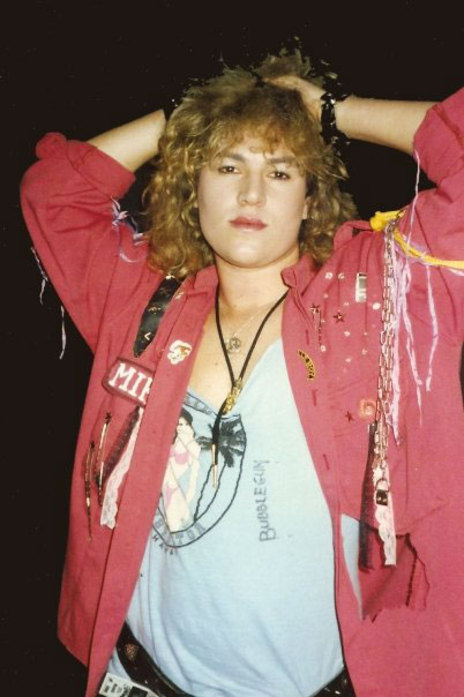 New Zealanders have never really been able to get that big rock sound, but now it seems to be happening.

“From day one when we started, I never thought there was the confidence in local bands, nothing that made you go WOOOOAAHH!! That whole adrenalin rush thing, that’s what we’re about, and that’s what we wanted for this album.”

Push Push have always had high-energy shows and a lot of that seems to have carried on to the record.

“It comes down to that adrenalin thing. If I could stand still on stage and sing and not get totally sweaty and breathless by the third song, then cool, but because of what we play it’s just not like that, and I can’t imagine being in a band like Wet Wet Wet, just standing there and looking moody. I can see why people might like that, but I’m in a band for the whole rush thing. When we write songs, we write them with all the highs in it, and it’s like as soon as you’re on stage, you hear the guitar go BOOOOOM! And you’re away.”

It’s not just Push Push’s sound that’s on an international level, it’s the whole package. They work hard from the level of live shows, right on up to the whole presentation of the band, including the videos which are in keeping with the over-the-top but classy deal that seems integral to Push Push.

“The latest video was the hardest of the three to do, even from the level of ‘What My Baby Likes’ being a bit dodge as a release. It seemed a bit like a ‘Heeeey Baby’ sort of song, but we thought, ‘Naah, people can work it out for themselves’. The lyrics are all over the place though, I mean I know what I’m going on about, but I couldn’t explain it really. We were thinking, ‘Oh no, this means another performance video’, but I think that’s been good as this captures a lot of the changes in our performance in the year from ‘Trippin’. So I think it fits in really well.

“I think we’ve been really lucky in a lot of ways because as the band’s grown, we’ve asssembled a really good posse of people who are proud of what they do. We’ve got the Mauger brothers to do our videos and when they did ‘Trippin’ they’d only ever made one other video and that was Ngaire’s, which really is the other end of the spectrum. We needed a cheap video with a lot of class to it and they put in all their extra effort and it’s started a good partnership. We all just work at it, there’s no star thing, everyone is happy just to be part of something cool happening.”

This whole attitude of working together is something Push Push have always championed, especially in relation to other bands. They would honestly be one of the few local acts I know of who never burn on other local bands, but they have also surprised people with their eclectic support choices. The likes of MC OJ and Rhythm Slave, the Hallelujah Picassos, These Wildings Ways and The Nixons have all graced the stage with Push Push and that’s not even starting on their tour supports, which have stretched to weird Christian Hüsker Dü copy bands from Nelson.

“The idea behind all that has always come from going to see bands and having to sit through support bands doing the same thing as the main act, which is why it’s hard to pick support acts here. Overseas, no one would get a singer/songwriter/guitarist to support Bryan Adams for instance, so why should we do it on a local level? We’re like, ‘Well, we dig the Nixons so why not have them support us?/ Out of the 1000 people at the gig, maybe 100 are thinking, ‘Hey, this is great!’ and I think that’s the best fucking thing in the world. We’ve even got Jan Hellriegel singing on the album and everyone’s probably going ‘muttermuttermutter’, but tough, it worked and we ended up on her album, which is really cool. Unity is what makes things happen.”

Push Push has always had a lot deeper musical roots than people credit them with, not just in a local context, but with overseas acts as well. Let’s face it, long before Nirvana became the band of choice for thousands of university students, their T-shirts were cropping up in Push Push videos and the band has always been on the case with the whole left-field rock thing.

“I think that’s because there’s five different guys in the band and as a band we’re always looking for what’s happening next.

“For a long time all I’d listen to was Faster Pussycat, Guns N’ Roses and Poison. I don’t regret any of that, I don’t regret teasing our hair and wearing lycra because at the time we were the only ones doing it, but since then I’ve found I enjoy all sorts of music, but I really enjoy a few bands, and I want to keep discovering new ones. You just kind of jump ahead of yourself, but that’s good because in this country there’s a massive attitude problem. People are like, ‘Well, should I go to that Mudhoney concert or the Doors show?’ They’re just not very open. People were like, ‘Who’s Nirvana?’ and now I go to the Nirvana show and people look at me with distaste, ‘What’s he doing here?’ Basically, I’m still a huge music fan, I love loud thunder music while Silver grew up on the Meemees and The Dance Exponents and Andy is a real Abba and Kiss star child, so there’s a lot of diverse musical input happening.” 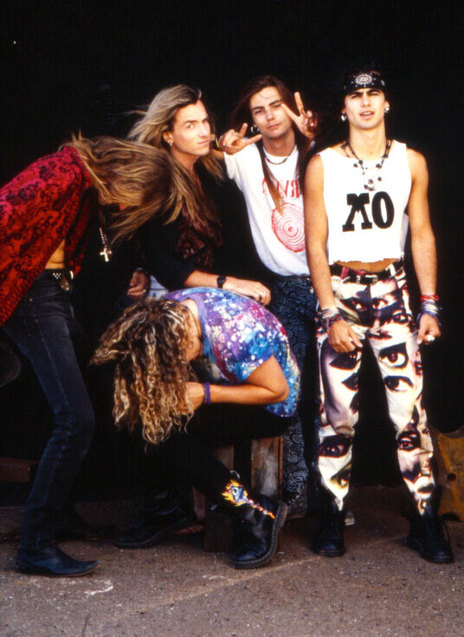 This is all very well, but what about the important stuff, like being a star of sorts in a country like New Zealand? I’ve seen people scream for Push Push’s lights – the band wasn’t even near the stage. Surely that’s what rock’n’roll is all about?

“It’s weird, it’s not like that all the time. In Auckland it can be pretty wild because a lot of the kids have followed what we’ve done, and love it. It’s strange really, you do get some people giving you shit, like people saying, ‘Hey rock star!’ – which is just dumb, really. I don’t know how it put it, as I’m still a huge music fan and I get worked up over bands all the time! Maybe people are so proud to see a local band at this level: you can go see us then buy the songs on a tape.

“It’s cool for us too, ’cause we get to do things like be the first person ever to stage dive in Invercargill, or we get to play Orientation in Dunedin. We were pretty scared, but the student radio down there gave us half an hour on air without wisecracks and then that night there were 1200 students at the show. It’s cool to see this sort of support, and everyone was like ‘Oh, you guys play good music and have fun’, which is really important, I don’t think you could get away with it otherwise, except if you were S.P.U.D. or the Butthole Surfers!”

Touring seems a very important part of the whole deal for Push Push, which is only logical. You can’t be a Rock God if you never play outside of your bedroom.

“The reason we’ve toured so much is that we don’t want to get stuck up here, it can get really discouraging in the city, so it’s nice to get away from that and play to appreciative people. It’s nice to get that experience too, as we don’t aim to play in New Zealand and Australia forever, we want to go the next step and the only way to do that is to get out there and play.

“Touring is so cool, it makes the whole ‘no money and working like an arsehole’ deal okay. People come up to us and say, ‘I see where you’re coming from on that and it means this to me’, which is great, and we’re always meeting new people ’cause things can really go stale when you’re a ‘star’ in Auckland.” 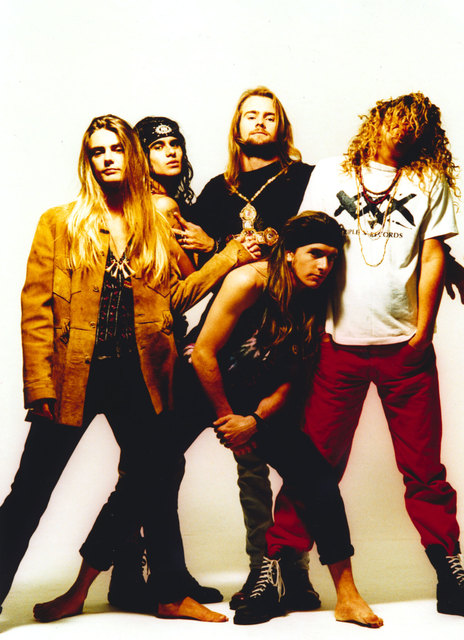 So, finally, I suppose the only question that makes any sense is: What next?

“Musically, I think we’re nowhere near a peak, the songs we’ve written since the album are different again, but sort of an extension, so the next album is not going to sound like A Trillion Shades of Happy, but it will have the same energy, maybe more. I think from a musical point of view there are some good things happening.

“Career wise, the ideal thing would be to crack here and Australia with this album and hope that someone from another country latches on to it – and if not we’ll go there and do the groundwork ourselves. Now that we’ve actually got the album out, touring it is important: but just as important is what to do after that, so that when and if it all happens, we know what we’re doing next. That’s always been the way we’ve thought, and it can be really trying sometimes, like ‘Fuck man, give us a break!’. But I think it’s going to be a really interesting time. I think we’ve got it in us to be interesting anywhere in the world.”

So that, then, is the Push Push master plan: lots of work, lots of noise, and a damn good time had by all. It may just work for them and I hope it does, because if we’re going to have local Rock Gods knocking the mainstream round a bit for us all, we’re in good hands with these guys.