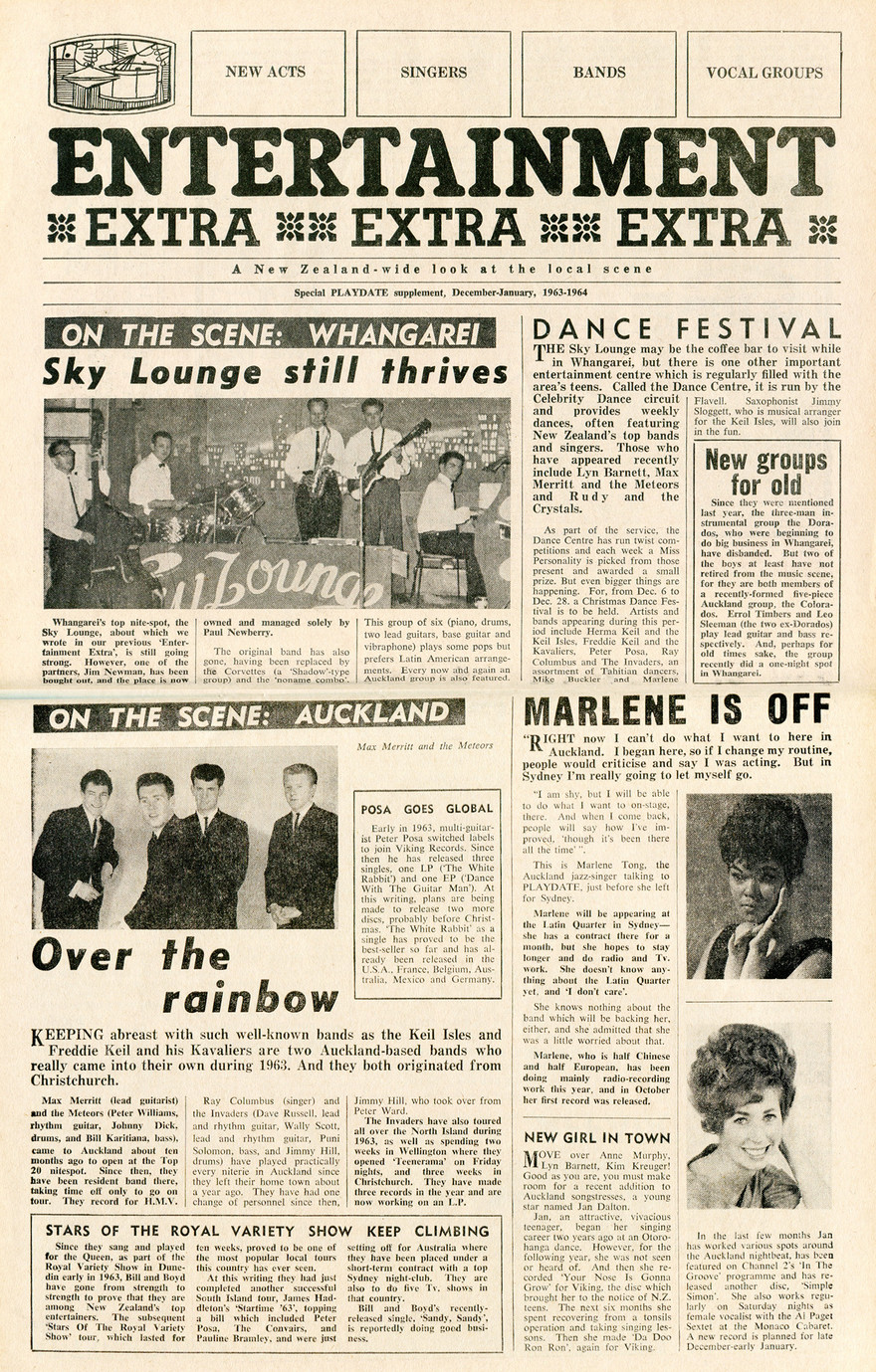 It was the summer before the flood: the last before the Beatles’ arrival had an impact on almost every haircut in New Zealand, and almost every band. Playdate magazine looked forward to the summer of 1963-1964 with a second national entertainment roundup. The work behind these is staggering: information and images arriving by mail from regional correspondents, printing using hot metal type and blocks for photos. In future years, Playdate included a similar, monthly double-page spread of music news. Above: in Whangarei in late 1963 a competition between two “nite-spots” is underway. The Sky Lounge features resident band the Corvettes, and an unnamed combo with a vibraphonist; the Dance Centre is the place to twist to top visiting acts. In Auckland two Christchurch groups have usurped the locals: Max Merritt and the Meteors, and Ray Columbus and the Invaders. Jan Dalton is a songstress on her way up, while Marlene Tong is off to Sydney where she can let herself go. (To enlarge these images, click on them, open in a new tab, then expand.) 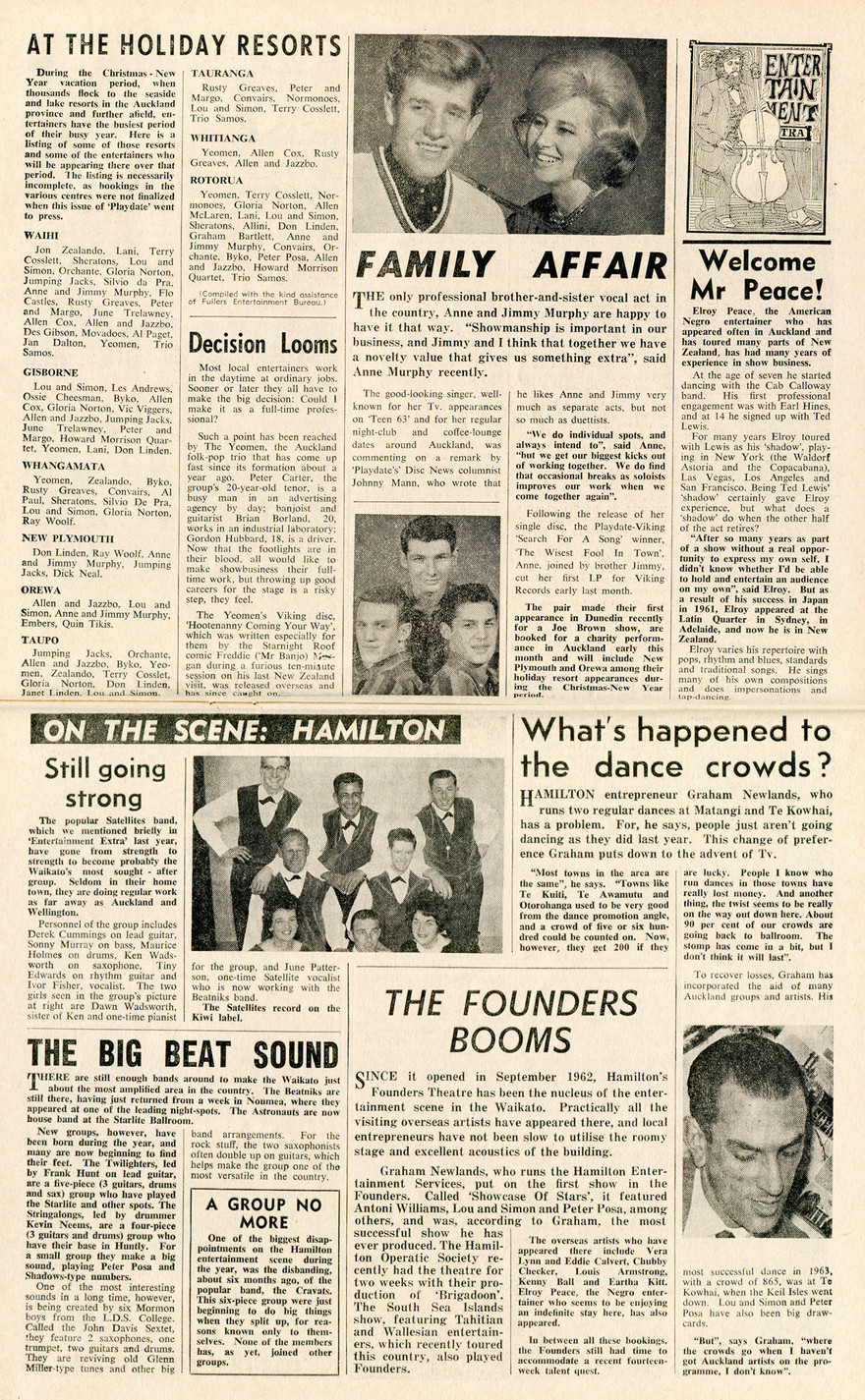 The holiday resorts in the top half of the North Island offer dozens of top New Zealand acts over the summer. Brother and sister vocal duo Anne and Jimmy Murphy have just made their first LP for Viking Records, while folk-pop trio The Yeomen is going professional. In Hamilton, the Founders Theatre has been open a year: an early “Showcase of Stars” featured Toni Williams, Lou and Simon, and Peter Posa, many international acts have been through, and a talent quest ran for 14 weeks. But a local promoter is noticing the impact of TV on attendances at small-town Waikato dancehalls. 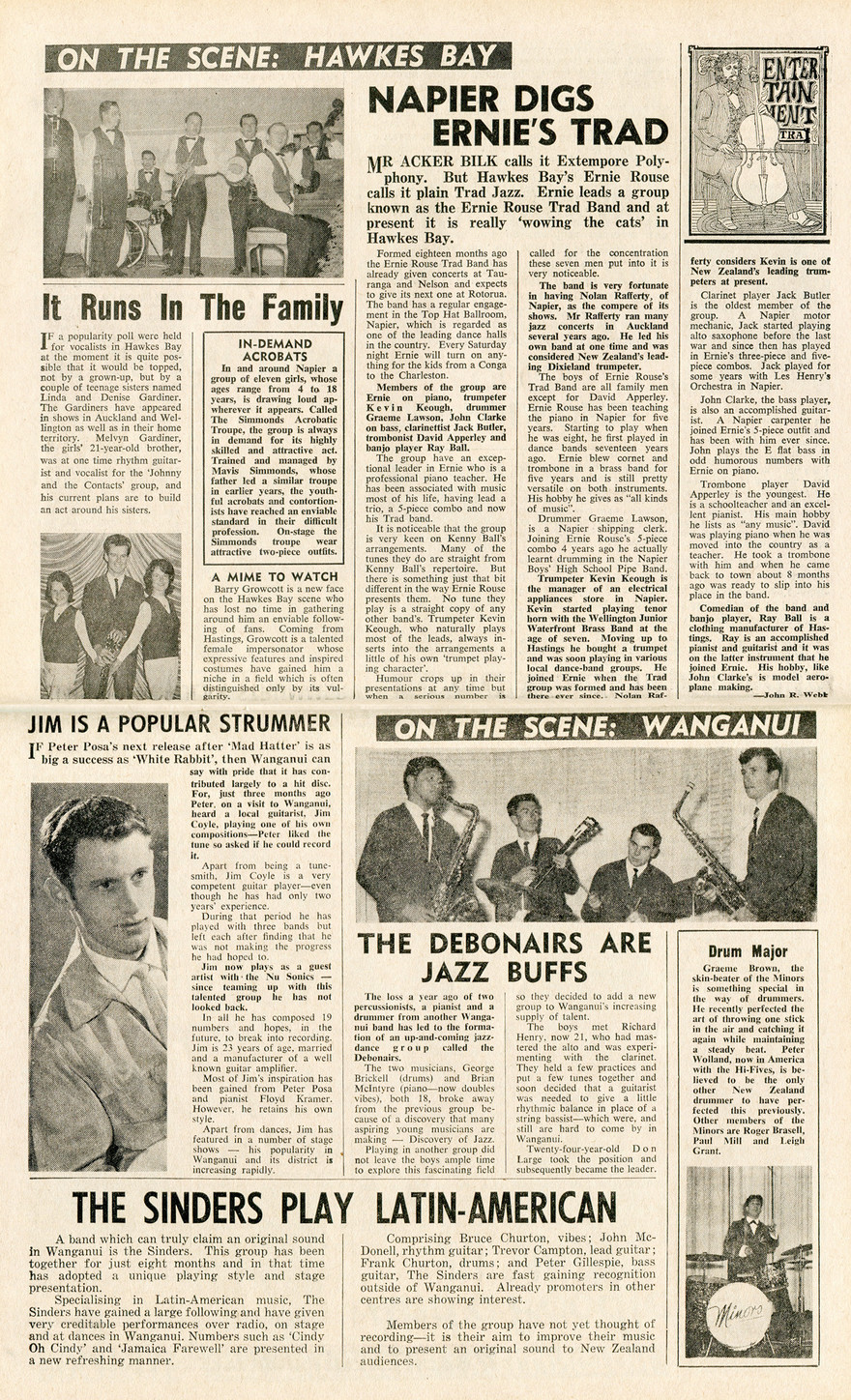 In Hawke’s Bay, Ernie Rouse is already the King of Trad, 18 months into his long career. At the Top Hat Ballroom, “Every Saturday Ernie will turn on anything for the kids from a Conga to the Charleston.” Melvyn Gardiner, former singer/rhythm guitarist with Johnny and the Contacts, plans to form a vocal trio with his younger sisters Linda and Denise. Wanganui is proud that local Jim Coyle (a “popular strummer” and amplifier manufacturer) is about to have an original recorded by Peter Posa. Coyle, who often guested with the NuSonics, would go on to release many solo discs. 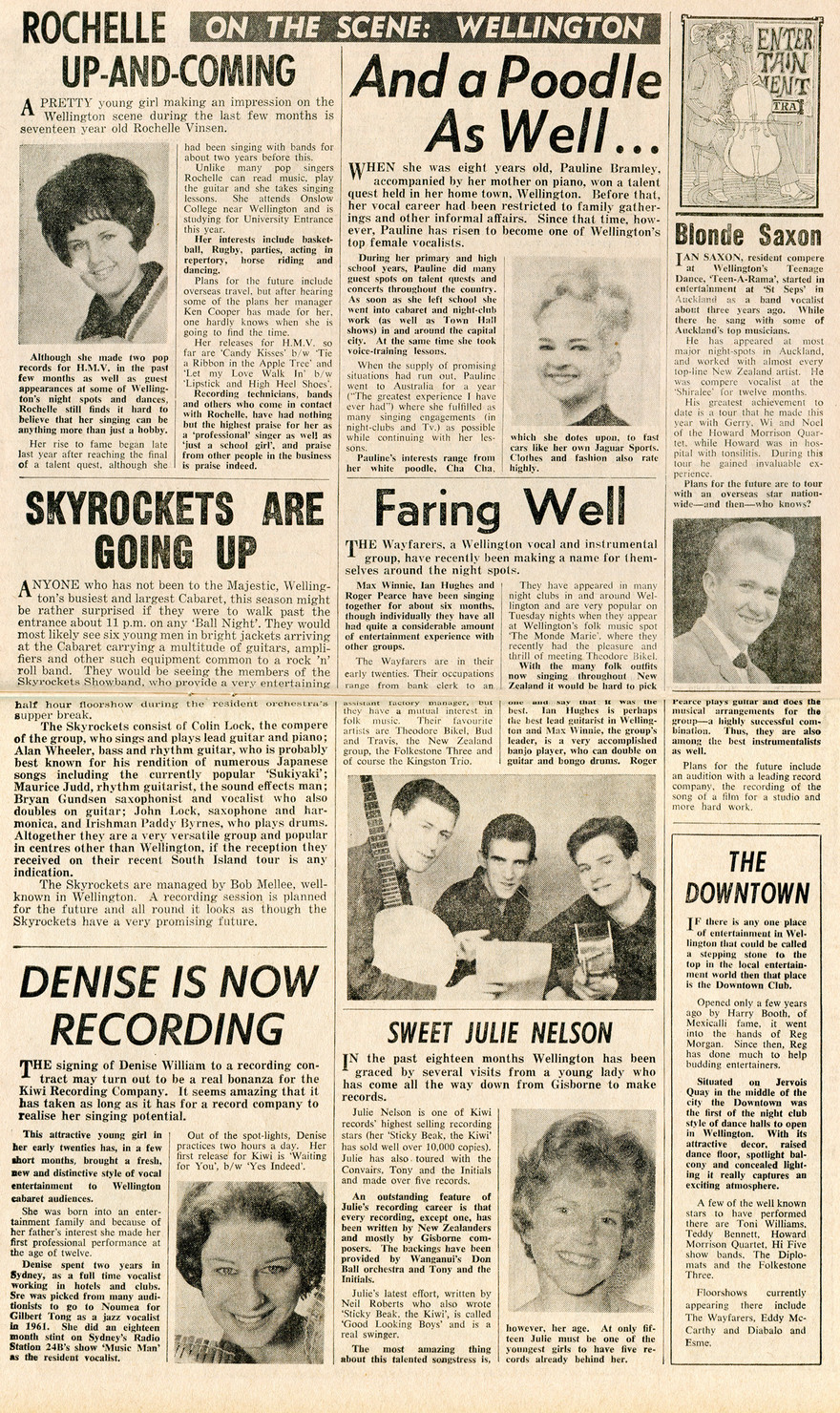 In Wellington, Rochelle Vinsen has made two discs for HMV in 1963, and is about to sit UE at Onslow College. Pauline Bramwell is already a professional cabaret singer, with a poodle called Cha Cha and her own Jaguar sportscar. Julie Nelson from Gisborne is only 15, but has already released five discs, among them ‘Sticky Beak the Kiwi’, which has sold over 10,000 copies. The Wayfarers are riding the folk boom at the Monde Marie, while the Skyrockets Showband plays the late show at the Majestic Cabaret. Resident compere at the Teen-a-Rama dance is Ian Saxon, who this year toured with the Howard Morrison Quartet while Howard had tonsillitis. Saxon’s plans for the future? Who knows. 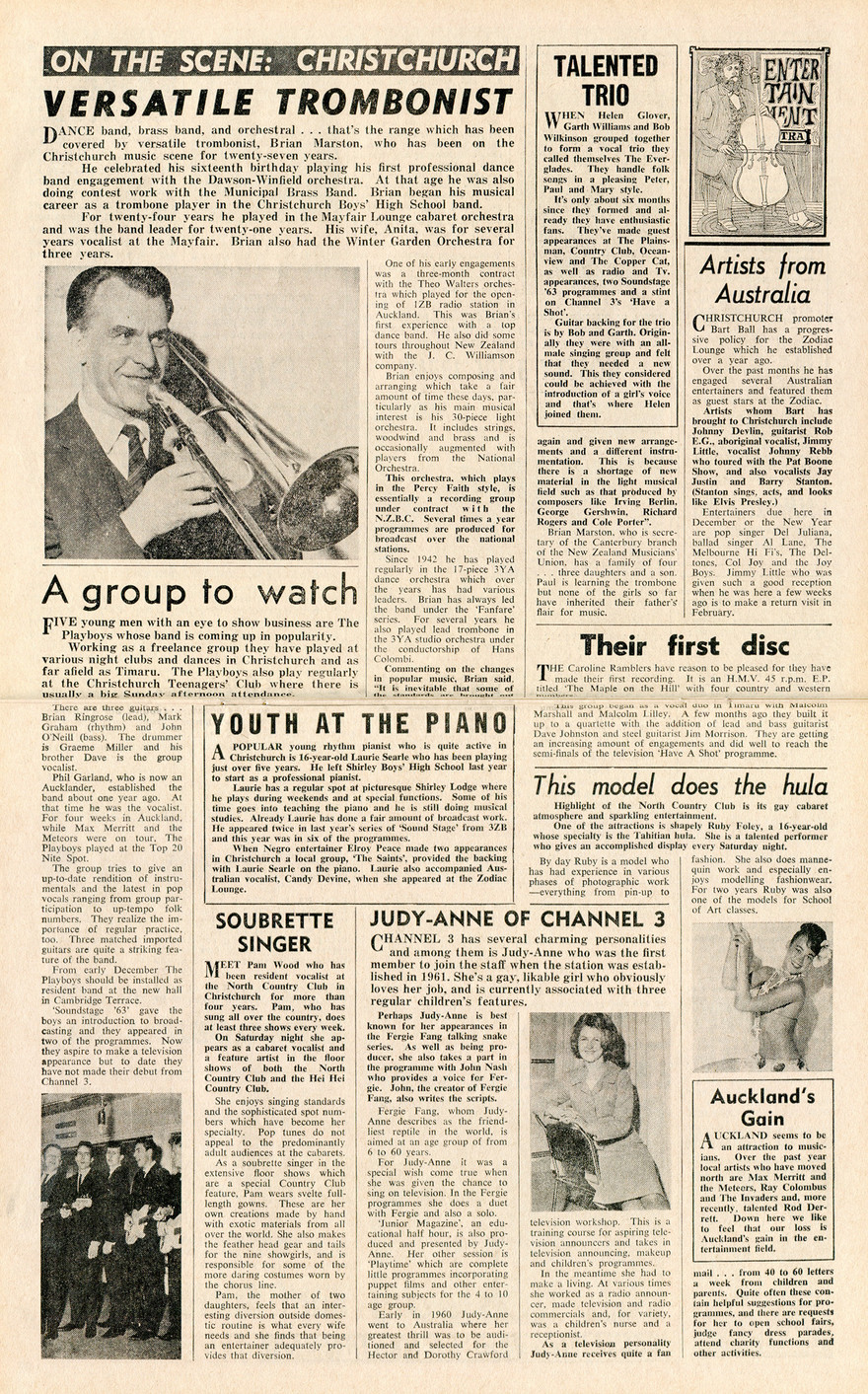 Brian Marston is Mr Music in Christchurch, after 27 years on the scene as arranger, bandleader, and trombonist. One of his earliest gigs was with Theo Walters’ 1ZB Orchestra, and in the mid-1970s he would be the musical director on Popco. The Playboys, no longer featuring Phil Garland, are pulling crowds at the Christchurch Teenagers’ Club on Sunday afternoons, and the Caroline Ramblers have begun their recording career with an interpretation of The Tumbleweeds’ perennial, ‘Maple on the Hill’. Besides Garland, the Invaders, and the Meteors, Christchurch has lost Rod Derrett to the bright lights of Auckland cabaret. 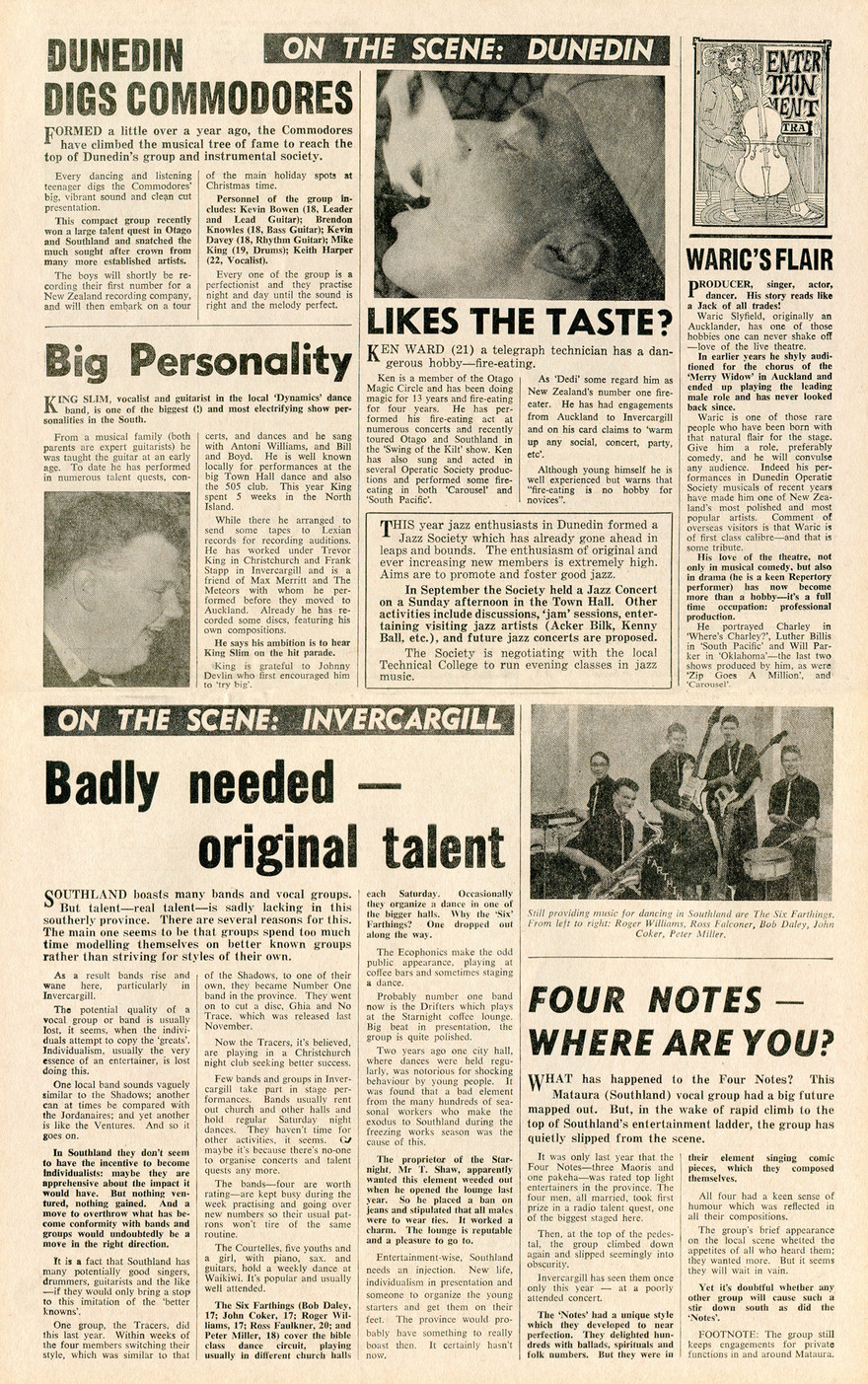 Dunedin in summer offers several acts now lost to time: the Commodores, a clean-cut, twanging teenage quintet; King Slim, vocalist with the Dynamics, who Johnny Devlin has exhorted to “go big”; Ken Word, a fire-eating, operetta-singing telegraph technician; and theatrical all-rounder Waric Slyfield. Invercargill has many bands, but too many imitators of overseas acts, reports Playdate. Shocking behaviour at local dances has been caused by hundreds of seasonal workers at the freezing works: the solution at the Starnight dance hall has been a ban on jeans, and all males must wear ties. “Entertainment-wise, Southland needs an injection.”