It was the year of ‘Gutter Black’ and the dark syringe symphony ‘Blue Lady’. But to many in 1977, Hello Sailor, with their lanky hair, bellbottoms and Keith Richards scarves seemed as old and tired as the Howard Morrison Quartet.

It was time for a change of the guard, the year of punk. A mouthy crew of DIY musicians with a torn and frayed look and crucially, cropped, dyed hair, formed up and behaved badly at messy gigs in Auckland. They looked like David Bowie’s bastard brats.

Two of those sulphurous bands, the Suburban Reptiles and The Scavengers, came to Wellington to play at the student arts festival.

In August, two of those sulphurous bands, the Suburban Reptiles and The Scavengers, came to Wellington to play at the student arts festival.

The musicians and their management were already media tarts. In June, Sunday News profiled the bands, chasing a local angle on the notorious Sex Pistols who’d released ‘God Save the Queen’. They told a shocked journo they were off to the wharf to kill seagulls.

That year, I was a NZ Truth copy boy, trying to get a break in journalism. I knew one thing – the punk phenomenon provided an irresistible replay of the shock/horror/probe formula that helped shift tabloid papers.

At the time, I was reviewing bands like the New York Dolls, Patti Smith and Television for the campus newspaper. And I’d been reading the NME (four months out of date) and listening to The Clash, The Sex Pistols and The Ramones. Lou Reed had just toured.

So I rocked up to the campus to hear The Scavengers’ raw, buzz saw sound. But what hit harder was the shorn locks: long hair had been an unshakeable religion since The Beatles, kind of like the curly side locks and long beard worn by Orthodox Jews.

The epiphany really came the following night when I went to watch the Suburban Reptiles, the angry cuckoo in the nest of a “laid back” line-up featuring art rockers Ragnarok and hippie super group Living Force.

The Aucklanders, chiefly drummer Buster Stiggs, were all style and attitude, openly contemptuous of the student audience and of the “hairy” bands before and after them. I immediately fell in love with singer Zero.

They took ages to tune up. Then, of all things, began by singing the theme song of a National Panasonic TV advertisement, based on the tune of Abba’s hit Fernando. “There is so much more to National …”

Abba? A television ad? It was too weird, too art school, too postmodern for words. The drunken, bearded crowd bayed its disapproval and the mounting aggravation climaxed with Stiggs hurling a drumstick right back at them. Blood on the Floor! There was my story. 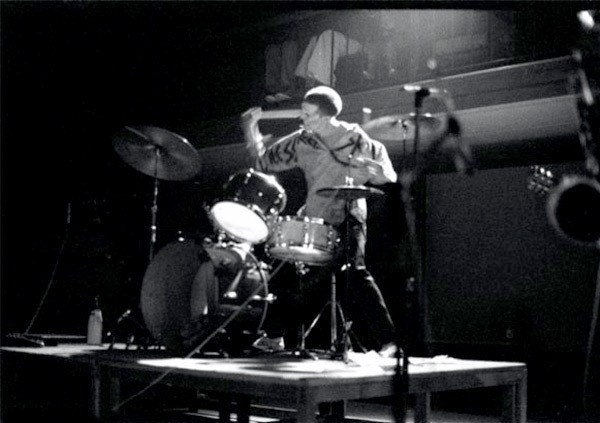 I dashed off an article to my editors at NZ Truth sensationalising the “hooligan” punk bands visiting Wellington. My editors loved the piece – and I was pretty much hired as a reporter on the strength of it. The headline read Punks live down to name. 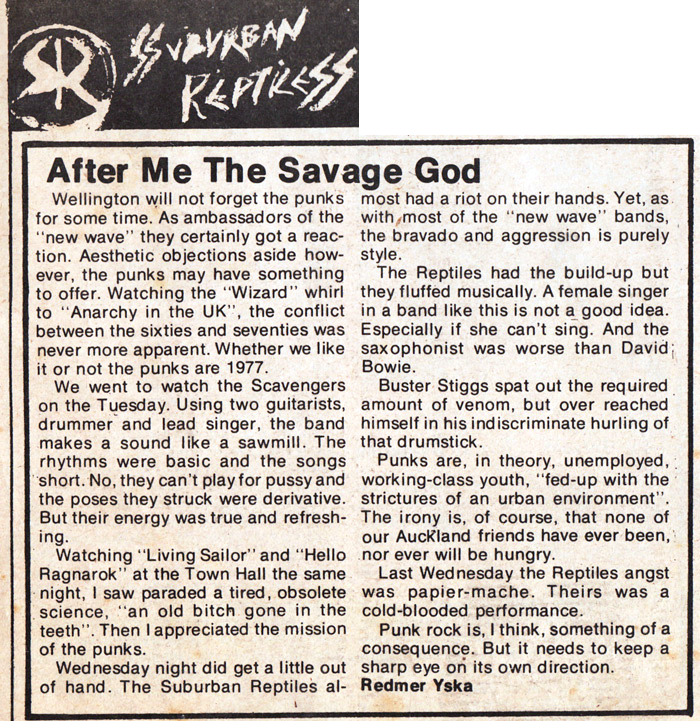 Over the next year, I would write more about the Reps, providing all the negative attention they could wish for.

Over the next year, I would write more about the Reps, providing all the negative attention they could wish for. You might say the relationship was symbiotic – they made for a great headline and I was also providing the oxygen of publicity.

In December 1977, for example, we conspired to promote their new 12-inch single ‘Megaton’. The result was “Achtung! They like the sign” an outraged NZ Truth story about the use of Nazi insignia on the cover, naturally showing a copy of it. 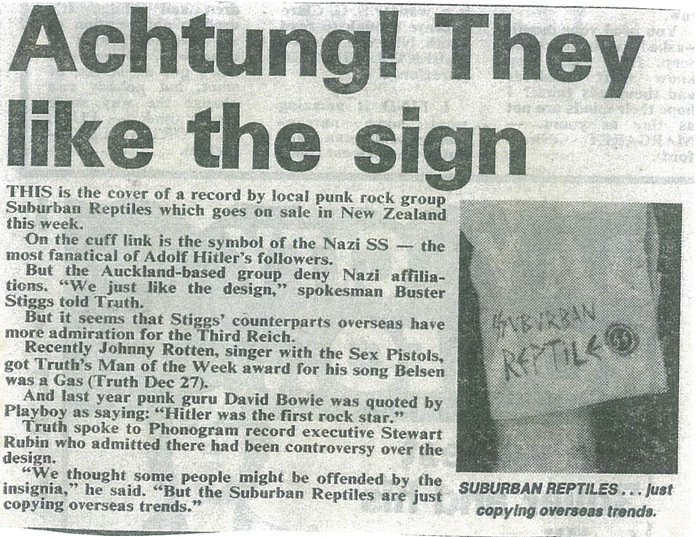 “We just like the design,” Buster told me, without a trace of irony. The Rock Against Racism campaign would soon put an end to pop’s ugly flirtation with fascist ideology, spearheaded by David Bowie [who later confirmed he was “not a fascist”].

In April 1978, the Reps popped into NZ Truth’s Wellington offices with more harrowing tales of recent scraps with audiences. The result was a story headlined The punks took a beating and possibly the greatest words I ever typed for NZ Truth:

“When punk rockers, the Suburban Reptiles insulted a tavern audience at Palmerston North, the group didn’t bank on Manawatu muscle … the puny punks were no match for the burly Manawatu crowd and they got a thrashing.” 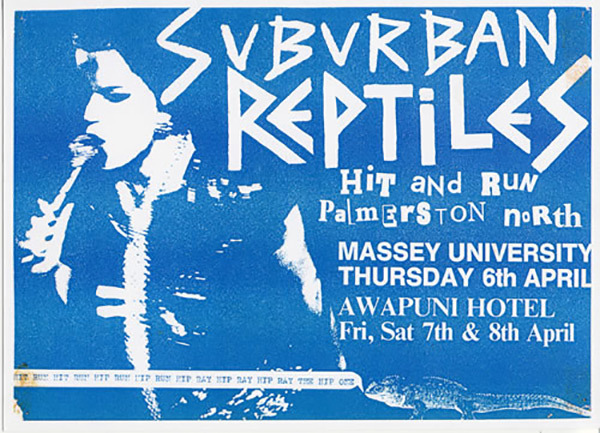 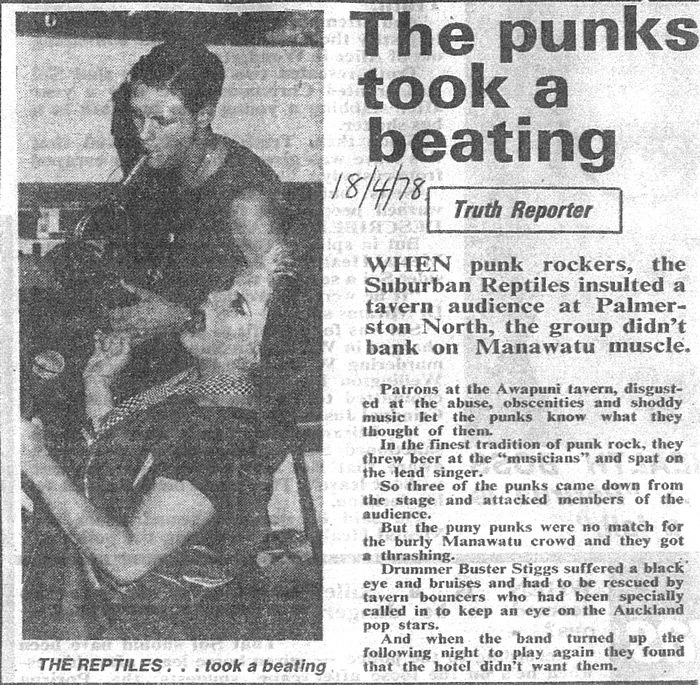 Baker’s book on their 1965 tour, Don’t Bring Me Down … Under: The Pretty Things in New Zealand, 1965 (by Mike Stax, Andy Neill & John Baker – Ugly Things Publications, San Diego, 2006) is a classic, full of colourful tales of this legendarily revolting bunch of drunken, long-haired louts. Or were they?

In September 1965, the band was splashed over the front page of NZ Truth under the headline: Pretty Things’ shock exhibition.

In fact NZ Truth reporter Bruce Kaplan had made the whole thing up, leaving the paper’s sub-editors to craft  the “absolutely disgusting”,”the lowest” and “young hooligans” headlines.

NZ Truth presented what sounded like an eyewitness account of what happened that night at the New Plymouth Opera House. Drummer Viv Prince was said to have “drank whiskey continually. The alcohol ran down his chin and on to the floor.”

Prince, who favoured a leopard skin pillbox hat, also reportedly crawled around on all fours, holding a a burning newspaper close to the curtains on the edge of the stage. Bare-footed crooner Sandie Shaw was right in the middle of her act.

The only trouble was that virtually none of NZ Truth’s report was true.

The only trouble was that virtually none of NZ Truth’s report was true.

“I plotted with Viv Prince,” Kaplan told Baker in an interview. “We fed off each other.”

NZ Truth’s expose meant the band was guaranteed full houses and a transfixed media for the rest of its national tour. The band was accused of trashing their motels and being rude to all and sundry.

Prince was even accused of Buster’s trick of throwing a drumstick into the audience.

In what he called a “public protest”, Prince later burned a copy of NZ Truth at Auckland’s Top 20 nightclub. Kaplan’s comment that Prince “bears a remarkable resemblance to a mobile garbage heap” was later picked up by the Fleet Street press.

The Pretty Things flew out of Auckland, leaving behind what Kaplan called “a legend of loutishness from the Bluff to Auckland”. It had all been a media beat-up.

Which brings me back to the Reptiles. The band broke up in October 1977, possibly still suffering the after effects of “Manawatu Muscle”.

Nearly 40 years on, the band photos still look immaculate. The musical legacy, on the other hand, sounds rather, how can I put it … puny? Cue ‘Gutter Black’. 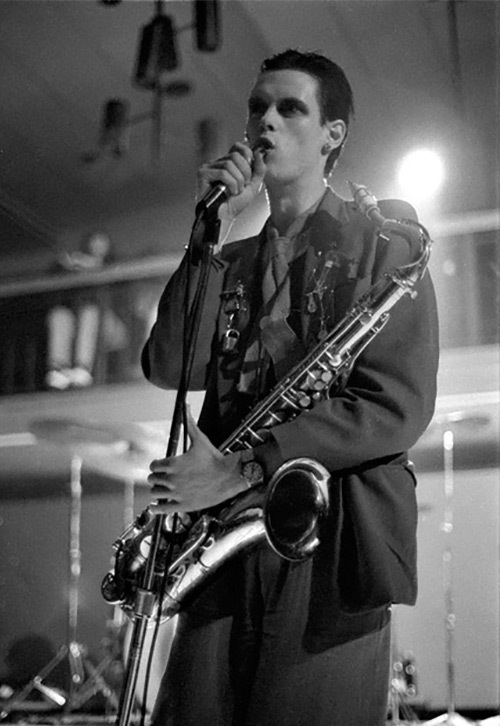 Simon Grigg on the Suburban Reptiles trip to Wellington

Related:
“These, believe it or not, are men!” – The Pretty Things in New Zealand, 1965
Suburban Reptiles
The Scavengers
Back to top
Search // Rapu Music Index // Kuputohu Puoro Special Content // Ngā Kai Motuhake