Pushed out of inner city Auckland by a lack of venues and the hard shadow of Auckland’s bootboys, by the early 1980s punk rock was firmly ensconced in the suburban heartland of West Auckland.

Weekend punk dances at West Auckland halls pulled big crowds to see a swelling number of punk bands from the west including The Dum Dum Boys and Famous Five, and later in 1982 and 1983, The Henchmen, The Mormons, The Orphans, The Executioners, The Plunket Boys, Sick Dogs and Vicious Circle. 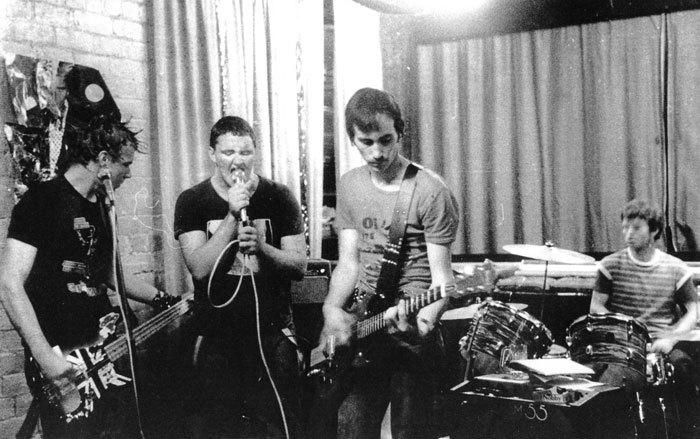 The hall scene thrived for a while, until the violence they were trying to avoid began walking through the doors. If it wasn’t the bootboys, it was the over-zealous team policing units. It was a hard proving ground. By the time hall diehards Vicious Circle (Allen “Nobby” Stephenson on vocals and guitar, John MacFarlane on bass , Chris Boulter on guitar and Mac MacDonald on drums) played the Mount Roskill Memorial Hall in mid-1983, the hall scene was an urban nightmare. 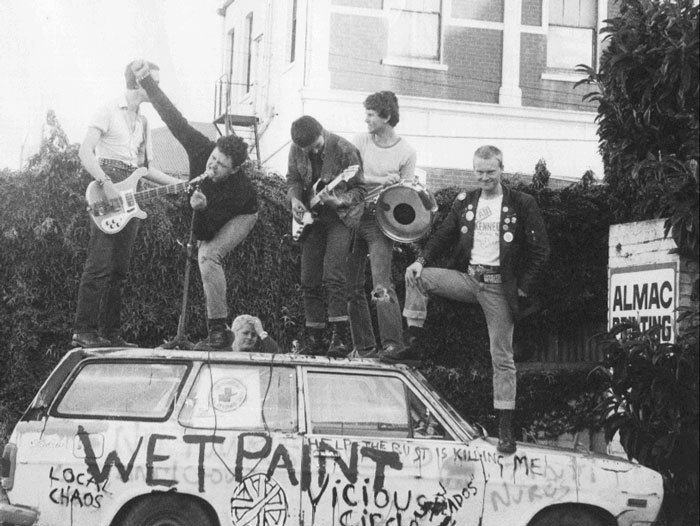 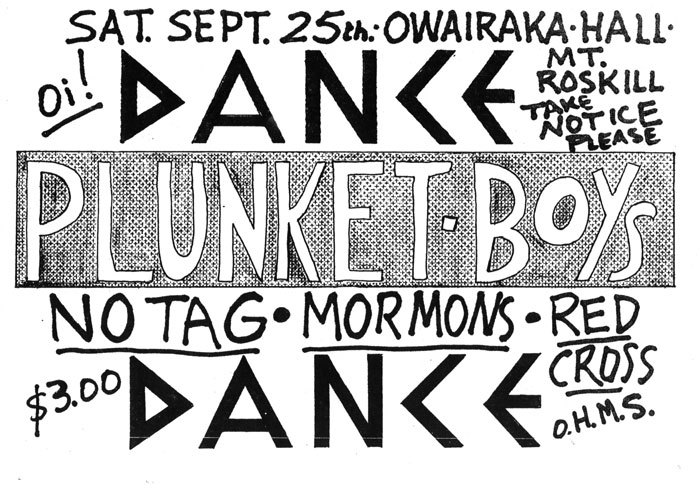 The Plunket Boys, No Tag and others at a Mt. Roskill hall show, 1982

Bootboys roamed the hall, beating on punks with baseball bats and with the inevitable heavy police presence it was just too much.

Bootboys roamed the hall, beating on punks with baseball bats and with the inevitable heavy police presence it was just too much – the hall shows died. The Auckland punk scene had become the stereotype it had always courted – violent, nihilistic and self-destructive. It wasn’t worth hiring halls any longer. It was just too dangerous. Too many fights and too many police, and when the police came, they just saw punks.

While many of the groups rose and fell in the western suburbs, Vicious Circle were already survivors of previous punk acts. Guitarist Chris Boulter and bassist John MacFarlane had a past in The Mormons, The Bastards and The No-Ones. Singer Allen Stephenson and drummer Mac MacDonald had been Plunket Boys, and the entire group had been in First Offence.

Vicious Circle entered Progressive Studios in April 1983 and recorded three tracks – ‘Mainstreet’, ‘Ultraviolence’, and ‘Ode To Brezhnev’. The first two later appeared on a double-sided reissue single in 1998, shared with The Plunket Boys.

In August 1983, Vicious Circle returned to the studio again to record ‘One Finger From Death’ for Last Laugh Studios’ Campaign for Nuclear Disarmament (CND) fundraiser, Celebration. Billed as Dead Image, Vicious Circle sounded out of place amongst the 1960s debris and traditional peacenik company on the tape, but in many ways, their dark, succinct punk rock nihilism got closest to the sense of threat that hung over New Zealand in those days. 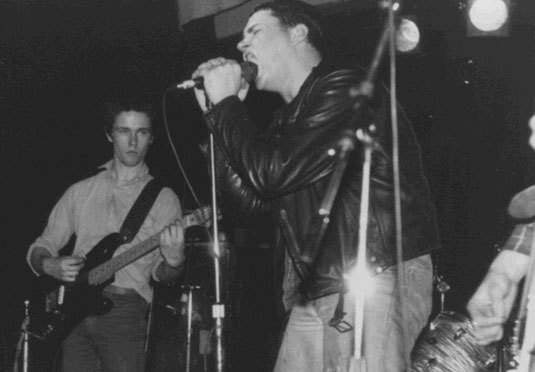 The divisive Prime Minister Rob Muldoon was still in power, the police were harsh judges where punks were concerned, and mid-year (the weekend ‘Finger’ was recorded), a grey battleship, the USS Texas, sat in Auckland harbour, a not-so-subtle reminder that sabre rattling US President Ronald Reagan was in the White House, where his brinksmanship made nuclear death seem at times only a finger away. 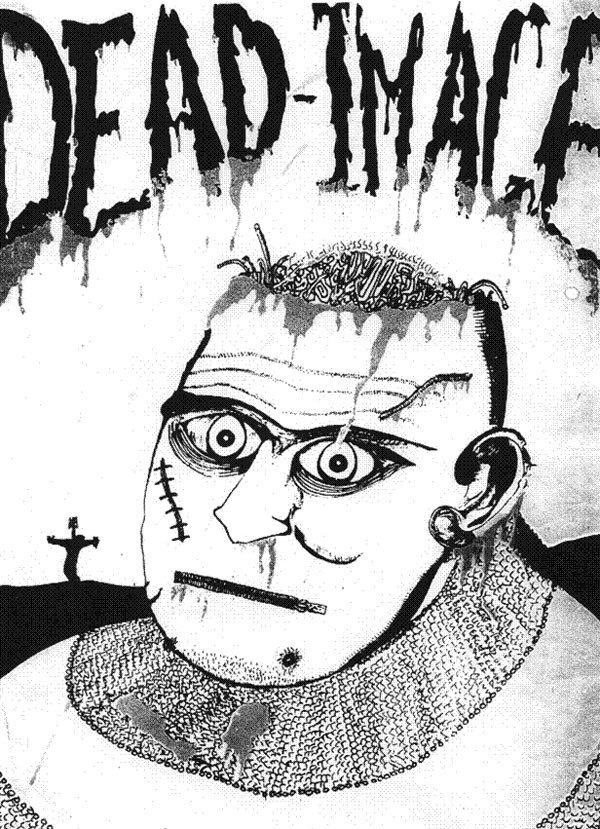 Dead Image finally found firm ground and had a good run of shows in late 1983 with The Henchmen, playing Mainstreet, Windsor Castle, and SPAM, the short-lived musicians cooperative venue in upper Symonds Street. They lived just across the bridge from the venue in Grafton and played there often on Punk Sundays. They played shows with The Gordons, Flak, Eight Living Legs, K4, The Henchmen, Children’s Hour, and The Exploding Budgies. 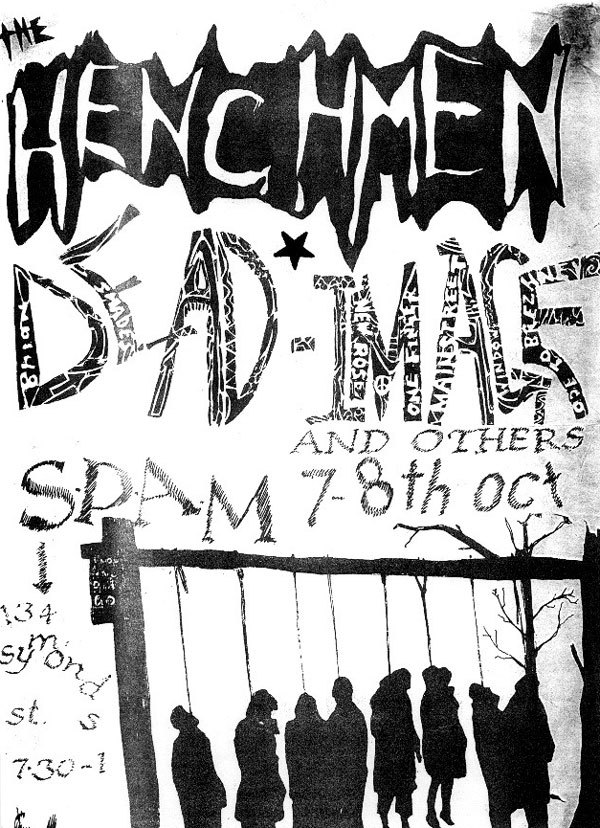 Early in 1984, Kevin Taylor from The Plastic Pegs joined on drums and Tony Chandler from North Shore punks Public Enemy was added on bass after Chris Boulter was ejected. This line-up recorded the demos that would become the Or’s Well In ‘84 EP, posthumously released in 1987 on Simon Coffey’s Onslaught Records. 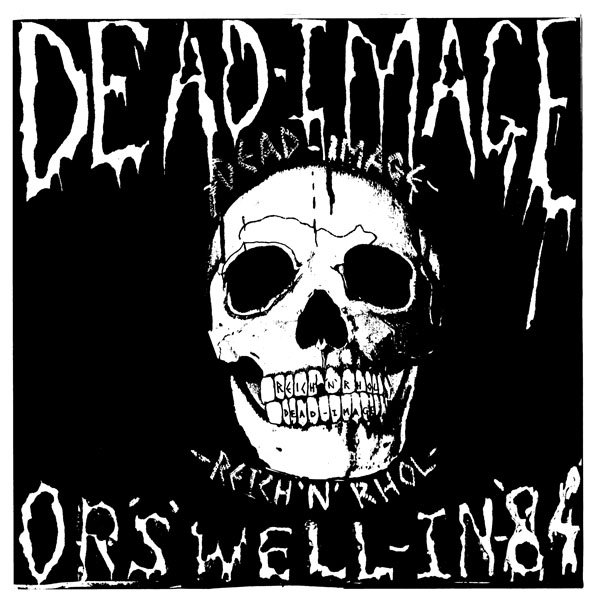 ‘Change For A Change’, ‘Schizophrenic’, ‘Shadows’ and ‘Number’s Up’ were sharp, intelligent, punk rock, driven by hard guitars and Stephenson’s dark, desperate words:

“Over the wall and into the car, you’re driving fast, you’re driving far, had to get away from the bricks and wire, heading for a funeral pyre. Your number’s up,” he screams in ‘Number’s Up,’ the EP’s closing track.

Billy Williams, most recently with The Henchmen, replaced Kevin Taylor after a violent altercation at a Mainstreet show with The Plastic Pegs.

Chandler: “One of their supporters nutted Rotten Russell, Allen’s mate. Russell and another guy chased him up on stage while The Plastic Pegs were playing and everyone got in there and basically we beat up The Plastic Pegs and trashed our own drummer’s drum kit. I smashed Kevin’s hi-hat stand on the stage. That was the last time Kevin played for us.”

Williams was credited with Taylor’s efforts on the posthumous Dead Image EP, released in 1987.

The group’s best-remembered line-up was now complete. It was an interesting mix of personalities. Chandler: “Mathew Ahern lived in Papatoetoe. He was a good guy, a little bit edgy. Allen was the force in band. He wrote all of the songs. The lyrics definitely.”

In August 1984 Dead Image were on the bill the At Last The 1978 Show with a punk “supergroup” made up of the Instigators, The Androidss, The Spelling Mistakes, The Screaming Meemees and No Tag members. It was compered by Harry Ratbag, the Herco Pilots bassist and acerbic columnist around town.

At Last The 1978 Show, with members of The Instigators, No Tag, Spelling Mistakes, Androidss and The Screaming Meemees

The ad called it, somewhat bizarrely, the “Punk Olympics”. Amid the (then) rather dubious spectacle of old punks reliving their glory days, it was left to Dead Image to provide the one small spark of punk action.

Chandler: “We had a whole lot of trouble with a microphone, which Allen stuck in a pint of beer, and we had a big argument that night with The Androidss. They wanted to smack our heads in.”

At the group’s only out of town show at a rugby league hall north of Hamilton with The Exploding Budgies, a busload of skinheads turned up. All the windows in the hall got trashed, and a couple of people got beaten up. 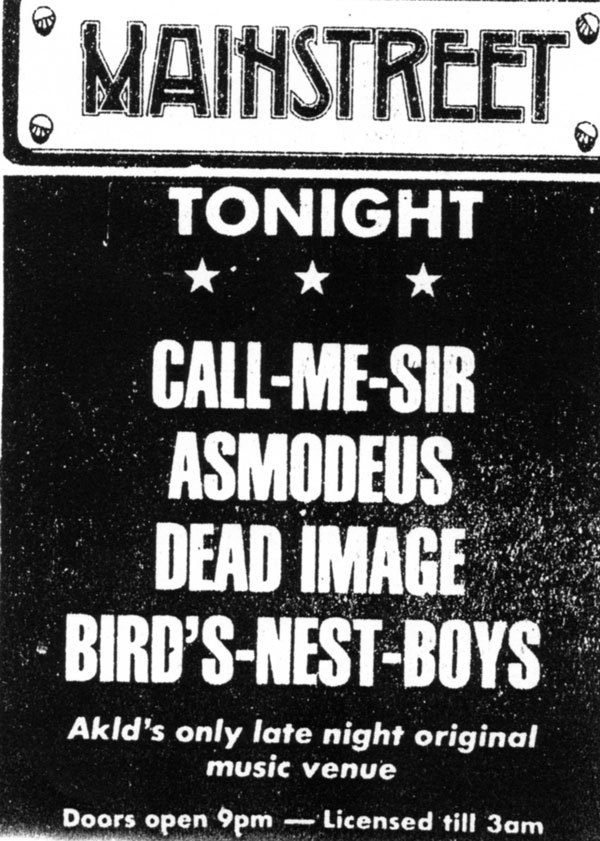 Chandler: “We were hunted by the skinheads. I hated them at sight. I can remember sitting in a room out the back after we’d played, and I wouldn’t come out. They put one of their own guys who came down with them in hospital with a fractured skull after a right good kicking. It was just nasty. There was a band playing with us that night, and Jaffa, one of the reasonable skinheads, his younger brother was in it. Those weren’t bad guys.”

Billy Williams: “The skins just pissed us off. We couldn’t do a gig without them turning up. It discouraged a lot of people from coming to see us; there were a lot of people into us. I never got threatened by them, but they were just a pain in the arse.”

They were already banned from the Windsor Castle, adding Mainstreet to the list in November for vandalising the band room and spraying graffiti.

In Auckland, Dead Image were a fitful live presence through much of 1984, a situation not helped by a rowdy and destructive 1983 year-end party at the Lab Studio. They were already banned from the Windsor Castle, adding Mainstreet to the list in November for vandalising the band room and spraying graffiti in the soon-to-be demolished cabaret.

It was a wild night out on the dance floor as well. Chandler: “That last gig at Mainstreet, we wiped the floor with them and chased them down Queen Street. That was the last time we had any trouble with them. After that I drifted away from the band. It was getting a bit of a hassle with work. We were practising twice a week and only playing once every two months.”

The men, the myth and the reality

To sidestep the bans and get playing again, Dead Image decided to change their name to The Warners, bowing out as Dead Image in early 1985 at a Performance Cafe on Symonds Street with Christchurch’s No Idea.

They were already The Warners when Dead Image’s first major interview appeared in June 1985 – ‘The Men, the Myth and the Flab’, by Celia Patel (later of King Loser) in Book of Bifim. In it, the band are optimistic, talking about the addition of new guitarist, Jon Baker (Deep Throat/ Call Me Sir), cheekily dissing local TV stars and DJs, and reminiscing about good shows gone bad. Like the time they got the plug pulled on them at Beachhaven, when the noise control officer clocked them at 130 decibels (a jet is 120 dB), and the cool dance at Piha, where the Armed Offenders Squad turned up.

Chandler: “They tried to arrest Billy because they reckoned Billy was running around with a gun. These wasted surfies thought it would be a laugh to ring up Henderson police and say that the drummer pulled a gun on the crowd.

“We were sitting outside when they arrived. We’d already played. The cops made a beeline for me and said, ‘You look like the only sober one here (I drove out there). What’s going on?’ His mate had a rifle over his shoulder and the Inspector had a gun on his hip. They said, ‘Well, we’re gonna find out who it was. We’ve driven all the way from Henderson and were gonna find who it was.’

“We went outside and someone grassed up this surfie and his girlfriend. They owned up to it straight away and got pummelled by the cops. The cop smashed the surfer’s head into the roof as they put him into the car.”

Inevitably, the interview talk turned to the violence and bootboys running amok, and the climate of fear that killed venues, audiences and chances of gaining a bigger following, and weariness crept into the tone. They were tiring of the myth. 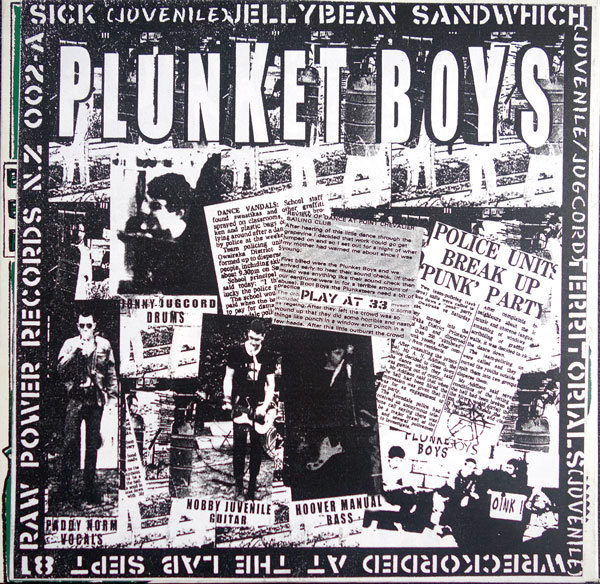 The Plunket Boys 1998 side of a 12-inch EP issued on Simon Kay's Raw Power label with Vicious Circle on the other side. The covers were glued over copies of The Chills Rolling Moon covers acquired from Flying Nun. 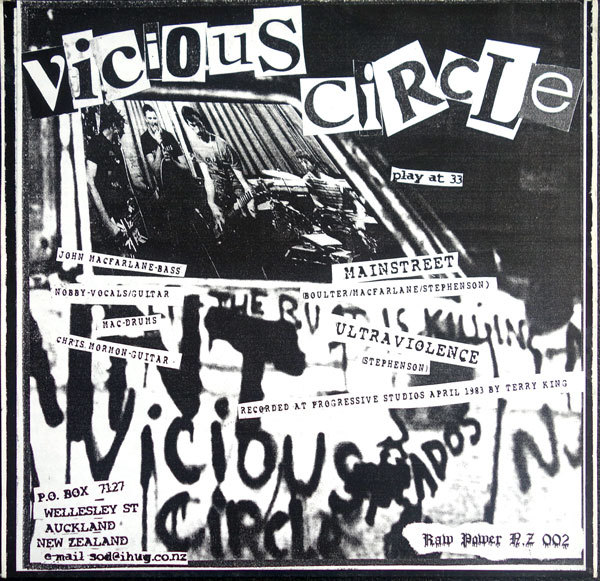 The Vicious Circle side of the EP

In 1997, Auckland punk reissue label Raw Power Records released Metallic OK, which collected up the Or’s Well In ’84 EP with previously unavailable live tracks from performances at Mainstreet, The Performance Café and The Windsor Castle venues. A Vicious Circle single (‘Mainstreet’/ ‘ Ultraviolence’) backed with unreleased songs from The Plunket Boys (‘Jellybean’/ ‘Sandwich’/ ‘Territorial’) followed on the same label in 1998.