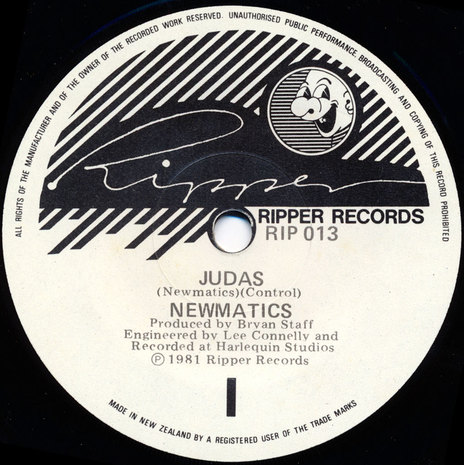 The concept for what would be New Zealand’s first post-punk indie label came from two Auckland radio people, programmer Jon Doe and announcer Bryan Staff, who talked in late 1978 of a compilation of some of the new bands that Staff was featuring on his popular 1ZM Tuesday evening show. Staff would take in demos and then record the bands he liked in the Radio New Zealand studios in Auckland's Durham Lane West (ironically in a now demolished building next door to Zwines, the city's leading punk club).

Staff would then play the resulting recordings in on his show. It was a win-win for the bands and Staff, and it occured to the pair that there was probably a market for the best of these, focusing on the wave of new punk bands filling the venue next door. 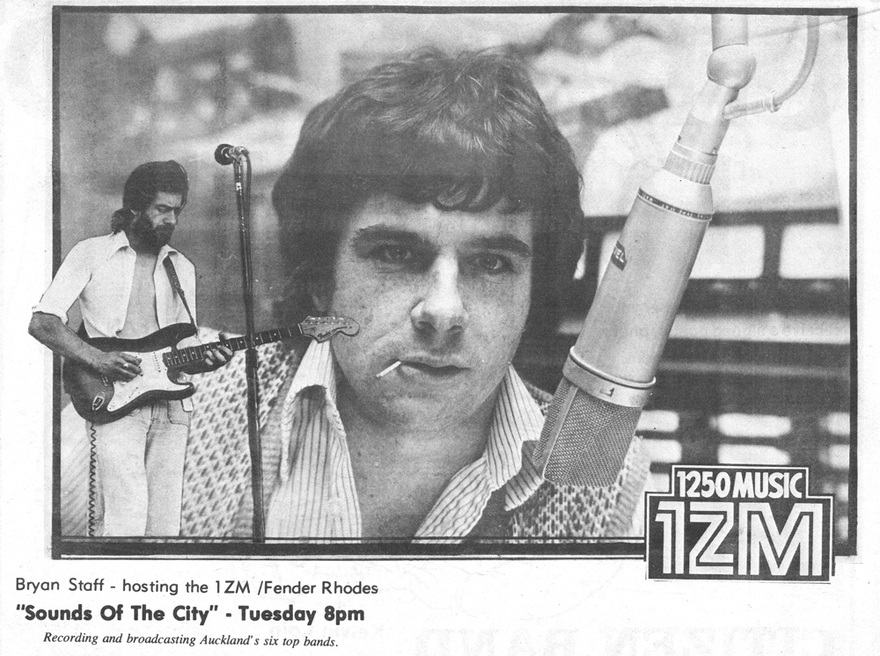 Jon Doe had lived through the early days of the UK punk explosion while living in London in 1976-77 and was keen to capture the same sort of raw energy he now saw in Auckland.

Before the concept could be realised, Doe was posted to Christchurch and what was to become the Ripper label became solely Bryan’s baby. Despite losing his partner he progressed the idea and thought about using the release to fund his plans for a label that was more in touch with the young scene than the major labels and many of the older indies.

The resulting compilation album was the legendary AK79, a collection of Auckland punk and post punk bands that exploded onto a moribund Auckland recording scene, selling out its first pressing instantly in late December 1979. The pressing was funded by selling the initial run of 250 albums to Roger King at the Record Warehouse store, also in Durham Street West. King paid upfront allowing Staff to pay the manufacturer.

A second pressing hit the stores in early 1980, distributed by Ode Records, as were the the next couple of releases (although the reality was that Staff mostly sold the releases to stores from his Morris van).

AK79 inspired the founding of other indie labels, but Ripper was only getting started. Bryan Staff then took on former Split Enz bassist Mike Chunn as a partner and followed AK79 with a single by The Swingers and several important double A-sided singles featuring tracks from: Graham Brazier b/w A Ripper Bunch Of Blokes, Proud Scum b/w The Terrorways, Screaming Meemees b/w Newmatics and Spelling Mistakes b/w Whizz Kids. 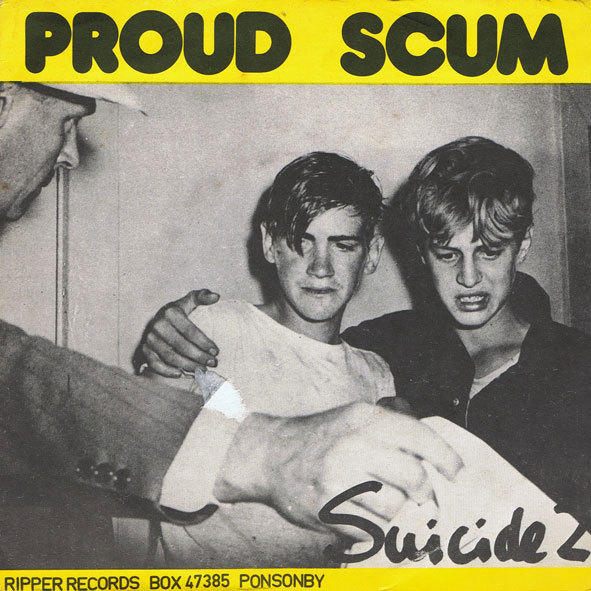 These singles were not only very influential but also rather good and they have all become hugely collectable over the years with The Terrorways b/w Proud Scum 45 selling for many hundreds of dollars in the USA.

The second single on the label was by The Swingers – a fortuitous signing for the label. ‘One Good Reason’ backed with ‘All Over Town’ was both a hit (No.19 in May 1980) and a record that brought the massively popular Phil Judd led trio into the Ripper fold, and Ripper put the band into Mascot Studios where they recorded a number of tracks (most of which remain unreleased).

Moving distribution to CBS in 1980 (The Swingers single was the first via the deal), AK79 was reissued on both LP and cassette, and Ripper/CBS licensed further Swingers recordings from Mushroom in Australia when that band signed a deal with the Michael Gudinski owned Oz indie. The next single from the band was the monstrous and era-defining ‘Counting The Beat’ which gave Ripper its only No.1 (in April 1981).

Over the next couple of years Ripper issued a bunch of reasonably important post-punk records, including two by the Instigators, one each from Otis Mace & Rex Reason (a great cover of the old Gene Pitney tune ‘Mecca’ produced by Don McGlashan), and Pop Mechanix, plus the seminal ‘Auckland Tonight’ from The Androidss, a Christchurch band paying homage quite wonderfully to their new home.

There was also a single by rebellious National Party MP Marilyn Waring – a take of John Lennon’s ‘Working Class Hero’ that perhaps should best have been left in the studio.

A DIY album by Techtones, TT23, was recorded by Doug Hood in mid-1981, largely pre-dating and predicting the sound that was to become known as the Dunedin Sound. 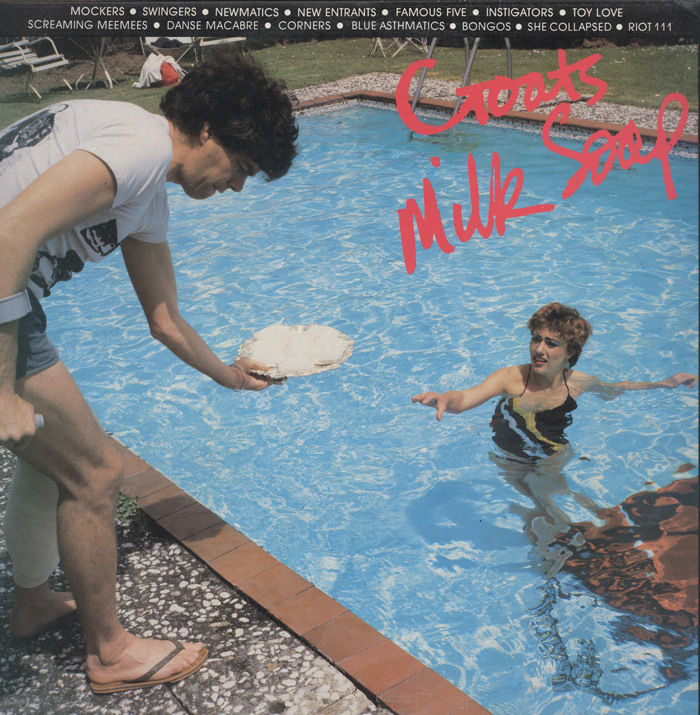 The late 1981 Ripper compliation Goats Milk Soap. The people in the photo were Garry Sommerville, Bryan Staff's partner in XS Café, and his flatmate Barbara.

In late 1981 Bryan Staff moved to Wellington to work for 2ZM. Mike Chunn had left the label that year, taking Pop Mechanix with him and signing them to his new XSF label (Chunn was the A&R manager at CBS who distributed both Ripper and XSF). In 1982, Staff changed Ripper’s distribution to Jayrem, via whom he released two singles by The Spines and then, after the Rip Shit or Bust punk compilation and a mini-album from ex-Instigator Sonya Waters, he wound the label down.

AK79 would be jointly reissued by Propeller Records and Flying Nun in 1993, with another 12 tracks added to document the era it came from. An unofficlal double vinyl version would appear in limited quantities for the 2008 AK79 reunion gigs. The odd track has appeared on compilation albums but much has long been unavailable.

Since early 2014 the Ripper catalogue is now owned by Propeller Records and a reissue schedule is planned with AK79 being the first release. 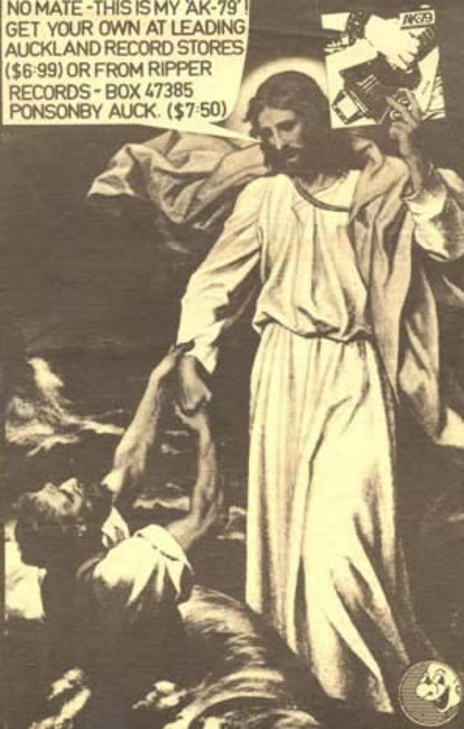 Ripper Records can be found here.